Vodka sauce has additional layer of lushness and richness thanks to the addition of cream and deepened flavor thanks to a bit of vodka. 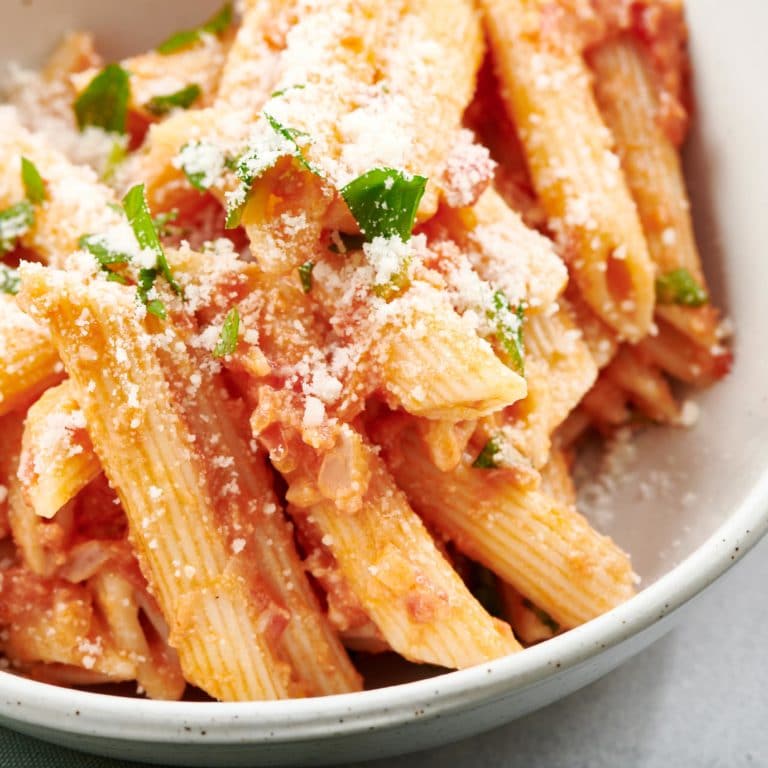 I am no sauce snob.  Yes, I make my own, frequently.  Yes, I often freeze various pasta sauces to pull out on a moment’s notice.  Bolognese, meat sauces of all kinds, plain old tomato sauce, all tucked into the freezer for defrosting and quick dinners.  But I also am never without a couple of jars of store-bought sauce, which have saved me on numerous occasions, and saved my family when I am out and about on even more.

And it is vodka sauce that I keep on hand more often than not, which has an additional layer of lushness and richness thanks to the addition of cream.   I toss it with pasta, I make pasta casseroles with it, I make English muffin pizzas with it, too, sometimes.  But making your own is even better.  The addition of fresh cream to fresh sauce is kind of breathtaking, in my opinion, and give how simple it is to make, it’s well worth the time and energy to treat yourself and your family.

Is there Vodka in Penne alla Vodka?

Yes, there is!  But it’s a very small amount, and the alcohol burns off in the cooking, so you’re not going to get tipsy from this sauce, much less drunk.

But not all of the alcohol will cook off, so if you are pregnant and being very cautious about alcohol in your food, you may want to just skip the vodka.  You will still have a terrific creamy tomato sauce, but it won’t be quite as deeply flavored.

Can Kids have Vodka Sauce?

Same answer: the consensus is that kids can have vodka sauce. There truly isn’t enough alcohol to give anyone a buzz, but you may want to omit it, or find another tomato sauce (see below!).  I personally am fine with it, but I would never want to tell anyone else what to do with booze + kids or booze + pregnancy.

What Does the Vodka Do in Penne Alla Vodka?

Vodka, as with all alcohol, is a conduit of flavor, so you don’t really taste the vodka itself, but rather it enhances the flavor of the sauce as a whole.  It helps concentrates the taste of this creamy, pink-tomato sauce, and doesn’t give the sauce a slightly alcoholic flavor, like wine can. It also helps the sauce become more cohesive, with the cream melding with the tomatoes.

You really can use any vodka you have on hand – it doesn’t have to be a pricey bottle.

Penne alla Vodka: Vodka sauce has additional layer of lushness and richness thanks to the addition of cream and deepened flavor thanks to a bit of vodka.

How to Make Penne alla Vodka

You start by making a basic tomato sauce, with onions and garlic and red pepper flakes and of course tomatoes.  Add the vodka and season with salt and pepper.  Simmer for 10 minutes.

Then stir in the cream and oregano (you might want to use a bigger pot than I did).

Add ¾ cup Parmesan, and adjust the seasonings as needed.

Drain the cooked pasta and return it to the pot.  Pour in as much sauce as you like; you will likely have leftovers to use later in the week.

Stir until the pasta is well coated.

Transfer to a serving bowl and sprinkle with the chopped parsley.

Pass additional Parmesan on the side for those who want it.

What to Serve with Penne alla Vodka: 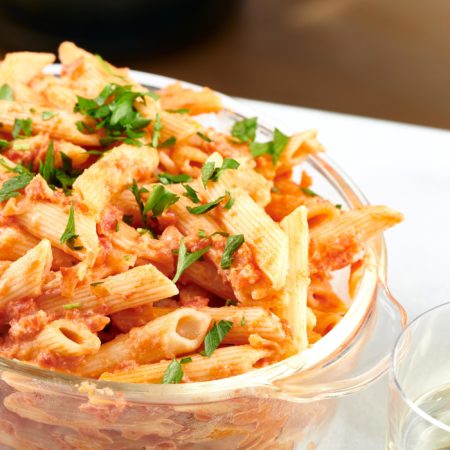 Vodka sauce has additional layer of lushness and richness thanks to the addition of cream and deepened flavor thanks to a bit of vodka.
Yield: 6 People
Prep Time: 10 minutes
Cook Time: 20 minutes
Total Time: 30 minutes