Can you make a Texas Style brisket in the oven? Try this recipe and see for yourself! 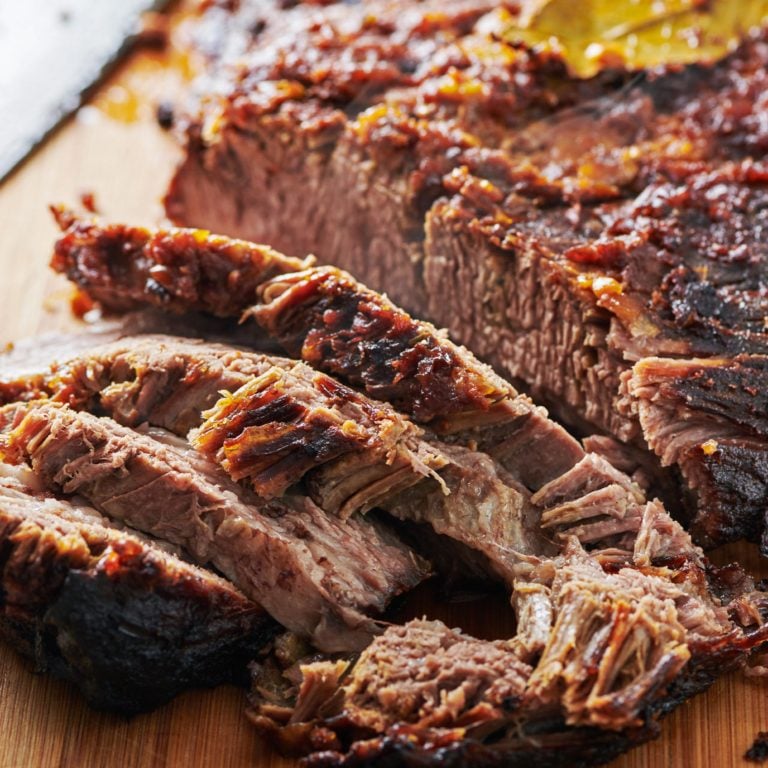 Texas-Style Brisket in the Oven

It is with enormous hesitation that I throw out the idea that this Oven Baked Beef Brisket is Texas-Style brisket. I know that real barbecue brisket is slow cooked in a smoker with low heat….and I know the thought of making Texas brisket in an oven is sacrilegious in some parts of the country and particularly in Texas….but because I don’t live in Texas and I don’t have a smoker, this is where I’ve landed.

I grew up understanding Jewish-style brisket, which is usually cooked in an oven, low and slow, and with a different assort of Mediterranean-ish seasonings and ingredients. There are as many versions of Jewish brisket as there are barbecue brisket, and if want to incite a very heated conversation you might bring up the subject of brisket while there are Texans and Jews in one room. But I wouldn’t advise it.

And I have a non-Jewish Texan friend, Mandy, who grew up in a rural area of Texas who is married to a Jewish guy from D.C. and oh boy do the mothers and grandmothers of these two fine people have a thing or two to say about brisket.

Many Texans, I gather, cook their brisket without much seasoning at all, letting the low and slow smoking and cooking create the magic. Often there is a mop or a sauce of some sort. I pawed through a variety of recipes borrowing a thought here, and a thought there, and came up with this mushed together recipe, drawing from a bunch of rubs and sauce ideas.  And then I added the oven, because an oven-baked brisket was the goal.

The result?  A very happy family and a thumbs up from Mandy, who advised on my mash-up of a recipe, and approved of the result (with the caveat that it’s not REALLY authentic Texas brisket, which I am well aware of). It’s fall-apart tender and truly savory, but aside from planning ahead so you can let the rub flavor the meat, it’s downright easy.

Also worth noting — there are certainly Texan Jews, or Jewish Texans, and they are very fortunate in the brisket department.

Oven Baked Beef Brisket: Can you make a Texas Style brisket in the oven? Try this recipe and see for yourself!

You will want to coat the brisket with the rub and refrigerate it for up to 24 hours before cooking it. And then after it’s cooked, you can either slice and serve it after the 20 to 30 minutes resting time, or you can refrigerate the cooked brisket for a day or two, skim off any extra fat, and warm it in its sauce in a 300°F oven before serving.

How Long Does it Take to Cook Beef Brisket in the Oven?

For a 5 pound beef brisket you will start the meat in a 300°F. oven, in a covered roasting pan and bake for 3 hours.

Once you add part of the sauce, re-cover the pan, and continue cooking in the oven for another 2 hours or so, or until the meat is just about fork tender. Remove the foil and continue baking for another 30 minutes until the outside of the brisket has browned up and gotten a bit crusty. The total time for this 5 pound beef brisket recipe is about 5 1/2 hours at 300 degrees, mostly covered, until the last half hour. That’s how you get the nice crust and the moist, tender slices.

How Long to Cook a Smaller Beef Brisket

If you have a small piece of meat, say 3 pounds, you should stick with the original 3 hours of cooking with no sauce in a covered roasting pan. Once you add the sauce, continue to bake it in the covered pan, and start checking to see if it has become tender after about 60 minutes You may also want to shorten the final 30 minute cooking time by about 10 minutes. The end goal is a fork tender brisket with a nice crust; then it’s done!

Don’t be tempted to turn up the heat to a higher temperature. Brisket is a tough cut of meat with a lot of collagen (connective tissues) and only low and slow cooking will allow the meat to become fall-apart tender. You can cook the brisket for longer at a lower temperature, but don’t go above 300 degrees or it will likely become tough. Also make sure the pan is well sealed during the cooking process to hold in the moisture. This is necessary both in the initial cooking time with no sauce, and the second part of the baking, once the sauce is added.

How Much Brisket Per Person?

A 5 pound brisket, once cooked, will shrink to about 3 1/2 pounds of meat, so don’t be surprised when it shrinks considerably. Plan for about 1/2 pound uncooked brisket per person; a five pound brisket should serve 10. However, if you have big eaters, round up! And if you want leftovers (and why wouldn’t you) round up! If you are cooking a 7 or 8 pound brisket, just add another 30 minutes to the initial cooking time, and another 30 minutes to the cooking time once you add the sauce (don’t forget to reseal that pan).

How Long to Let Brisket Rest

You cooked your brisket tightly covered (til the end) and low and slow like the recipe directed. It’s now hot from the oven, all sauced up with a good crust – but it’s not ready to slice just yet! You absolutely need to let the brisket rest for at least 20 meat before slicing it. This will allow the juices in the meat, which will have worked their way to the surface during the cooking process, to redistribute themselves throughout the meat. The result: tender, juice slices of flavorful brisket. It will still stay warm, tented with foil while it rests, but the most important thing is that the juices won’t run out onto the cutting board, leaving you with slices of grayish, dry meat.

Cutting Brisket Against the Grain

When you read a recipe and it tells you to cut a piece of meat against or across the grain, it means you should slice the meat crosswise, across the fibers of the meat. Cut of beef or other meat like brisket which are from a much-used muscle of the cow develop strong fibers, which will soften with cooking, but remain intact. Cutting the slices of meat perpendicular to the fibers means that each slice will have only short bits of fiber going crosswise, and the meat will feel easier to chew and more tender. Otherwise long strands of fibers will cause the meat to feel chewy and even tough in your mouth.

What to Serve with Texas Brisket

Texas brisket is often served with any or some of the following: mac and cheese, potato salad, pinto beans, Sweet Potato Spoonbread or sweet potatoes of some sort, okra, stewed greens, and pickled things. When my Mandy’s husband visited her family in Texas he ordered his brisket with French fries, which was a source of amusement for Mandy’s mom. Apparently she actually laughed. Poor little Yankee.

I served this Oven Baked Beef Brisket with Caesar Salad and Tomato, Avocado and Cucumber Salad, which is not authentic, but it was delicious. I’m also thinking Crispy Sauteed Potatoes would be perfect.

And you can also make this Oven Baked Beef Brisket into a sandwich. Here it’s piled onto a brioche bun (which would also make Mandy’s mom laugh, probably). And along with Tomato, Avocado and Cucumber Salad there is also Artichoke, Feta and Roasted Pepper Couscous Salad which would probably make her hysterical.

More Beef Recipes You Should Try: 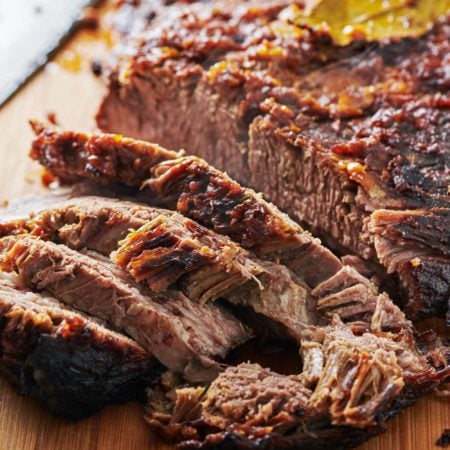 Can you make a Texas Style brisket in the oven? Try this recipe and see for yourself!
Yield: 10 People
Prep Time: 25 minutes
Cook Time: 5 hours 30 minutes
Total Time: 5 hours 55 minutes