A simple herby ricotta is slathered under slices of ripe tomatoes in a perfect summer appetizer or snack. 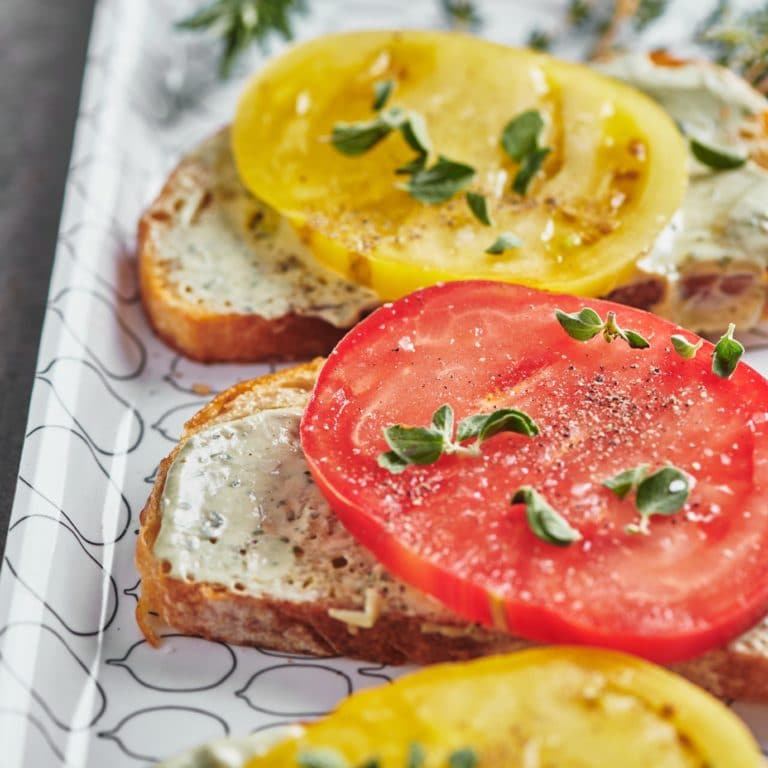 If forced to name my favorite time of the year for entertaining, I think I would pick summer.  I think.  Maybe.

And yes, this is another bruschetta recipe.  Maybe you don’t know that I have a “thing” with crostinis and bruschetta.  It’s one of the healthier addictions and crutches in my life, so no apologies.  Also a thing for blending fresh herbs into things like goat cheese, and ricotta, and cream fraiche, and other creamy substances.  Also not sorry about this. (“Everybody’s got a thing, but some people don’t know how to handle it.” – Stevie Wonder, Don’t You Worry ‘Bout a Thing).

Ciabatta is one of my favorite breads for making bruschetta.  I just found out that ciabatta was invented in Italy in 1982 as a response to the popularity of the baguette.  Seriously?  Wow!

It’s a wide, somewhat flat loaf, usually with a dusting of flour on the crust, fairly airy inside, and if it’s made right, you can taste the olive oil.  Its name translates to “slipper” and when you see the shape of it, that makes sense.  Sometimes the crust is quite hard and crispy, sometimes it’s softer.

Ciabatta is used a lot for sandwiches and panini, in Italy, in the U.S., and in many other places.  I love it for crostini.  Yes, occasionally a slice with have a hole or two in it, sometimes a substantial one, but you can eat those slices.

You can use whatever bread you like, though.  The only thing is that you want it to let the flavors of the herbed ricotta and the fresh tomatoes shine.  And you want the bread to be of some size, around 3 or 4 inches wide and tall, or even bigger if you want to go for voluptuous bruschetta.  If you use small bread a) you can’t get those fat slices of tomatoes on top, and b) you are making crostini (which is fine!)

If you’ve got the grill going, or you have a gas grill that is easy enough to turn on and off, you can grill the bread instead of toasting it.

A simple herby ricotta is slathered under slices of ripe tomatoes in a perfect summer appetizer or snack.

If you don’t have ripe tomatoes, don’t make this.  The end. Heirloom tomatoes are extra nice, and mixing and matching tomatoes of different colors makes for a gorgeous presentation. 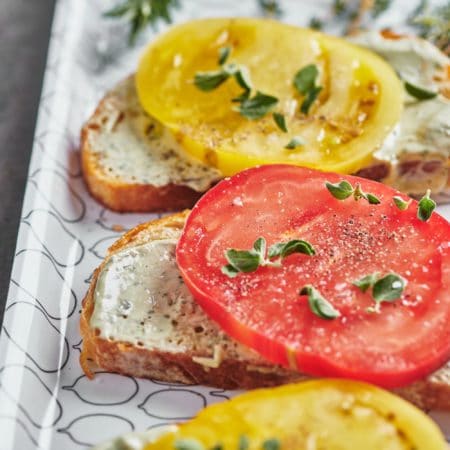 A simple herby ricotta is slathered under slices of ripe tomatoes in a perfect summer appetizer or snack.
Yield: 6

For the Ricotta and Tomato Topping