This is the first thing I think of when I bring home a bunch of gorgeously ripe late summer tomatoes. Use only perfectly ripe tomatoes. 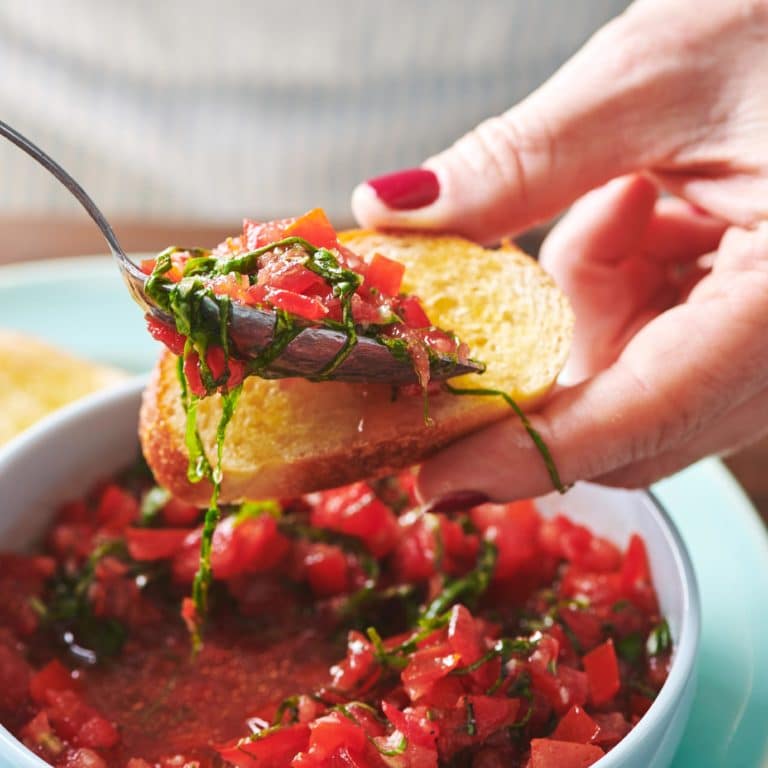 There are a few dish that embody summer in our house.  This is definitely one of them.  Throughout the months of August and September we eat this as often as humanly possible, and it is this dish that made fresh tomato lovers out of my kids and my husband (Gary still does’t care all that much for tomatoes in any other form – crazy man).

There is that moment where the tables at the farmers markets are piled high with all kinds of crazy looking tomatoes with funny names; Green Zebra, Brandywine, Lillian’s Yellow Heirloom, Mortgage Lifter, Black Crim, Purple Calabash, just to name a few.  These often fall into the category of heirloom tomatoes. This is a great opportunity to let the kids have at it, picking the weirdest looking tomatoes they can find.

Then when you get home, and are now wondering what to do with all of these gorgeous specimens, (other than slice them onto a platter, drizzle them lightly with olive oil and sprinkle them with coarse salt, which is another option), make this. The only key to tomato bruschetta is to use perfectly ripe tomatoes, even if they don’t have a goofy name.

What is the Difference Between Bruschetta and Crostini?

This discussion gets a little murky, since there are Italian purist definitions, and then definitions that have become more commonly associated with each word. Since page space is limited for lengthy academic classifications (and this isn’t that kind of book anyway), here is a short version, which will surely raise debate in some circles, but that’s okay.

Crostini translates into “little toasts,” and generally mean plain, thin slices of bread, brushed with olive oil and toasted. They may or may not be topped with different things.

Bruschetta also means toasted bread, authentically toasted on a grill over coals, and usually are thicker and larger than crostini, and often eaten with a knife and a fork. They are sometimes rubbed with a garlic clove, and also may or may not have toppings, which can be more rugged and messier than crostini toppings, because they are served on thicker bread, and usually on a plate, sometimes even with a knife and fork. Try making this with Grilled Bruschetta.

Throughout August and September we should eat this as often as humanly possible. Use only perfectly ripe tomatoes.

You can also make a double batch of the tomato mixture, cook up a pound of pasta and toss everything together for an amazing late summer pasta dish. You’ll probably want to add an extra splash of olive oil, as well as a ladle of water from cooking the pasta to help form a sauce. A sprinkle of freshly grated parm or crumbled goat cheese or a small handful of slivered fresh mozzarella on top of each portion is excellent.

What else to do with those perfect tomatoes?

Tomatoes with Mint Basil Pesto is one idea.  Summer Corn, Tomato and Bacon Salad is another.   Perfect End-of-Summer Pasta Salad, also a contender.  You’ll find something good to do. 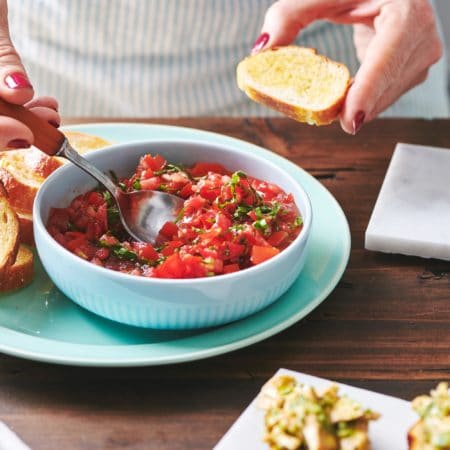 This is the first thing I think of when I bring home a bunch of gorgeously ripe late summer tomatoes. Use only perfectly ripe tomatoes.
Yield: 10 Servings
Prep Time: 15 minutes
Cook Time: 5 minutes
Total Time: 20 minutes