A pile of sautéed mushrooms atop some herby mayo on a tender-crunchy piece of olive oil slicked bread. 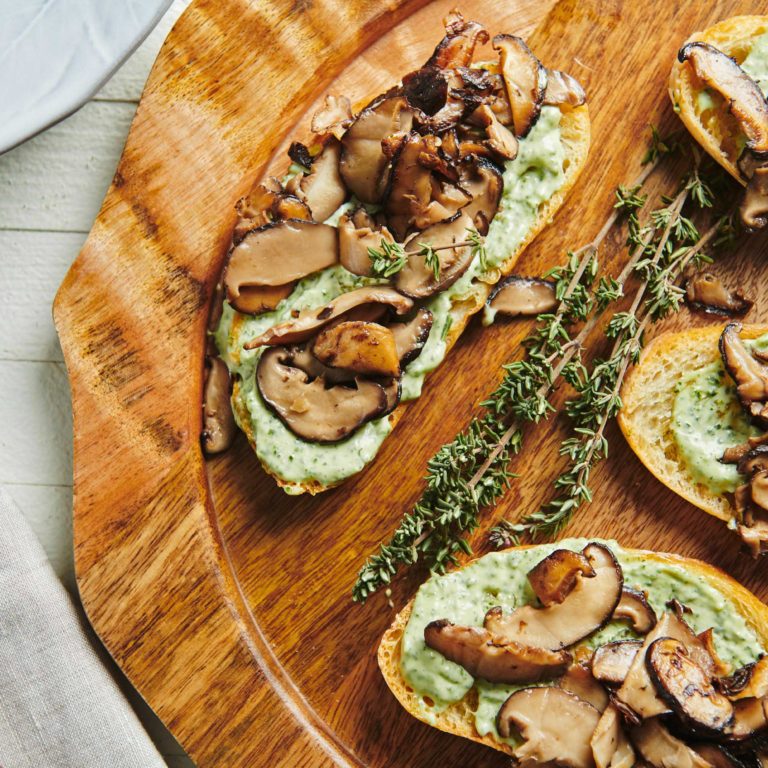 When the boys were little, during the summer there were a bunch of families from the kids’ school that all spent some weekend and vacation time in lower part of Litchfield country in Connecticut.  There were 5 families, all with kids about the same age (Charlie’s year connected all of the families, I had one older child, and there were a smattering of kids in the group trailing down in years to toddler-age).  It was a happy circumstance to be near one another, and the result was many, many an outdoor gathering.

We hosted often.  My memories of this time are probably artificially rosily-colored, as I look back now with one kid a mercurial teenager, and one off at college in Chicago.  I recall lazy late afternoons running into evenings, the adults coasting along in a little river of sprightly conversation fueled by a cooler full of beer and rosé wine.

The age difference between the kids never stopped them from running around like a swarm of bees, changing direction when one appeared from another direction with a water balloon or when Jack, the defacto captain of the group with three years seniority, yelled, “Guys, over here!”  The littler people trailed behind, still part of the gang, but with an occasional “wait for me….!”  Fueled by juice boxes and chips, they mostly kept themselves busy until it was time for dinner.

Except it really wasn’t.  If you asked me what I made on any of those given occasions, I could guess at it, but I really wouldn’t be able to remember what was on the table on any specific day.  I know over the years there were burgers, and grain salads, and green salads, and kebabs and ice cream sandwiches.  And wherever the gatherings were, we always pot-lucked to some extent, and I know my friend Alice brought over peach crisps and Pam arrived with brownies and David always makes a mean guacamole.   I kind of wish I were the type to write these things down, like my friend Jenny of Dinner a Love Story, but while I attempted to keep a little log once or twice, it just didn’t take.

I do know that I made a lot of crostini and bruschetta.  And I still do.  It’s such a low maintenance way to start a party.  You make the little toasts ahead of time, either in the oven or make Grilled Bruschetta if you’re planning to fire the grill up anyway.  And then you can top them in pretty much an infinite number of ways.

When I am thinking about crostini or bruschetta I often reach for mushrooms.  I think a pile of sautéed mushrooms atop a tender-crunchy piece of olive oil slicked bread is divine.  And also yes, I’m back again with another recipe featuring one of my favorite homemade condiments of the year, Herbed Mayonnaise.  Can’t get enough of the stuff.

The kids are all older, and have their own schedules, so inviting these families over and getting a full house of attendees is much more difficult.  But I can see these Mushroom Bruschetta kicking off our next gathering, even though we might not be playing to a full house.

Mushroom Bruschetta with Herbed Mayonnaise: A pile of sautéed mushrooms top some herby mayo on a tender-crunchy piece bread.

And because one bruschetta or crostini is good, but two are better, pair this with any of the following!:

(If you’re wondering what the difference is, between bruschetta and crostini, it’s mostly size, with a few other details that are up for interpretation. 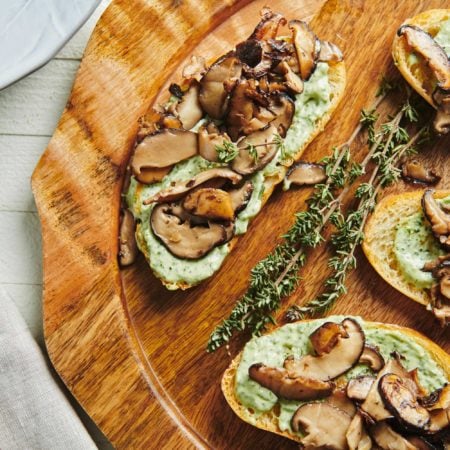