An easy herby sauce brings some simply cooked asparagus to a whole other level. 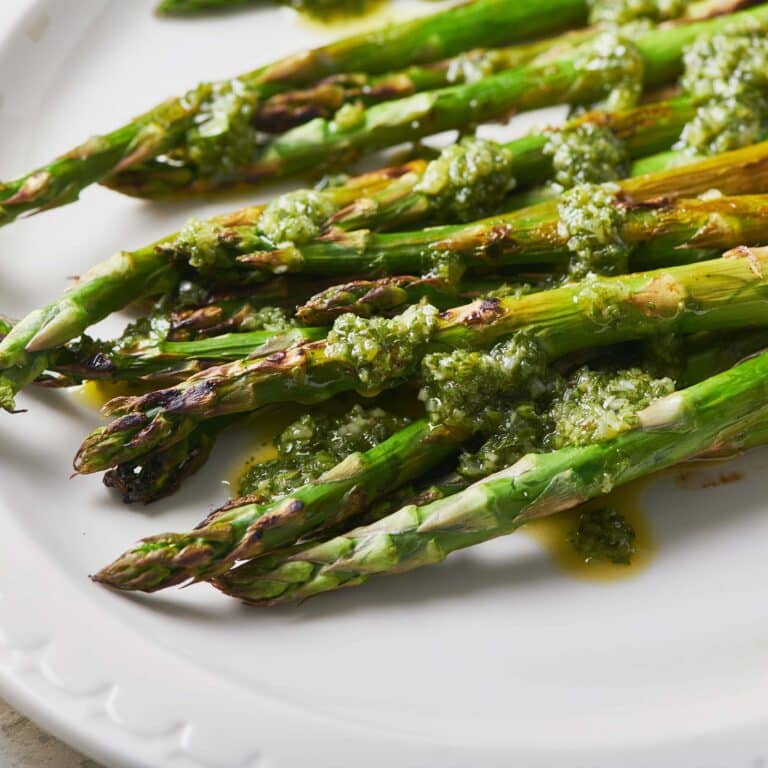 Asparagus time has arrived! Otherwise known as Spring to many of you.

You have two choices when it comes to grilling asparagus (and for a whole lot more on grilling asparagus, click here!).  One, carefully place your spears on the grill perpendicular to the grates so they don’t roll and fall through.  Two, use a grilling basket.  Or I guess, three, play Russian Roulette with your precious asparagus, and sacrifice a number of them to the grill gods.  Three is a bad choice.

You can also roast or broil the asparagus, or use an indoor grill, or a grill pan.  You have many choices in life.  Or at least you have many choices for how to cook asparagus.  You could even steam or saute them, just to put a fine point on it.  You are in control of your asparagus destiny.

Boosting some simply cooked asparagus with a sauce takes it to a whole other level. And you have other choices, too! Make Ramp Chimichurri Sauce instead of using scallions if you are lucky enough to have those at your disposal.  In face, asparagus season matches up pretty neatly with ramp season, so this is a fine and plausible possibility.  Or use “regular” chimichurri sauce, make with parsley and garlic.

Or use another sauce altogether.  Spicy Salsa Verde or Herbed Mayonnaise, or maybe a drizzle, such as Spinach Parsley Pesto.

One of my standard party tricks (or weeknight dinner tactics) is to take a simple prepared vegetables, from cauliflower to potatoes to asparagus, and layer on a bit of a simple sauce.  If feels about 10 times more special than a plain vegetable, and often takes about 5 to 10 extra minutes of time, and but a handful of ingredients.  Use this little tactic, and share in the little shiver of happiness that comes with getting a lot of pop from not much effort.

Asparagus with Scallion Chimichurri Sauce: An easy herby sauce brings some simply cooked asparagus to a whole other level.

This is a vegan recipe, so a great choice for everyone. Oh, and I chopped up some green olives for sprinkling on the top (purely optional), and then promptly forgot to add them before we shot the photo.  I also forgot the optional red pepper flakes.  I loved them on the asparagus, which happened after the photo situation, but I want you to imagine that they are in these pictures.  If you like olives and red pepper flakes.  If you don’t then just enjoy the photos as they are.

What to Serve with Asparagus and Chimichurri Sauce 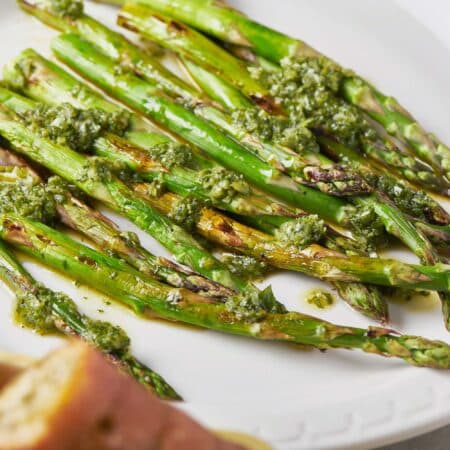 For the Scallion Chimichurri Sauce