Tender cubes of flavorful beef soak up a simple marinade to become one of the best soft tacos ever. 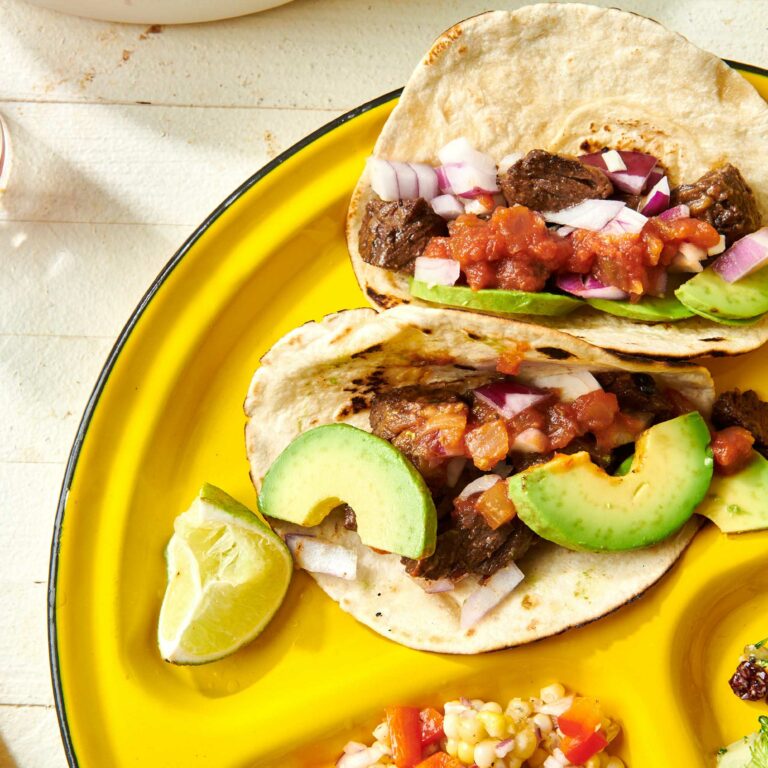 What is a Street Taco?

The term street taco refers to small, soft corn tortilla encased tacos, meant to be eaten out of hand, sold and consumed on the street.  They originated in Mexico as a popular lunch option for time-strapped workers, and then made their way to the U.S., arriving with Mexican immigrants, probably in the very early 1900s.

Mexican street tacos can be filled with any number of things, often meat of some sort.  They might be topped very sparsely, though when you are preparing them to eat at home you can get more ambitious with the garnishes.  On the street they are meant to be eaten in a few bites, and too much filling can get messy.  In fact, that’s the reason many street tacos incorporate two soft corn tortillas: this prevents any saucy filling from seeping through the outside, and I’ve also read that sometimes people redistribute the filling between the two tortillas to make the folding and eating easier.  I stuck with one tortilla, but you should feel free to make that decision for yourself.

(also see How to Warm Tortillas)

This recipe was largely inspired by a recipe I saw William Horst (@hooked_on_bbq) make for @thefeedfeed.  He made his on a griddle on the grill, but I translated the recipe to a cast iron skillet indoors, so we could have them year-round.

I used skirt steak in these tacos, which is one of my favorite cuts of steak to prepare, and one of my guys’ favorite cuts to eat.  You really could use any tender cut of beef here; flank steak is another good and easy-to-find option.

Obviously tacos need to contain small pieces of meat, whether it’s ground meat, shredded meat, thin sliced meat, or, as in this case, cubed meat.  In this skirt steak tacos, the small pieces of diced meat absorb the marinade really well, so there is amazing flavor all throughout.

You won’t get that kind of marinade penetration when marinating a steak of another large piece of meat.  If you allow a large piece of meat to marinate for a long enough time to really penetrate throughout, you run the risk of altering the texture of the meat, particularly if there is citrus juice or another acid in the marinade.  Here the ½-inch cubes allow the marinade to penetrate thoroughly and quickly, resulting in very flavorful beef.

Skirt Steak Tacos: Tender cubes of flavorful beef soak up a simple marinade to become one of the best soft tacos ever.

There are many tacos that benefit from a last squeeze of fresh lemon, lime, or orange juice at the end.  I find this especially true of steak tacos and fish tacos, which really seems to benefit from a final burst of citrus.  Make sure to supply those lime wedges for your diners to squeeze over their assembled tacos.

If you do choose to make these on the grill, Horst suggests thinking about slicing some limes in half and grilling them, cut side down, which will caramelize them a bit and add some more flavor and sweetness to the juice when you squeeze them over your taco fillings.  I love this technique, and often do this with lemons, but switching it up to limes is a great suggestion.

If you wanted to hit these tacos with a squeeze of lime and call it a day, you surely could.  The meat is plenty flavorful on its own.  But most of the time, we like to keep going with our toppings, because topping tacos is just plain fun.

What to Serve with Steak Street Tacos:

You don’t need much – when you think about it, they are a pretty complete little package, what with the tortilla, the meat, and the toppings.  But if you want to round out the plate, think about: 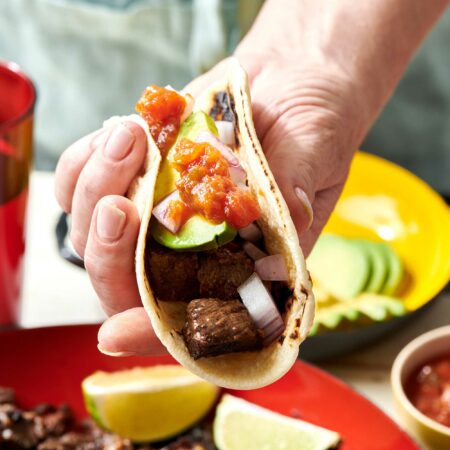 There are actually soft tacos available in many supermarkets that are labeled “street taco tortillas”, which refer to their small size, the size of the tacos sold and eaten out of hand on the street in Mexico and other places where tacos reign king as street food. You can use other 6-inch taco tortillas if you can find the very small street taco tortillas, and just make slightly larger tacos.