This dish feels like an ode to summer.  A Tuscan salad, created to use up stale bread,  dressed with  vinaigrette, and mixed with juicy tomatoes, onions, cucumbers and basil. 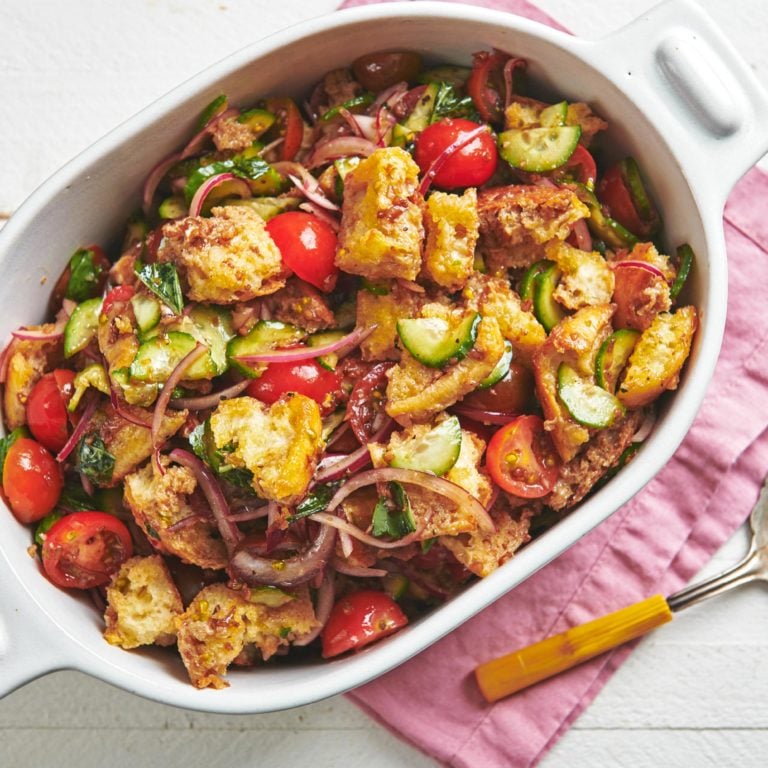 Panzenella is a dish that feels like an ode to summer. It is a Tuscan salad, created to use up stale bread, because Italians are smart and don’t like to throw away food. This classic salad includes some sort of vinaigrette, which soaks into the stale bread (or in this case baked croutons), as well as tomatoes which lend their juices to the mix. Onions, cucumbers and basil are often a part of the mix, as they are in this recipe.

I used cherry tomatoes here, and halved them but if you have some big ripe tomatoes to cube up and use instead, definitely do that. Mixing different colored tomatoes gives this dish even more gorgeousness.

I love it very much. It’s best the day it’s made, but after it sits for at least 20 minutes. If you have stale bread, and want to use it instead of making croutons, then you are really making classic panzanella. I love these croutons which are made with either garlic oil (if you have time to make it or have it on hand), or plain old olive oil.

This dish feels like an ode to summer. A Tuscan salad, created to use up stale bread,  dressed with  vinaigrette, and mixed with juicy tomatoes ,onions, cucumbers and basil.

What Type of Bread to Use for Croutons

Short answer: you can use any bread you like for croutons. Most of the time it’s some sort of white bread that is used, but as long as it’s a firm bread you can play around with everything from Italian bread to ciabatta to a Pullman loaf. However, there are no rules about this, and croutons can be made from all kinds of breads, like sourdough, pumpernickel, or whole grain.

Do I Need to Remove the Crust of the Bread for Croutons?

Up to you! I happen to love the crust of the bread, and like the difference in texture between the softer inside of the bread and the crunchier crust. If you prefer to cut off the crusts, go for it, but since the whole point of panzenella originally was to use up stale bread it seems a shame to throw away any part of the loaf.

I want to try this sometime with these Parmesan Croutons – I think that would be something pretty amazing, a whole other level of panzanella.

What to Serve with Tomato Panzanella: 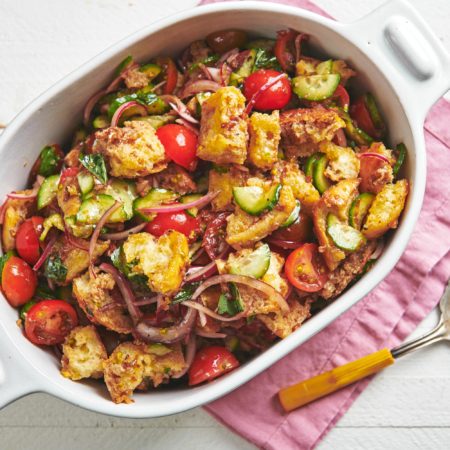 For the Ciabatta Croutons