How to Cook with Rosemary 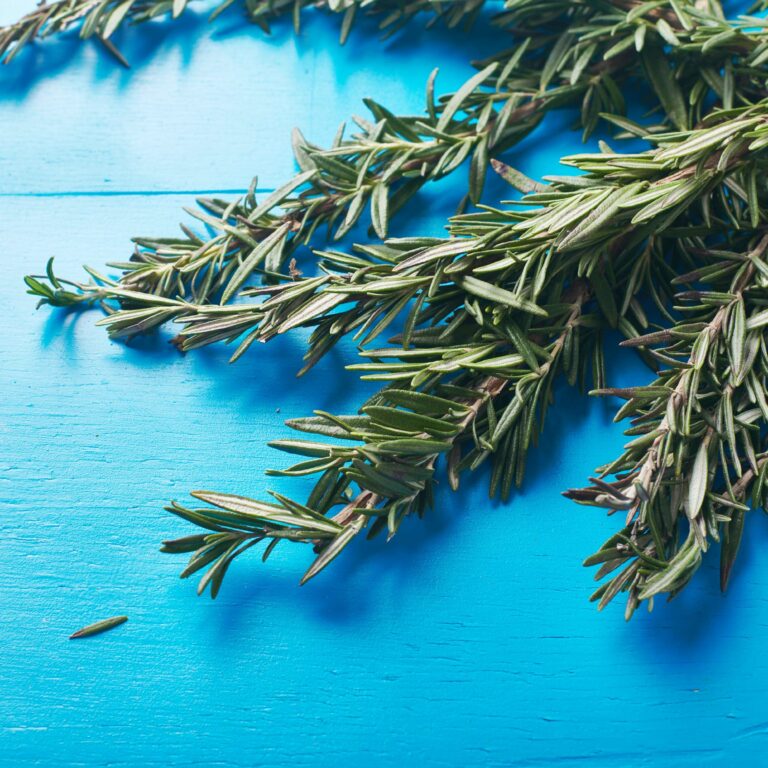 Rosemary is woody perennial herb that has extremely fragrant needle-like leaves and colorful flowers. Native to the Mediterranean, rosemary did some hopping around (Egypt, China, Britain) before finding its way to America. It actually is part of the mint family and in many cultures, rosemary signifies remembrance and is thrown on graves and coffins, and used in war commemorations.

It is very easy to grow and extremely fragrant so is a common herb in people’s gardens, also used as ornamental plants and can be pruned into formal shapes.

Rosemary has stiff, green, needlelike leaves attached to a woodsy branch. While easy to identify from its unique look, once you know the smell of rosemary, you can tell a rosemary plant from many feet away.

Rosemary is one of the most aromatic of the herbs and has an equally pungent taste. The flavor is lemony-pine-like and has also been described as minty, sage-like and peppery.  Because of its strong flavor, start with small amounts as a little goes a long way.

Dried rosemary can be substituted for fresh in many recipes, especially any recipes that are cooked. Use 1 teaspoon of dried rosemary for 1 tablespoon fresh, so a 1:3 ratio of dried to fresh rosemary.  For recipes and dishes that call for fresh rosemary that not are cooked, sometimes it’s ok to sub in dried, sometimes not.  Dried rosemary is pretty woody so you want to make sure it has time to soften and blend into the dishes; not so great for salad dressings, for instance, but fine for marinades.

Substituting Other Herbs for Rosemary

Rosemary is a very distinctive herb, and one whose flavor is hard to substitute with another herb.  So if making a dish that calls for rosemary and you don’t have any…just know the flavor profile will be different with a substitute.  It can be just as delicious, but different.

Having said that, thyme and savory often compliment the same ingredients as rosemary does. Sage can work well in meat, egg dishes, and poultry seasoning, and marjoram also can work as it has some hints of pine flavor. Mint is another possibility.

Where To Find Rosemary?

Fresh rosemary can be found in the fresh produce section of supermarkets, particularly in the spring and autumn months. Often it is available in small plastic packages along with other fresh herbs. During peak season, you often can find fresh big bunches of rosemary at farmers markets. Dried rosemary is found in the baking aisle with the other dried herbs and spices.

How to Choose Fresh Rosemary

Fresh rosemary may be sold in bunches (particularly at farmers’ markets) or in small plastic containers.  See below for how to store it once you bring it home.  Avoid bunches with browned or falling-off leaves or leaves that look shriveled, dried or damp.

You can buy rosemary in fresh or dried forms. Sometimes recipes call for rosemary sprigs.  This simply means to throw a whole “branch” of fresh rosemary in the stew, soup or on the roast. Flavor will get infused through slow cooking and then you can throw out the sprig before serving.

Most often, rosemary is either called for as whole leaves (which you simply pluck off the sprig), or minced. Any which way, rosemary is very hearty and can be added at the beginning of cooking as it stand up to long cooking times. Rosemary is a bold flavor which becomes stronger over cooking time so plan accordingly.

What to Do with Lots of Rosemary

You can use rosemary sprigs as skewers and make kabobs for the grill or the oven. You can also infuse olive oil with fresh rosemary. Place about 1/4 cup fresh rosemary in a small non-reactive pot with 1 cup of olive oil. Heat over low heat for 10 minutes, not allowing the oil to come to a simmer. Remove from the heat and let cool to room temperature. Let the rosemary steep in the oil for an hour or two, then strain out and discard the rosemary. Pour the rosemary infused oil into a clean dry sealable jar and store in the fridge for up to 10 days.

How to Store Rosemary

Fresh rosemary will last for approximately 3 weeks if you wrap it in a slightly damp paper towel and then place the bundle in a sealable plastic bag or container.  Place it in the crisper drawer for even better storage conditions (less cold than the back of the fridge).

How to Freeze Fresh Rosemary

Cut sprigs into 1 or two inch pieces and place them on baking sheet. Freeze for a couple of hours until solid, then transfer the rosemary to a freeer proof zip-top bag. Press out the excess air and freeze for up to 6 months.

How to Cook with Other Fresh Herbs:

Here are some recipes that use fresh rosemary: 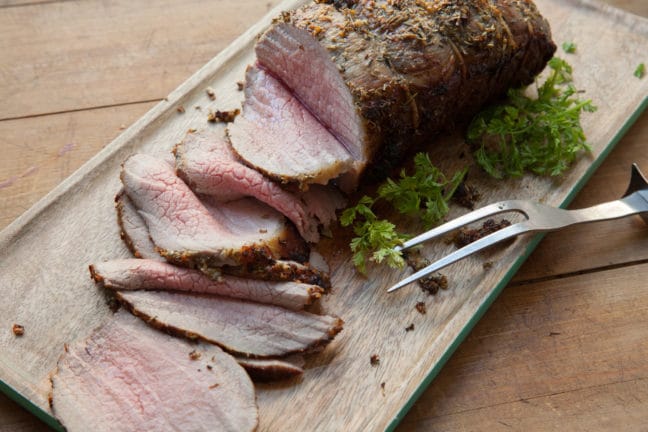 Eye of Round Roast

This incredibly simple and economical roast eye of round beef recipe with thyme and rosemary has a terrific flavorful crust, and tender, pink, juicy meat inside.
Get the Recipe

Roasted Broccoflower and Shiitake Mushrooms with Rosemary and Garlic

An unusual but truly easy side dish. with with a simple little final drizzle of maple syrup, lemon juice and vinegar.
Get the Recipe 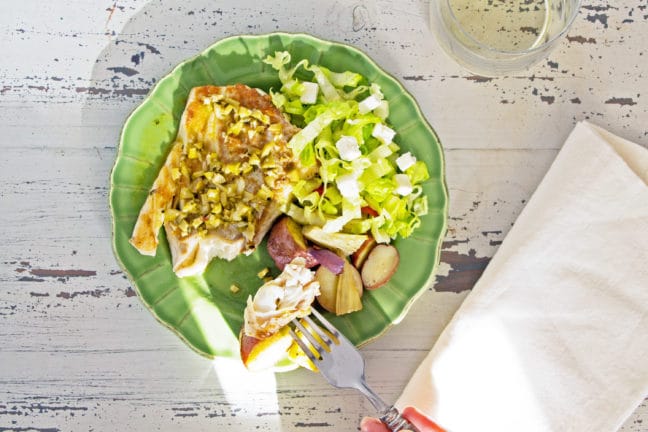 This easy fish dish comes together in about 25 minutes, with a great medley of Mediterranean flavors.
Get the Recipe 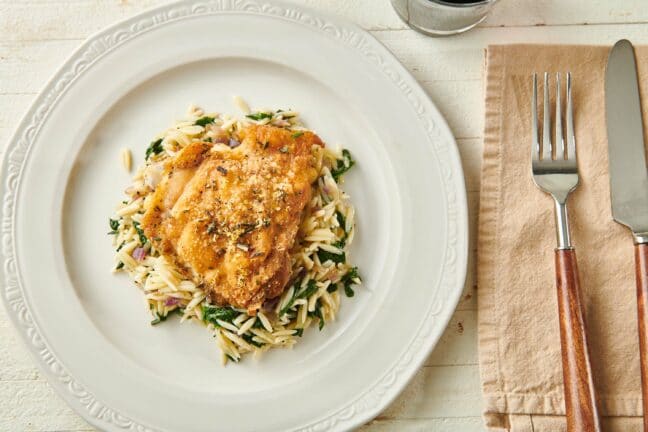 Rosemary and lemon are excellent partners for these chicken thighs which cook up extra crispy, like a cross between fried and roasted chicken.
Get the Recipe 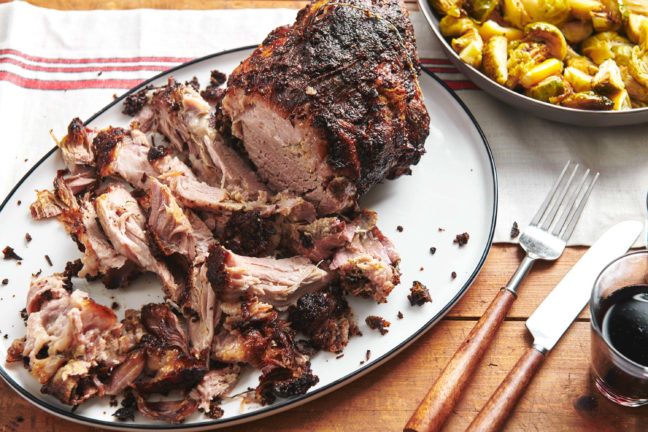 A super tender slow cooked marinated pork shoulder or butt roast recipe that is amazing on its own, and also can be used in so many ways. One of my go-to dishes for casual crowd entertaining.
Get the Recipe 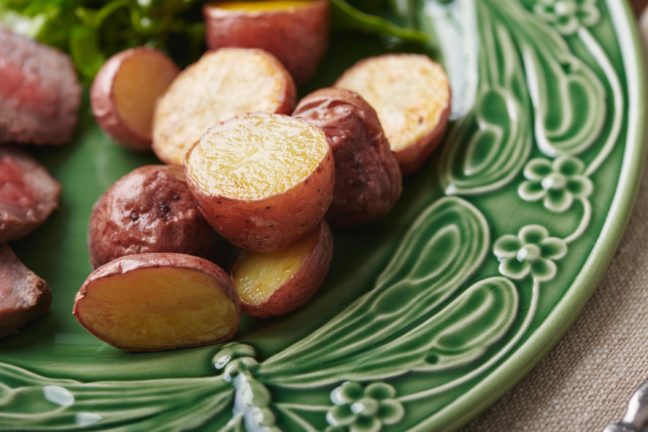 How to Make Roasted Potatoes

Roasted potatoes go with just about anything, and couldn't be easier to make.
Get the Recipe