In a hot oven with just a handful of seasonings, a simple wedge of cabbage turns into something magical. 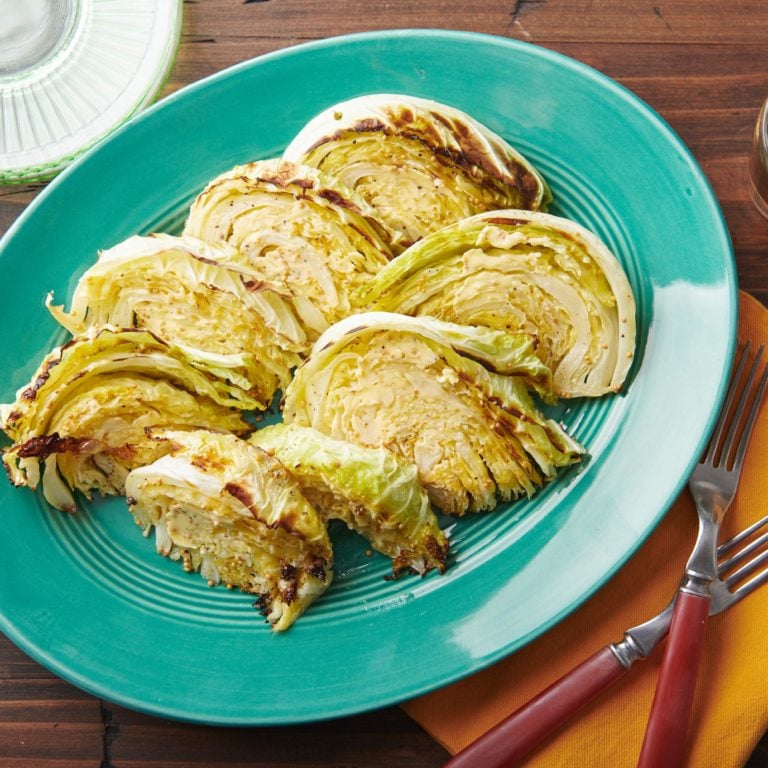 I have been a cabbage fan for a long, long time.  What’s not to like?  It’s cheap, it’s plentiful, it last forever, it’s there on the winter when the variety of fresh vegetables is at a nadar, and it is completely and totally versatile.  And now here’s a sentence that might come as a surprise: Cabbage is kind of hot.

It’s short sentence, and while it may not make the world shift on its axis, it’s interesting that cabbage, that taken-for-granted vegetable, that sturdy dense produce, that food of many countries’ history (and poor people’s diets) has been slowly becoming more appreciated.  The long time Rodney Dangerfield of vegetables, cabbage is finally getting the respect its due.

A Super Short History of Cabbage

It’s ridiculous to talk about cabbage’s current popularity without digging in a bit about from whence it cameth.  Cabbage was most likely domesticated in Europe over 3000 years ago.  It made its appearance on the tables of ancient civilizations such as the Greeks, Romans and Egyptians, but it has figured more prominently in more recent centuries.

Cabbage has been a part of most of the world’s cooking history.  Most famously, in Ireland cabbage was one of the only sources of sustenance in a potato famine-ravaged country in the mid 19th century.  And yes, one of the strongest cabbage associations is with the classic Irish dish Corned Beef and Cabbage, not to mention Colcannon.

Cabbage Recipes Around the World

Sauteed with bean curd: China.  Cooked with potatoes and other vegetables in Bubble and Squeak: England.  Surkal, a hot and sour cabbage dish from Norway.  Copious amounts of fermented and pickled cabbage dishes (including Kimchi in Korea, and sauerkraut in Poland, Germany, Alsace other Middle European countries and regions).  Stuffed cabbage rolls in just about every cuisine you can imagine: called golabki in Poland, holishkes in Jewish cooking, sarma in Croatia, ロールキャベツ in Japan.  And let’s not forget coleslaw in the U.S.A.

That is a ridiculously truncated and exclusionary history of cabbage. But, the point is: throughout history cabbage was valued for its plenteousness, its cheapness, its long shelf life, its ability to be preserved for an even longer shelf life.  It can be cooked in pretty much any way a vegetable can be cooked. Cabbage can be sautéed, steamed, brained, roasted, stewed, and made into soups, not to mention used raw and preserved in a variety of ways.

Robert Schueller, the “Produce Guru” at Melissa’s Produce, a specialty produce company out of Los Angeles, has had his finger on the pulse of all produce trends for decades.  He definitely identifies chefs and restaurants as the drivers behind the cabbage movement.  He sees it used in everything from a topping for tacos, to as a base or nest for various menu items, such as marinated fish dishes.  Schueller says that chefs like how it maintains a crisper texture than other greens on other warm preparations.

“We have seen a rise in Napa Cabbage, too, which is used in Asian stir fries, fermentation and pickling, all of which are gaining in popularity.  The most interesting thing is that the rise of Napa is not just in Asian groceries and restaurants,” Schueller says.

Low in fat, high in fiber, and with only 33 calories a cup, cabbage is a pretty fine good-for-you vegetable. It has a lot of vitamin C and beta carotene, as well as other antioxidants.

How to Make Roasted Cabbage Wedges

This recipe is super simple, but it rocked my world.  It’s was inspired by a recipe in Paul Kahan’s recent cookbook Cooking for Good Times.  Paul used caraway and poppy seeds in his version, and broils it.  I chose mustard seeds instead, and roasted it at a very high temp. The wedges soften, and the edges get crispy and caramelized.

Cut the cabbage into thick wedges, and brush with some olive oil.

Give a sprinkle of salt and mustard seeds. Then a quick smear of softened butter before they go into the oven.

Into the hot oven for about 15 minutes.  Out . when they are just starting to become tender and some of the outer edges have that appealing caramelized brown color.  I would love to try these sometime in a wood burning oven.

Finally a squeeze of fresh lemon juice to finish them off.  These make an amazing side side for all kinds of main courses, but the truth is that I ate this whole wedged head of cabbage in two sittings.  With no main dish in sight.  I have eaten more embarrassing things in two sittings.

What to Serve with Charred Cabbage: 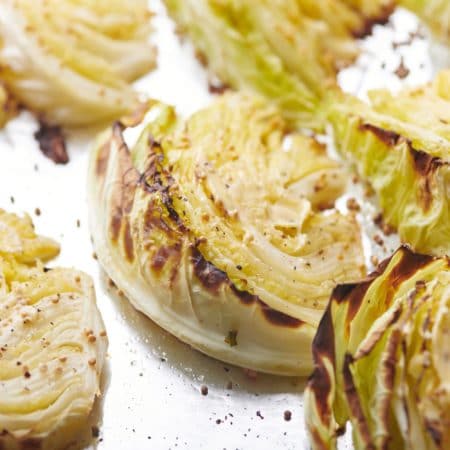