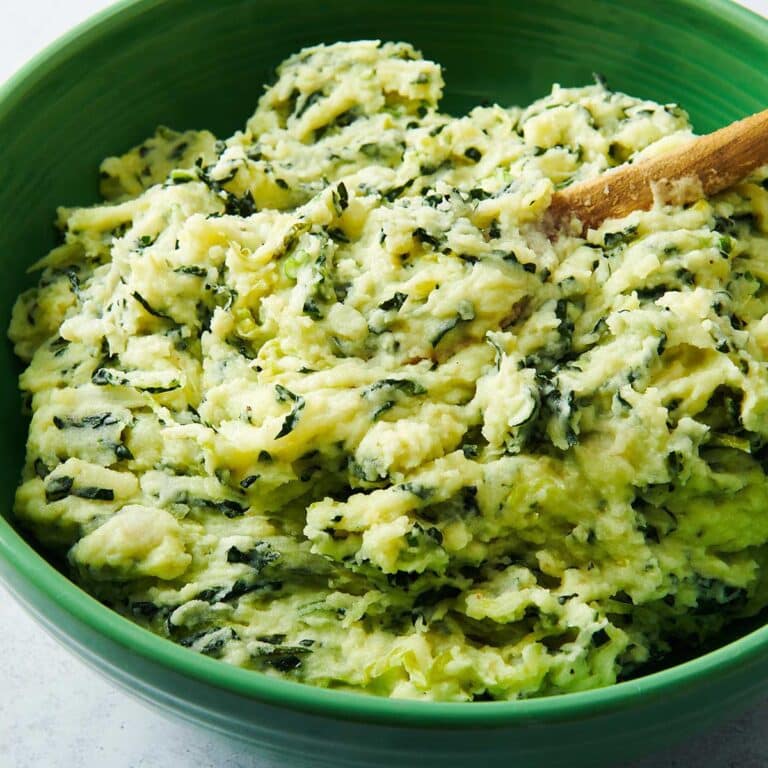 Colcannon is delicious mix up of potatoes, kale and cabbage, one of the most classic dishes of Ireland.  It is served as a side dish, often on St. Patrick’s Day. but I think it’s delicious and hearty enough to be the main part of the meal, any time of the year!

Over 31 million Americans claim some Irish ancestry, and while St. Patrick’s Day is a celebrated holiday in Ireland, it’s actually celebrated on a larger scale in the U.S.  The day celebrates St. Patrick, the patron saint of Ireland, who lives and died in the 5th century.  The holiday has an inclusive feel about it, a sense that you don’t need to be Irish to celebrate.  In fact, the holiday has been embraced as a moment to be heritage-proud, and there is a popular saying “everyone’s a little Irish on St. Patty’s Day.”

And of course, when there is a cultural/national holiday there are always the foods that go with.  Some of the favorites are corned beef and cabbage, Irish soda bread, shepherd’s pie, and lamb stews.  And there is colcannon.

This classic Irish medley of potatoes and greens is delicious but definitely harkens back to poor times in Ireland.  The potato blight in the mid-nineteenth century devastated the country causing years of famine that resulted in Ireland’s population decreasing by half by the beginning of the 19th century.

Potatoes were and remain one of the central foods of Irish cooking. This dish celebrates the humble tuber with the addition of milk and cream, as well as whatever green vegetables and member of the onion family are available.

According to a 1952 Irish cookbook called Feasting Galore written by Maura Laverty: “A heaped portion is served on each plate.  A well is made in the center of the heap to hold a generous lump of butter.  The colcannon is eaten from around the outside of the heap, each person dipping his fork first into the colcannon and then into the melting butter.  The perfect companion to a class of colcannon is a glass of fresh buttermilk.”

There are a whole lot of recipes for colcannon, and a whole lot of opinions of the right way to make it.  The potatoes are non-negotiable, though what they are mashed with (milk, cream, butter, scallions, onions) is up for discussion.

But it‘s the greens that are the big cause for discussion.  Many recipes call for cabbage, which makes sense. Other than potatoes, cabbage was one of the foods that sustained the Irish people for many years.  Some recipes (even some very old ones) call for kale or other greens.  I have made it with both cabbage and kale, and frankly I don’t know which I like better . So I made a version with a combination!

The point, of course, is that in Ireland they would have made this dish with whatever was available at the time, in the region. And so we can use whatever greens make sense for our colcannon on St. Patrick’s Day (or any other day some classic Irish comfort food is warranted.)

And according to this charming old cookbook, “in the Midlands colcannon is called “Thump” and in the North and West it is called “Champ.”  Champ might be made with only spring onions or scallions as the greens, with no cabbage.

What Do You Eat Colcannon with? 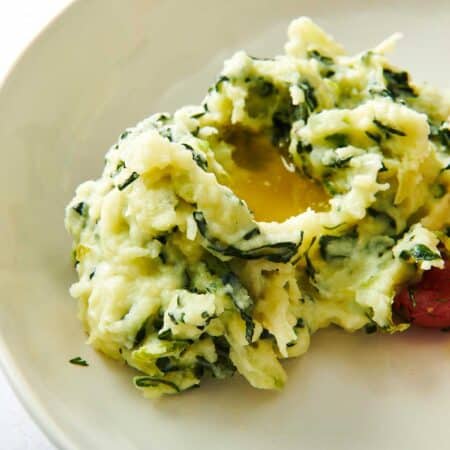 If you don’t feel like use of the creamier items here, or you don’t have them in the house, just add another ½ cup of whole milk and call it a day.