This Pear Tart Tatin dessert looks fancy and difficult, but you can pull it off easily with the shortcut of premade puff pastry. 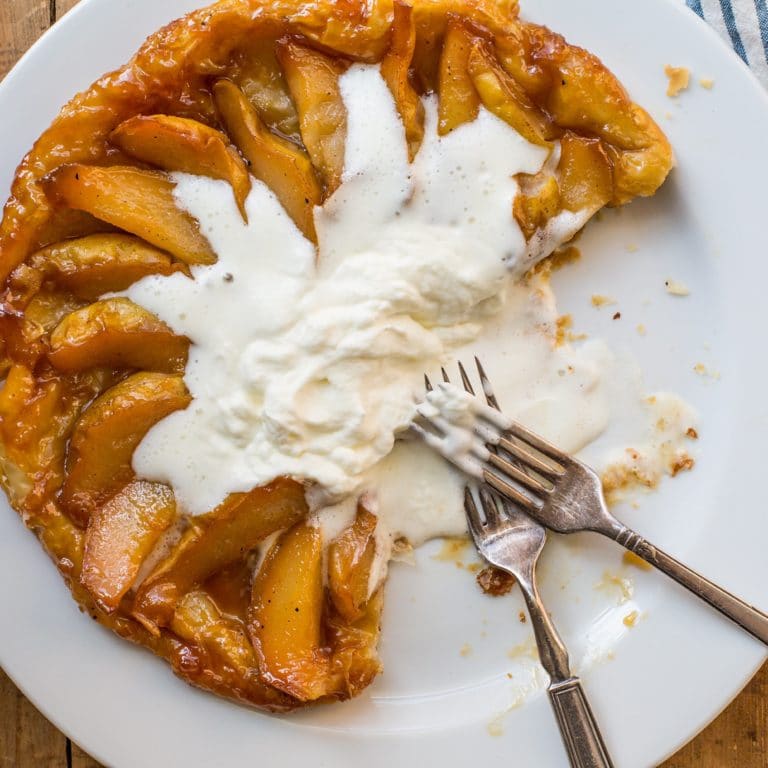 A beautiful dessert that finishes off any fall, winter or holiday meal with a bang. Sweet caramelized pears perched atop a puff pastry crust. And with store-bought puff pastry, it’s so much easier to make than you might think!

Like most people, I thought tart tatins sounded just plain scary. Flipping a pan over so that the fruit ends up on top, and the crust ends up on the bottom! Such drama! Why would anyone put themselves through such angst?

But then suddenly it was pear season, and the voluptuous, colorful, squatty fruits were everywhere. I bought some puff pastry, gave myself a big old pep talk, and turned up the music.

An hour later, my first pear tart tatin was a success. A few pears stuck to the pan when I inverted it, but I pulled them off and settled them back into place on the tart and no one was the wiser. (I’ll admit to being happy, however, to be flipping my first tart in the privacy of my kitchen, and not in front of a crowd.). After a few tart tatins, you’ll be wondering why you were ever intimidated by them in the first place!

And the caramel is easy, as well. In a skillet, preferably cast iron, stir together the sugar with 2 tablespoons of water. Cook over medium heat, without stirring, until the mixture starts to turn golden about 6 minutes. Stir in the butter, and continue stirring occasionally until the mixture is a rich golden color. Stir in the lemon juice.

This Pear Tart Tatin dessert looks fancy and difficult, but you can pull it off easily with the shortcut of premade puff pastry.

You want your pears to be just ripe, but not soft. They need to hold their shape in the baking. Try Anjou, Bosc or Bartlett pears.

What to Serve with Pear Tart Tatin

Buy yourself some vanilla good ice cream for this—you and your tart tatin deserve it. Or make homemade sweetened whipped cream to dollop on top.

And in closing, and once again, I will take a moment to profess my deep abiding love for premade puff pastry. I may be excited to add tart tatins to my repertoire, but I’m pretty far away from wanting to make my own puff pastry.

Other Great Fruit Desserts to Try:

And check out How to Cook Pears. 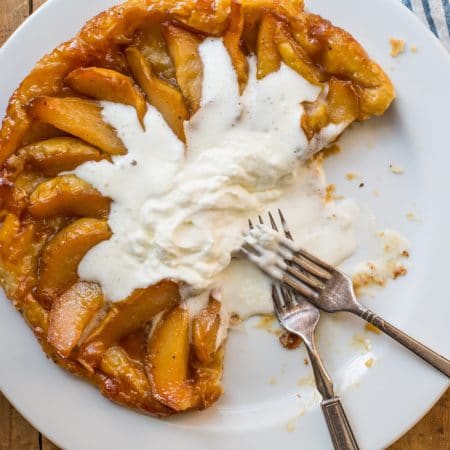