How to Make Perfect Whipped Cream

All the secrets to how to make perfect homemade whipped cream every time. Your desserts will never be the same! 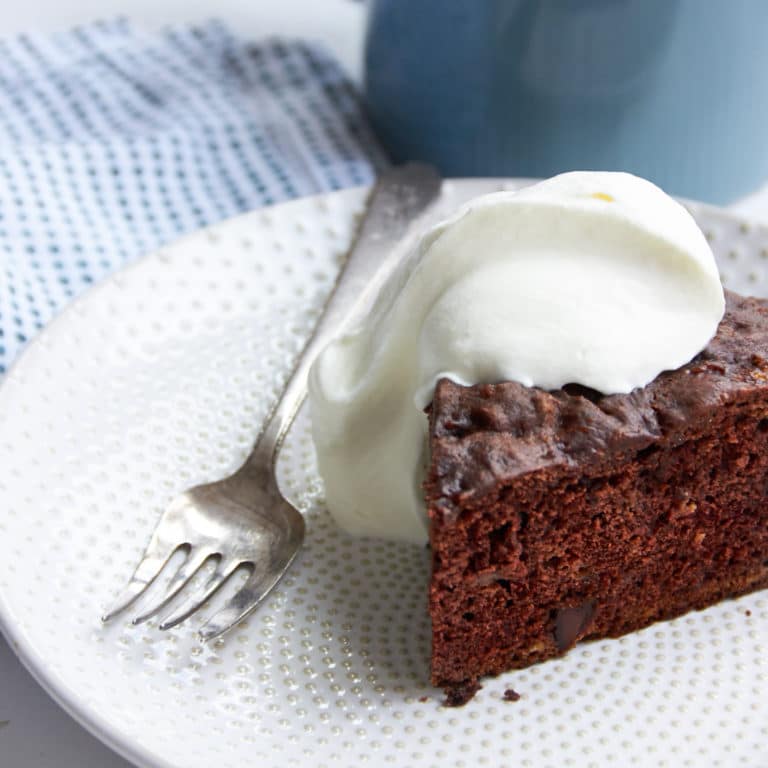 If the idea of homemade whipped cream makes you happy—but also intimidated—please do read on. In about 5 minutes you will be ready to turn a carton of heavy cream into a voluminous, billowy sweet topping for anything your heart desires.

Say you’ve made some gingerbread or brownies or a tart or a chocolate banana cake and you want to bring it to the next level – to the fancy dessert level. To the company-is-coming-but-I’m-do-not-have-the-time-and/or-energy-to-make-a-cake-with-frosting level. All you need to do is top it with a dollop of whipped cream. (And in the right cases, a few fresh berries on top are also a super nice touch.)

If your dessert is warm, the whipped cream will start to melt invitingly over it – a thing of beauty. (Oh, that dish above? Fudgy Chocolate Cake. It’s just as good as it looks.)

A bowl of fresh sliced peaches or nectarines or lush berries also becomes a proper dessert with a sploosh of whipped cream.  No cooking whatsoever.  Or buy a poundcake, or some little tarts or maybe a strawberry shortcake at the bakery.  And it’s hard to imagine a proper ice cream sundae without a dollop and a cherry on top.  It’s a funny thing but if you make homemade whipped cream, people tend to not even notice that you didn’t make what’s under it.

How to Make Homemade Whipped Cream:

You are simply going to combine cream, confectioners sugar and a bit of pure vanilla in a bowl, and then blend it.  You can use a hand mixer or a stand mixer with a whisk attachment, which is the easiest way to do it, or a regular hand-held whisk if you want a nice little forearm and wrist workout.

One way to make whipping cream go faster and easier is to make sure the cream, the bowl and the whisk or beaters are very cold before you start whipping the cream.  The cream should be well chilled in the fridge.  The bowl and beaters or whisk can be put into the freezer for 20 minutes or more before you begin.  This will move things along quickly!

And don’t try to make too much whipped cream at once. See below for guidelines on how much cream to whip in one batch.

All the secrets to how to make perfect homemade whipped cream every time. Your desserts will never be the same!

Making Whipped Cream with an Electric Mixer or a Stand Mixer with a Whisk Attachment:

Definitely the easier way to go!  Make sure your bowl is big enough because once the mixer starts going the cream can splatter a bit, and when it is whipped it will more than double in volume.  I  would say that in a big bowl you could whip up to 4 cups of cream with an electric mixer.  More than that might not whip up properly, since you have to get enough air into it to form peaks and a large volume of liquid will work against you.  If you need more whipped cream you’ll want to then switch to making it in batches.

Making Whipped Cream by Hand with a Whisk:

This method is actually very satisfying, and as long as you are not making a large quantity, two cups or less of cream, it’s easily achievable, with a few breaks.  Don’t try to whip more than two cups of cream at one time by hand – it will take forever, and you might not be able to get enough air into the cream using a whisk.  Make sure your cream is very cold before you begin!

How to Sweeten Whipped Cream:

Confectioners’ sugar, or powdered sugar, is the most traditional way to sweeten whipped cream, as the sugar is very finely powdered so dissolves quickly, leaving a creamy texture.  Vanilla adds depth of flavor.  If you ever want a more purely white whipped cream, you can skip the vanilla, and therefore your whipped cream won’t turn a very slightly ivory color. Do not use anything but pure vanilla, though – imitation vanilla extract is just not good product.

If a recipe says to whip cream until it forms soft peaks it means that you will want to whip the cream until it it firm enough that when you lift out the whisk or beaters the peak of cream droops over slightly where you lifted your beating implement.

If a recipe says to whip cream until it forms firm peaks it means that you will want to whip the cream until it it firm enough that when you lift out the whisk or beaters the peak of cream stand up in a point where you lifted your beating implement.  Below is firm peaks.

What to Do if Your Whipped Cream Separates or Breaks Down?

If you beat the cream a bit past stiff peaks, and it starts to turn into butter, just add another 2 tablespoons chilled heavy cream and beat quickly until incorporated and smooth, stopping right at the moment of stiff peaks this time!

What to Serve with Homemade Whipped Cream: 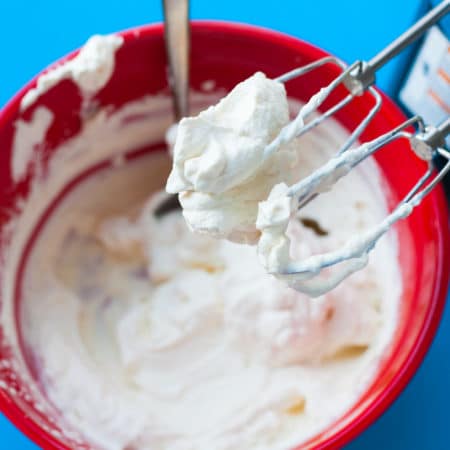 How to Make Perfect Whipped Cream

All the secrets to how to make perfect homemade whipped cream every time. Your desserts will never be the same!
Yield: 8 People
Diet: Gluten Free, Vegetarian