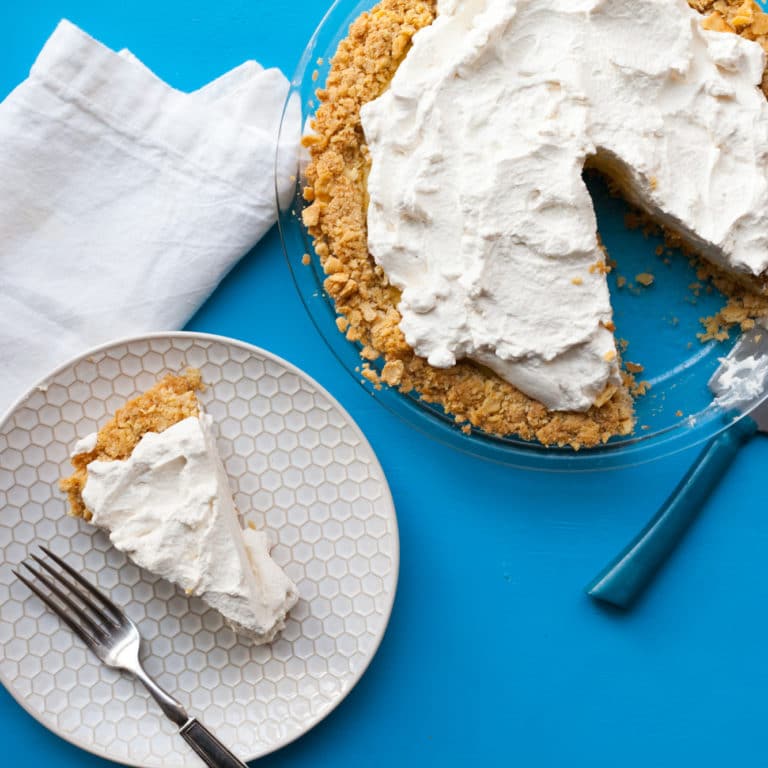 How often does anyone get to say that?

This Atlantic Beach Pie recipe comes from Bill Smith, long-time chef of Crook’s Corner restaurant in Chapel Hill, North Carolina.  It’s his version of a pie that was commonly served at seafood restaurants on the North Carolina coast when he was growing up.

He had just put it in the menu, not even as a permanent offering, I think.  When I first tasted the Atlantic Beach Pie, all I could say was, “OH MY GOD, OH MY GOD.”  I went into a pie-induced fugue state of some kind.

I have a very patchy memory of finishing the pie, sharing it with my dinner companion, forks gentile-ly nudging each other for the final bites.

The beauty of this pie lies in the play between the salty, dense crust made from saltines, and the creamy sweet-and-tart filling featuring citrus juice.  The billows of whipped cream don’t hurt.

Just after my trip to Chapel Hill, NPR asked me if I wanted to do some segments on a series of shows they were creating called Found Recipes.  In essence the show is about a person (in this case me) coming across kind of food or recipe that delicious/amazing/surprising – that weren’t looking for at all.  A happenstance serendipitous discovery that needs to be shared with a greater world.

Yes, I said.  I would love to be on your show.  And I have the perfect recipe.

The segment aired and the response was crazy enthusiastic.  The phone started ringing at Crook’s Corner people making reservations and checking to make sure the pie was on the menu.  It had been, in fact, a sometime special, not a permanent menu item…..but Bill quickly realized that that pie needed to stay on the menu for good.

Crook’s Corner is about to celebrate their 50th anniversary, and the created a timeline of milestones for the restaurant, the NPR piece about the pie made the chart!   I was very proud.

And then just now Margaux Laskey told the whole story in the New York Times!

Says Margaux: “It was huge hit at the Southern Foodways dinner, so he added it to the Crook’s Corner menu. Katie Workman, the author of ‘The Mom 100 Cookbook: 100 Recipes Every Mom Needs in Her Back Pocket,’ discovered it while eating there and went on to share the recipe on National Public Radio’s Found Recipes series.

“And that was that. Soon, Crook’s Corner had a line out the door, and the pie was selling out. Magazines and newspapers wrote features about it. Food bloggers sang its praises. (A quick internet search for the pie yields about 458,000 results.) Every cooking website worth their flaky sea salt added it to their recipes. Jeni’s Splendid Ice Creams even developed an Atlantic Beach Pie flavor.”

IS THAT EXCITING OR WHAT????

This pie came about because, as Bill explained, that back in the day there was a commonly held belief (which his mother still holds to this day) that if you ate sweets after a seafood meal you would get sick. His aunt even went so far as to test this theory by driving to a Dairy Queen after such a meal, and having a milkshake, and nothing actually happened.

Bill’s mom still holds staunchly to this belief however. The exception was apparently this citrus pie, which was the only dessert served at many of these coastal seafood joints. The saltine crust is sheer genius.  It was often served with meringue on top (no doubt using the white from the yolks that are used in the filling), but Bill prefers it with whipped cream, and I am not about to argue.

It’s a good story, but it’s an even better pie.

If you want to hear the NPR piece, just click here! It has since been featured — oh everywhere. Southern Living (where it is the cover recipe for their July 2021 issue, bulled as “the easiest pie in the world!) 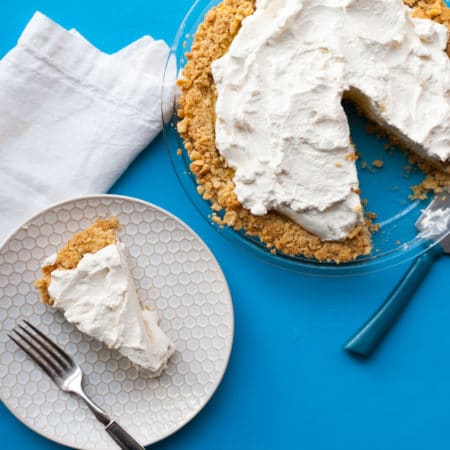