A notch above plain roasted asparagus, but not a whole lot more effort. 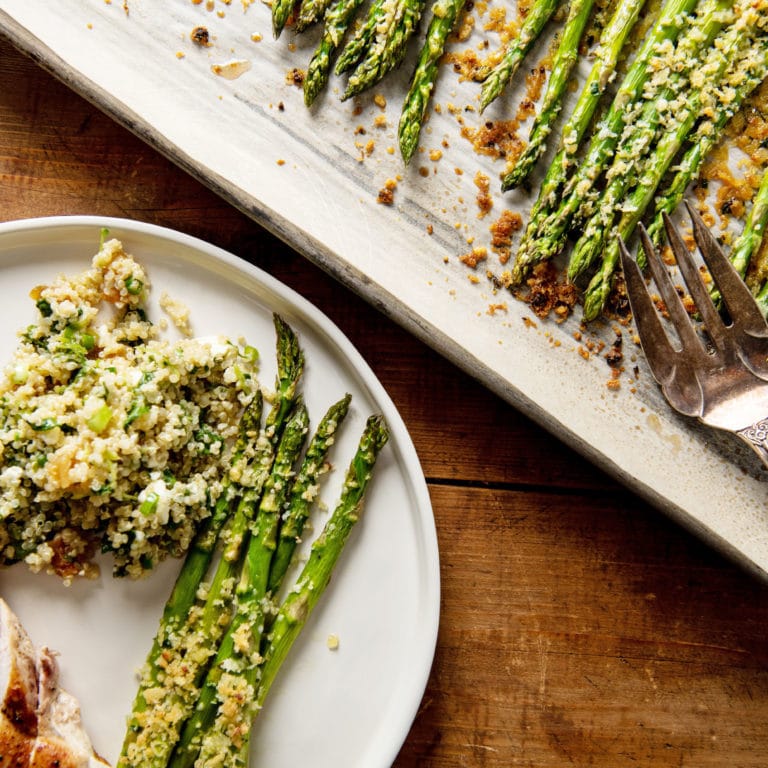 When Gary and I were first dating/living together (the difference between the two is a pretty small margin.   We were young and apparently quite carefree) he told me he really liked asparagus, but hasn’t eaten that much of it. It was not a Freilich household vegetable, but once he discovered it as a young adult he realized what had been missing.

So our first spring together I made it. A lot. And then at some point he mentioned that while he did in fact like asparagus, he didn’t necessarily want to eat it as every meal. My memory is hazy as to whether or not I took offense, but I do remember him saying it, so clearly the moment stuck with me.

I now regulate my asparagus output to what I think is a reasonable and universally acceptable pace. And unlike some vegetables, which I will prepare all year round (broccoli or spinach, for instance) , asparagus is pretty much confined to the spring months, when it is really truly in season.

It makes it feel more special, and of course it is the only way to attempt any effort on local eating. Which by the way is at the same time both a good thing, and can also get kind of annoying when you get super militant about it.

A few extra minutes gets you a simple cheesy, crunchy topping that turns asparagus into a very special side dish.

This version is just a notch more effort than simply roasting asparagus, but has a lot of flair. It would be great with Salmon with Tarragon Vinaigrette, Filet Mignon with Pistou and Green Salad, or Herbed Boneless Leg of Lamb with Mustard Crust.

If you want to double this go right ahead, but if you want to triple it make sure to use two baking sheets and divide the asparagus and bread crumbs between them. You need the asparagus to stay in a single layer to cook evenly and for the breadcrumb layer to do its thing. Rotate them halfway through cooking so that each sheet has its chance to be on top and brown up nicely.

If You Like Asparagus at Least as Much as Gary Does: 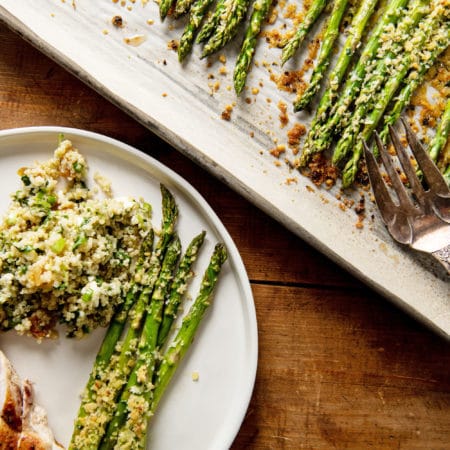