The first thing I make after every apple picking expedition. 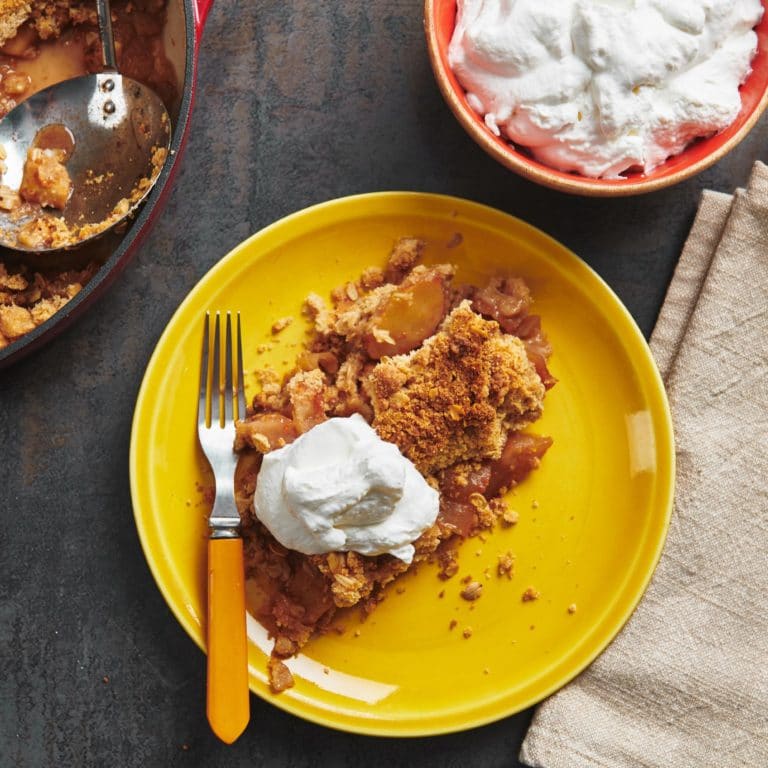 Streusel lovers, this one’s for you.

This apple crisp has a thick layer of topping.  This is a bit of an understatement.  There is lots of topping.    A deep, dense, non-apologetic layer of sweet oat-laced topping.  We all know that’s the best part of the crisp, so let’s get in there.  Look at that blanket of crunchy sweet loveliness.

Which Apples to Use for Baking

Some people have very firm opinions (slight pun, slightly intended – stay with me) about which apples to use in pies, crisps, and other baked goods.  I don’t.  I definitely like to use a mixture when possible to give every bite a slightly different twist, and I like to use some apples that are more tart than not, mixed with a smaller amount of a sweeter variety.  I like a bit of citrus for brightness, and a bit of cinnamon  (not too much, we want to taste those apples).

Use any apples that are firm (there’s the pun) so they will stand up to baking and have a nice texture.   Jonagolds (sometimes called Jonathans), Braeburns, Honeycrisps, Mitsu, Cortlands, Winesap, Pink Lady, Empire, Granny Smith and all manner of green apples.

If you have the opportunity to go apple picking in the fall, just make it happen.  Some of my fondest childhood memories are of those apple picking days—well, not the time I fell out of a tree when I was five and my family thought I was just being a little bit dramatic, so left me in the backseat of the car while they picked apples, and then when I was really quiet for a while drove me to the doctor to find out I had a broken leg.

Other than that one slightly blurred memory I have always really loved apple picking.

A thick layer of streusel topping goes on top of our Favorite Apple Crisp. Use a mixture of apples to give every bite a different twist.

Anyway, when you do go apple picking, you will probably pick several varieties of apples and then when you get home, become unable to remember which is which type.  That’s ok.  Any apple that tastes good is good for eating, and any apple that is very firm is good for cooking.  At least that’s my basic rule of thumb.

Want a slightly different version?  With a slightly more modest amount of streusel? I’m of the mind that almost all apple crisps are good apple crisps.

Oh, and if you’re going to hit that streusel hard, you’re probably also going to hit the whipped cream (or ice cream) hard.  In for a penny, in for a pound. 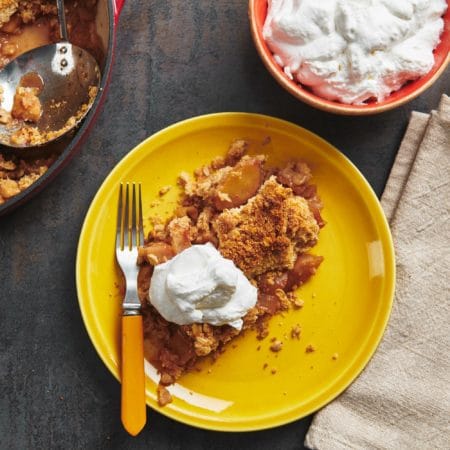 For the Crisp Topping

In a mixing bowl, using a whisk or a hand mixer, combine the cream and confectioners’ sugar just until slightly firm peaks are formed. This will keep for up to 4 days in the refrigerator.