Kind of like a rough and ready scalloped potato dish in a cast iron pot. 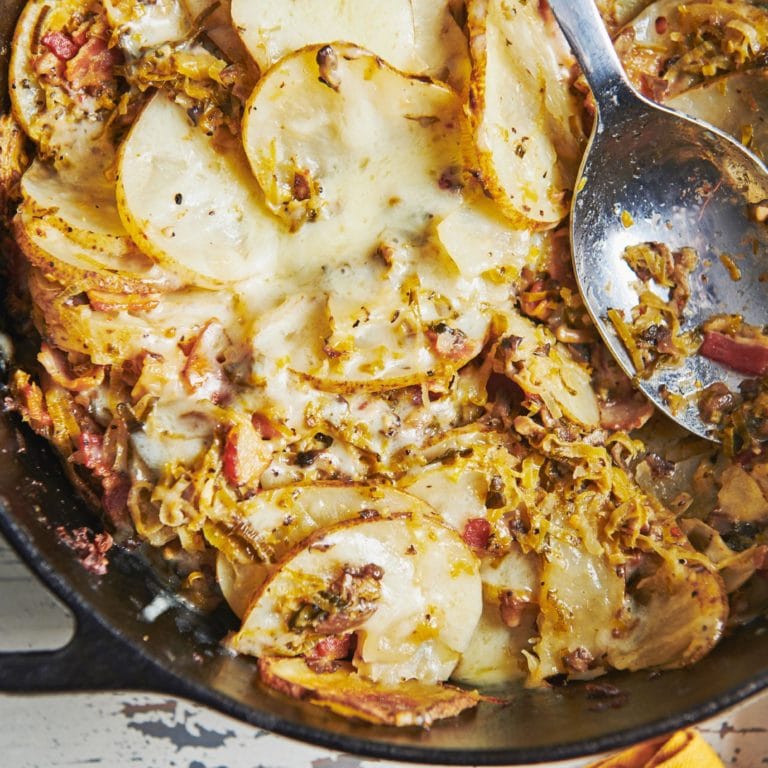 Last fall I accepted an invitation to fly out to Idaho and see just what went down during potato harvesting season in Idaho. If you invite me to see something grown, made, or harvested, I will move small mountains to see that. I love getting that extra step back into the how it happens, that behind the scenes peek.

We did a whole bunch of potato related things (dehydrated potato plant, potato shipper center which was built right next to the train line that ferries all of those potatoes to the rest of the country), dinner with potato commissioners. (We also went to Bear World where we got to feed baby bears with bottles, which was truly a life changing moment.  Please don’t miss this if you have the chance.).

The sheer volume! 125 million pounds of potatoes were finishing being loaded and stored in their 30 massive humidity and temperature controlled potato storages—there are thousands of these storages spread throughout the state. These potatoes will be gradually shipped out all over the country and the world over the coming months (412 pounds of Idaho potatoes are sold every second).

Did you know that Idaho produces 13 BILLION pounds of potatoes every year, most of them russets. Billion. With a B.  Idaho grows enough potatoes to fill 500 football stadium 10 feet high with spuds.

How Do You Cook Your Potatoes in Idaho?

I was so overwhelmed with the harvesting process that I almost forgot to ask the question I most wanted to know the answer to: “How do you cook your potatoes?” (Because geez, who wouldn’t want to know that from a potato farmer?)

Brett described this dish, which essentially is one of the state potato dishes in that everyone in Idaho makes it, everyone knows exactly what it is, and it’s hard to imagine a big family gathering or party without it. It also seems to be very popular as a campout dish, since typically it’s made in a cast-iron pot nestled into burning coals. (I assume these camp outs don’t involve long hikes).

One of the best potatoes dishes from potato country, this is like an informal scalloped potato dish with bacon.

What Are Dutch Oven Potatoes?

It’s like an informal scalloped potato dish with bacon, or a rough-and-ready potato gratin. As Brett described it, you start with a cast iron Dutch oven, maybe enamel coated, maybe not.  People who host big gatherings, like the Jensens, often have quite a number of them which they fire up when they are feeding a crowd.

Here’s the upshot: you slice up some potatoes (skin on, please—don’t lost that extra fiber!), chop up some onions, cook up some bacon. These get all layered up with some salt and pepper and garlic powder, and a can of cream of mushroom soup for the liquid. The pot gets nestled into a fire, and hot charcoal briquets are placed all around it, as well as on top of the pot.

Turn the potatoes as you think of it, said Brett, and replace the briquets with hotter ones as needed. Then when the potatoes are tender lift off the lid and sprinkle over a bunch of shredded cheddar. The timing seems to vary a lot, which is reasonable. When you are working with a deep cast iron pot filled with potatoes, and live fire, you just have to wait and see when things are done.

Back home in New York City, I set about recreating this dish. I skipped the canned cream of mushroom soup because I just wanted to kick it up a notch. And I also skipped the campfire because my Super would have been really pissed. I used fresh mushrooms, and a pile of leeks (just because I had them) and also some onions.

Place 1/3 of the potatoes in a Dutch oven or other heavy ovenproof pot with a lid.

Spoon over about 1/3 of the mushroom leek mixture from the skillet.

I’d happily stick with plain old onions and no leeks, when I make it again.  2 to 3 cups of chopped onions would be about right, and the little hit of fresh garlic is nice. And the canned creamed soup is replaced with a bit of white wine and some cream. I hit the bacon pretty hard, but you can do as your conscience dictates.  For cheese, I used a mixture of Gruyere and sharp cheddar, but you can use any shredded cheese you like.

As soon as I lifted the lid and went straight in with a fork I was dazzled. And overwhelmed with a rush of relief that I hadn’t let Brett drive off into the sunset. If you ever need to show someone what the very definition of comfort food is, you would be hard pressed to top this dish.

Use good old Idaho russets to make this dish, which is the potato you probably most associate with Idaho potatoes. Even though Idaho produces 25 different kinds of potatoes, it’s the Burbank russets that you’re likely grabbing when you reach for Idaho potatoes in your market.

What to Serve Dutch Oven Potatoes With: 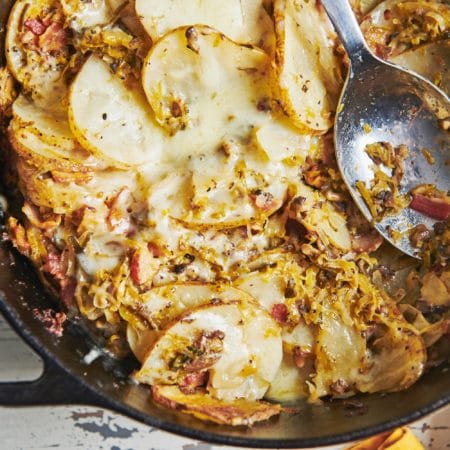