If there is a person in the world who can turn down a slice of ice cream pie, well…I don’t think that person and I would be friends. 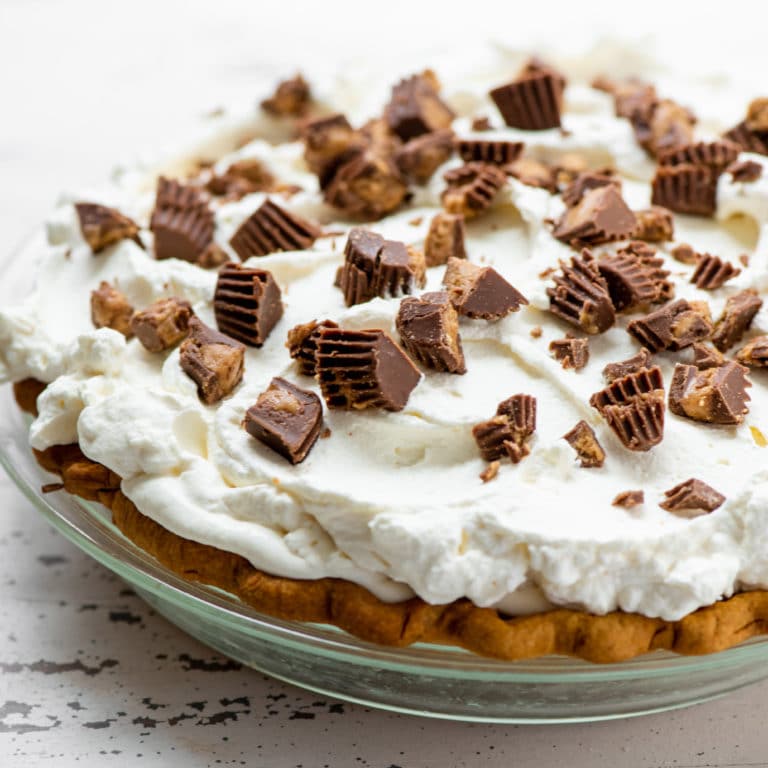 If you want to end a celebration or a gathering with a big old bang, you would be hard pressed to pick a better dessert than an ice cream pie. Somehow ice cream stuffed into a pie crust just seems so much more festive and decadent and sultry than a bowl of ice cream.

And it’s one of the most easy and summer-amazing treats on the planet. Especially this version, with the classic chocolate and vanilla and peanut butter cup thing happening. Not to mention the whipped cream.

Wewalka just introduced a brand new product – their pie crust! Nice and flaky, no lard, thicker than competing pie crusts (so easier to handle, and more of it), and it fits perfectly into a 9-inch pie plate.

The perfect way to celebrate summer. This ice cream pie recipe features a vanilla and chocolate combo and is studded with Reese’s Peanut Butter Cups.

How to Make an Ice Cream Pie

An ice cream pie is more feasible as a two-day project—nothing is hard in the slightest, but as the name suggests, there is some freezing involved.

For an ice cream pie, you need to bake the crust on its own, which is called blind baking. This way it is fully cooked and wonderfully flaky before you start piling in the ice cream. This is a technique used for many kinds of pies, where the filling doesn’t need to be cooked, like a chocolate mousse pie, or all kinds of icebox pies. It’s a great technique to know.

Sometimes a crust is partially baked when the filling only requires a short time, which is known as partial blind baking, but we’ll leave that for the next pie.

Be sure to let the pie crust sit for 15 to 20 minutes at room temperature when you take it out of the fridge, so it will soften and it won’t crack when you unroll it. The crust is fitted into the pie pan, then lined with parchment paper (and surprise, and hooray, the Wewalka crust comes rolled up in its very own parchment paper, so that’s all taken care of).

Into the freezer it goes to firm up. Then it is filled with weights of some sort, for the beginning of the baking process so that it doesn’t shrink and stays flat when it bakes.

A smart thing to do is to save the rice or beans you used to weigh down the crust while it was baking. Place them in a jar and label them “baking beans” or “baking rice” and then you will have them for pretty much forever, and they won’t go to waste (you can’t cook with them once they’ve been in the oven).  And having them ready to go probably means you will make this pie again in the next couple of weeks. It’s just a more likely scenario, and that is very enticing.

Once the crust is cooled, you’ll want to let your ice cream soften slightly before scooping it into the pie crust and smoothing it out.  You can do a single flavor, or you can layer different ice creams, which offers the chance of creating fun flavor combos.  You can also blend chopped candy into the softened ice cream to further gild the lily, and customize your pie.  In this recipe chopped Reese’s Peanut Butter Cups are blended into the vanilla ice cream layer.

Carefully smooth each layer of ice cream over the bottom one so they layers stay distinct.   If you want to make sure your layers are very even and unblended you can place the pie in the freezer for about 30 minutes between each ice cream layer addition, which will allow each layer to firm up before more ice cream is added. If you do this, keep the softened ice cream in the fridge while the pie is freezing between stages.

Finally you can top the pie with whipped cream, homemade or otherwise, and the candies or sprinkles of your choice (in this case MORE Reese’s Peanut Butter Cups.  Because all in, baby.

The pie will keep for 5 days in the freezer.  Cover it well with plastic wrap once the top is firm.   Make the whipped cream just before serving, or a few hours ahead and keep it in the fridge.

You can also slice the pie without with the whipped cream, and serve individual slices with whipped cream added to each piece if you prefer.  You could top the whole thing off with a drizzle of chocolate sauce or caramel sauce if you wanted to throw all caution to the wind. 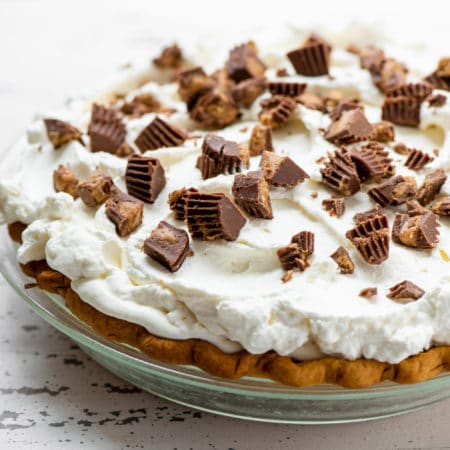 If there is a person in the world who can turn down a slice of ice cream pie, well…I don’t think that person and I would be friends.
Yield: 10 People
Prep Time 2 hours
Cook Time 20 minutes
Total Time 2 hours 20 minutes

If you want to make sure your layers are very even and unblended you can place the pie in the freezer for about 30 minutes between each ice cream layer addition, which will allow each layer to firm up before more ice cream is added. If you do this, keep the softened ice cream in the fridge while the pie is freezing between stages.