Marshmallows get squished between two layers of toffee chocolate matzoh in one of the greatest things to happen to a piece of matzoh. Ever. 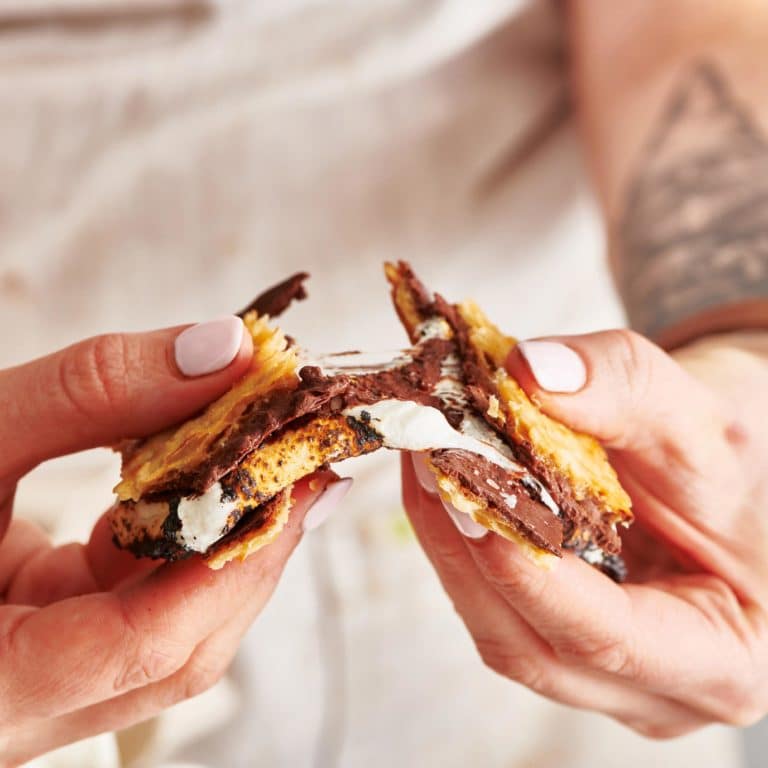 If you have ever had Chocolate Covered Caramelized Matzohs then I don’t have to explain why I am so gosh darn proud of this s’mores idea.  The original Chocolate Covered Caramelized Matzoh recipe was created by Marcy Goldman, and it has changed my world and the worlds of many many people.  Especially those of us who get a bit stymied by the thought of making a flourless Passover dessert that everyone will be excited about.

So after experiencing the joy of Chocolate Covered Caramelized Matzoh you might have leftovers.  Or you might make extra to make these delightful treats. Ok, so s’mores, as we all know are usually graham crackers with a toasted marshmallow (usually toasted over a live fire) are squished up against a square of a chocolate bar.  A fairly perfect food. A quintessential summer pleasure.

This translates that concept with the toasted marshmallow squished between squares (well, probably not perfect squares, but rather irregular slabs) of Chocolate Covered Caramelized Matzohs. The chocolate is built right in, along with a layer of caramel and a sprinkle of kosher or sea salt which elevates every single dessert as far as I am concerned.

Toasting Marshmallow on the Stove

If you are a person with a grill, and if you feel like the weather allows, by all means toasted the marshmallow outside.  Otherwise if you have a gas stove, you’re in business.  Just skewer the marshmallows on a skewer and hold them over the flame.  Don’t let them catch fire, but keep turning them until they get browned and soft.

Toasting Marshmallow in the Oven

If you don’t have a gas stove, you can make these in the oven.  Just line a sheet pan with parchment paper or foil and preheat the broiler.  Place the marshmallows in a single layer on the sheet pan and broil for about a minute, watching, carefully, just until the brown.  Flip the marshmallow over and broil for an additional minute or so until the other side is browned.  Layer them between squares of the matzoh as directed below and squish.

Repeat with the rest of the matzoh and marshmallows.

Marshmallows get squished between two layers of toffee chocolate matzoh in one of the infest things to happen to a piece of matzoh. Ever.

If you are following the Jewish laws of Kosher for Passover then you will need to wait until Passover is over to make these.  Or use margarine for the matzoh (I’m sorry, that’s not for me, even though it was part of the original recipe) and make sure your marshmallows are certified Kosher.

More Recipes for the Jewish Holidays: 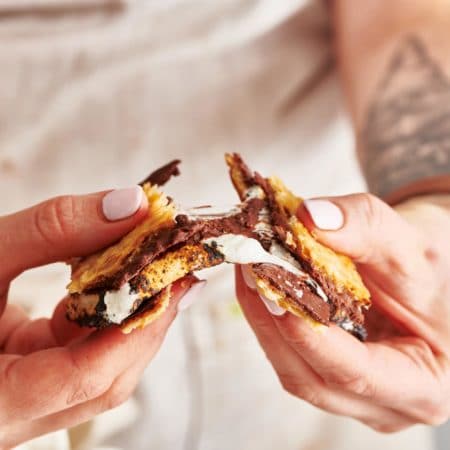 Marshmallows get squished between two layers of toffee chocolate matzoh in one of the greatest things to happen to a piece of matzoh. Ever.
Yield: 20 People
Prep Time: 15 minutes
Cook Time: 15 minutes
Total Time: 30 minutes