This under 30-minute stir fry is packed with flavor and crunch.

This recipe—ready in less than half an hour—has so much flavor, it actually makes your eyes pop open a bit. And so few ingredients make it happen!

I literally couldn’t stop thinking of that old phrase, “Pow! Right in the kisser!” which is a highly politically incorrect phrase that was uttered frequently by a character named Ralph Kramden in an ancient show—way, way before my time, people—show called The Honeymooners.

Ralph, who was the sort of sympathetic, sort of repulsive lead character, who has aspirations beyond his station in life, and frankly his intelligence. As he and his wife got on one another nerves (which happened Every Single Show) he would lob empty threats her way, culminates with him raising a chubby fist and yelling, “Pow! Right in the kisser!” after which the laughtrack would soar.

It was clearly not actually going to happen, and even Ralph’s long suffering wife Alice knew no such thing was going to happen. But still, Ralph really should have kept his own kisser shut.

Ok, now that we did a little dive into the pop cultural origins of this intellectual phrase, we can move back to the Right in the Kisser flavors of this peanutty chicken stir fry.

The chicken is coated with a just-the-right-level-of-intense mixture of garlic, scallions and hoisin sauce, and the nutty crunch from the peanuts is so fabulous. I forgot to top the stir fry with sliced scallions for the pic, but I think you should try not to make that same little mistake.

This under 30-minute stir fry is packed with flavor and crunch.

The chicken could be cut into smaller pieces, if you prefer; these are pretty big chunks. Just keep an eye on them, and shave a minute or two off of the cooking time. I think I will add some broccoli florets next time. Maybe.  Get the rice going before you start cooking the stir fry, so it’s all cooked and fluffy by the time your stir fry gets off the stove.

And you may also want to know: 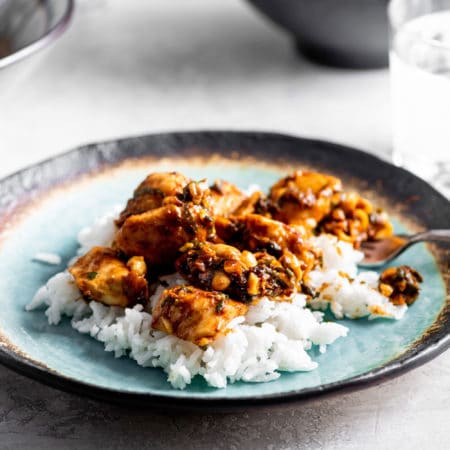