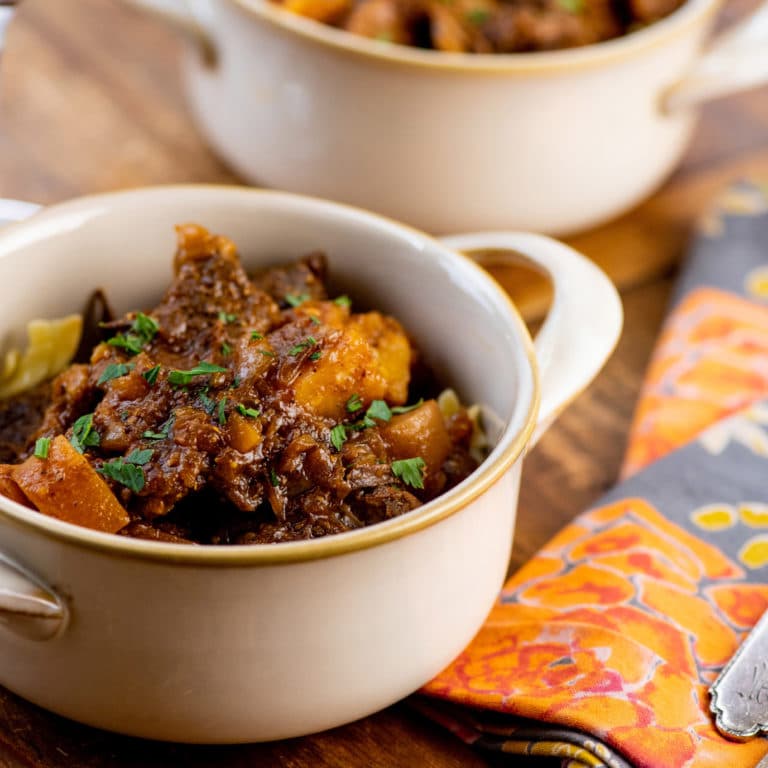 Gary would put barbecue sauce on almost anything.  By almost anything I mean not quite a brownie, but if he orders any kind of chicken sandwich at a restaurant, he will ask if they make it with barbecue sauce, and also if he can have extra barbecue sauce on the side.  This become especially interesting when it is, say, a chicken Caesar wrap.  But hey, the most amazing combinations come from unlikely places.  Who am I to judge (cue Gary snorting).

Anyway, the idea of mixing a beef stew (family favorite) with barbecue sauce seemed to make a great deal of good sense.  (Let’s just say the words “beef,” “barbecue” and “beer” in the same sentence were not going to make Gary sad.)  The idea of having it come together in a slow cooker made even more sense.

When browning beef for a stew (whether you’re making it in a slow cooker, or a regular old pot or Dutch oven), I think it’s less important to get all of the sides of the cubes of beef barely browned than it is to get a couple of sides nicely caramelized. Getting all 6 sides of a cube-ish piece of meat is a bit painstaking, and I’m absolving you from the task.

I actually read a cool browning technique recently which helps if you are making a large amount of stew. Instead of browning all of the beef already cut into small pieces, just buy the stew meat in a whole piece, and cut it into steaks—or buy the meat in steak-form.

Heat a little bit of oil in a pan until it’s quite hot, then sear the steaks on both sides, until nicely browned. Then you cut the meat into 1 1/2-inch pieces.  This technique is another way of making the point that a nice deep browning on a couple of sides trumps barely browning on multiple sides.

If you didn’t have time to brown the beef at all, you would still end up with a flavorful beef stew, but it’s really worth it, I think.

Parsnips look like pale carrots, beige in color, with a wider bottom near the root. They have a wonderful nutty, sweetness. Look for smooth hard parsnips with no sprouting. You could also use all carrots, or mix in potatoes or other root vegetables instead. 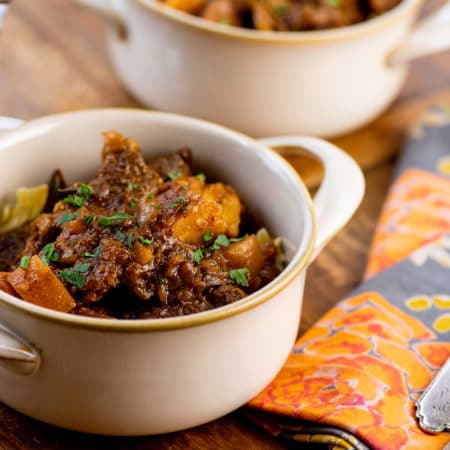