This version of a very popular breakfast dish is crammed with softly cooked chard and spiced with cumin and paprika. 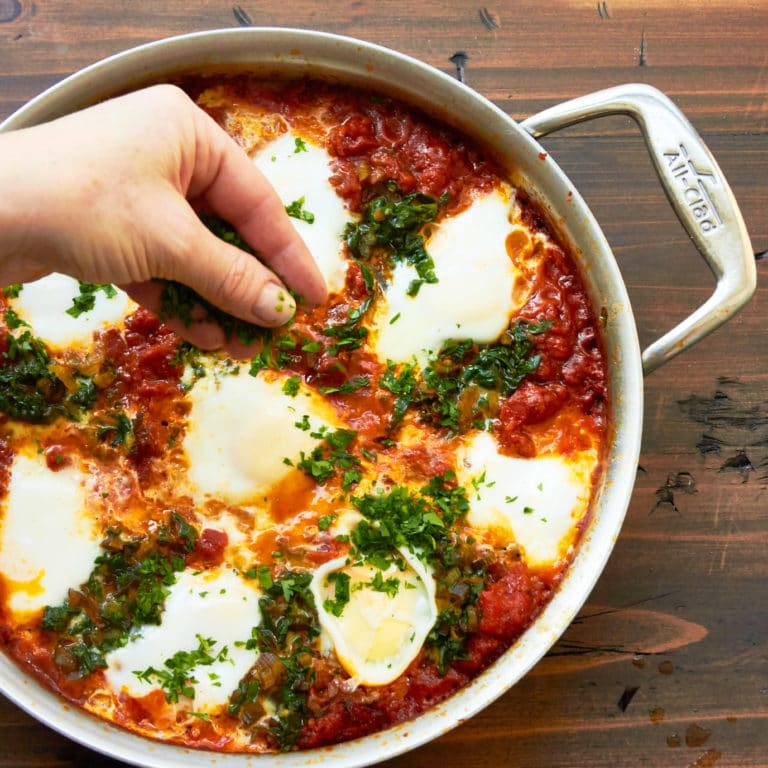 You may have seen versions of this dish in some hipper brunch places, some shiny food magazines, in any of the upscale Israeli or Middle Eastern eateries springing up in cities all over the country.  Not to mention Instagram accounts.  That’s because this is a dramatic looking dish, and some fine, fine eating.

But this is not a new, flash in the pan dish.  This is a dish that has been around for a long time, and that various regions and countries claim as their own (North Africa, Tunisia, Israel, to name a few).

I tend to stick to my stove and borrow a bit of everyone’s culture (with appreciation and acknowledgment!), and make my own squished-together, begged-borrowed-and-stolen version of other people’s national dishes. Essentially it’s eggs gently cooked in a vibrant tomato sauce.  While this dish couldn’t be more savory, it is actually very popular as a breakfast in these necks of the woods.

This recipe produces a generously seasoned tomato sauce, and you are welcome to reduce the amount of cumin and paprika if you want a more gently flavored shakshuka.  The sprinkle of feta on top is a great fresh burst of salty/creamy at the end.

This version is crammed with softly cooked chard, which is one of the greatest greens around.  We all have gotten to know kale – maybe more than some of us actually wanted to.  Let’s be sure to check out this great leafy green as well.  It is pretty gorgeous in its raw state, often with thick stems in many colors of the rainbow.  You’ll be drawn to it at the farmers markets because of its sexy big leaves and pretty colors.  Don’t resist.  The colors of the stems hold up pretty well when cooked, too.

As for the name shakshuka… remember the theme song, from Ferris Bueller’s Day Off, “Oh, Yeah?”?  That what the name of this dish makes me think of, that part where they go, “shaka-shu-kah,” or something like that.  I know; kind of shallow. 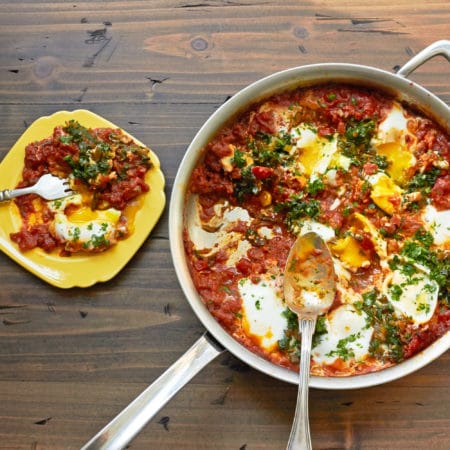