Also known as Catalan Tomato Bread, Spanish Tomato Bread, or Pan con Tomate, this toasted bread with tomatoes and garlic is the most perfect simple appetizer, snack or side. 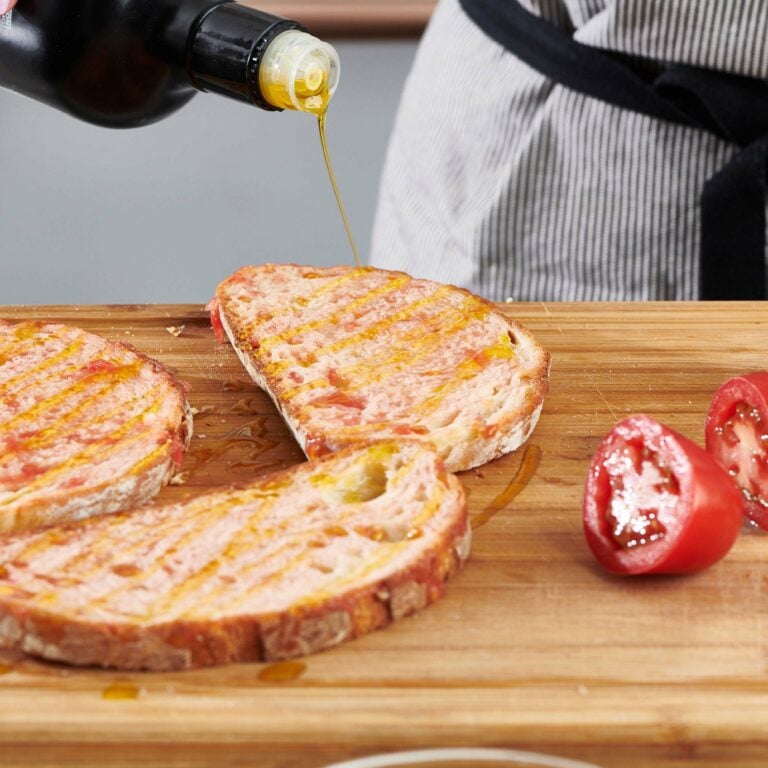 This is one of those quintessential simple dishes that is a mainstay in its country (Spain), served everywhere, and so easy to make that you feel silly for not having it all the time.  It is sometimes known as Catalan Tomato Bread, or Pan con Tomate, which translates to bread with tomato.  If are lucky enough to be in Spain, or at a Spanish restaurant, you may see it listed as pa amb tomàquet or pan tumaca.

It is especially popular in Barcelona, which sits in the region of Catalan, within the country of Spain, and it’s also a mainstay of Majorca. In Spain diners are often given the components of this dish, and they can rub the bread with the tomato and garlic (if they wish; garlic is not always part of this dish), and drizzle it with olive oil on their own.  Tomato bread is best very freshly made, so the bread doesn’t become soggy from the tomatoes as it sits.  But if you want to assemble it ahead of time and serve it immediately, that’s obviously another way to go.

What is Pan con Tomate?

At its most elemental, tomato bread is simply a piece of grilled toast, rubbed with a ripe tomato, and drizzled with good extra virgin olive oil.  A light rubbing of garlic adds another layer of flavor, though you should go easy on it, since you really want to taste the tomato, the bread, and the olive oil.  Don’t forget a sprinkling of salt, preferably kosher or flaky sea salt.

You can toast bread on the grill, in a pan (a grill pan or a regular pan) on in an oven or a toaster oven.  Allow the edges to get nicely browned.  I wish I had allowed the bread to toast a bit more, since those little charry bits along the edges give the toasts even more smoky flavor.

Pan con Tomate: Also known as Catalan Tomato Bread or Spanish Tomato Bread this toasted bread with tomatoes and garlic is the most perfect simple appetizer, snack or side.

I super clearly remember the first time I had tomato bread in a restaurant many, many years ago.  We were at a restaurant in NYC called Casa Mono, and someone ordered it “for the table.”  As soon as it came out, it was gone, and we ordered another batch.  And then another.  It occurred to me that the amount of money we were spending on a piece of bread rubbed with a tomato was stupidly high, but it could not be resisted.  And I went back recently, and guess what? Still amazing.

Well made pan con tomate transcends cost. If you have a chance to visit Casa Mono or Mercado Little Spain in downtown NYC, don’t miss it — ridiculously perfect tomato bread.

How to Make Pan con Tomate

But clearly you are here to make it yourself!  Here’s how:

Cut the tomatoes in half crosswise.  Toast the bread until golden and the edges are nicely browned.  You can do this on a grill, in a toaster oven, in a regular oven, or on the stove in a pan or grill pan. Toast the bread on both sides if you’re doing it in a pan.

Rub the slices of bread lightly with garlic.

Rub the cut halves of the tomatoes over bread, squeezing a bit as you go.

Sprinkle with salt.  Serve immediately, so the bread stays crunchy.

What to Serve with Pan con Tomate: 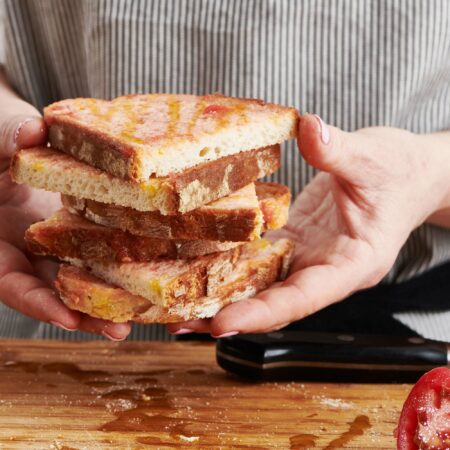