Hearts of palm get their moment in the spotlight in this satisfying salad. 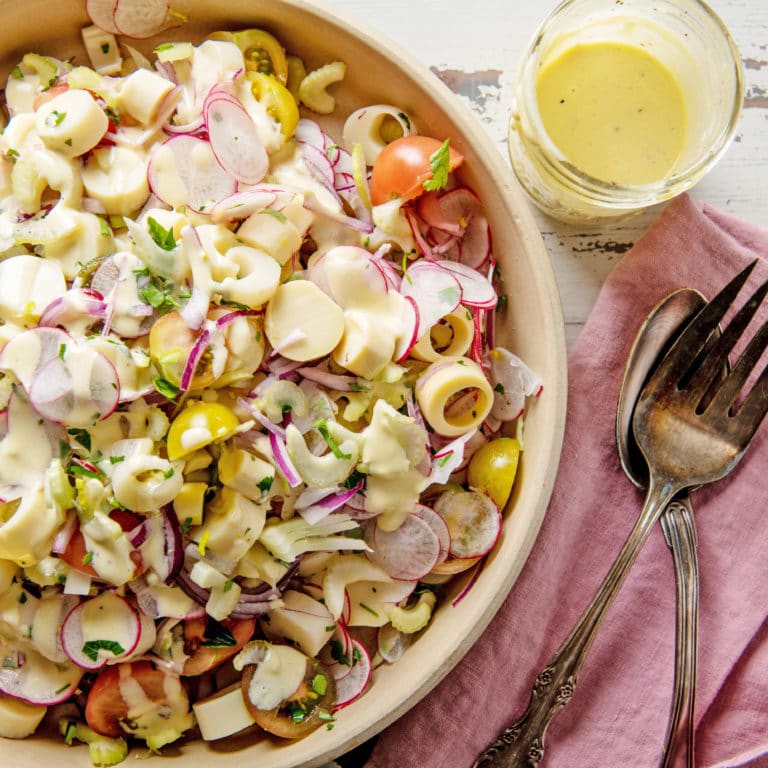 When I was pregnant with Jack, I cooked and ate a one pound bag of edamame almost every day. I know there is some discussion about how much soy one should have in one’s diet, but if you sidestep that dietary discussion, there are worse things one might have as a daily pregnancy habit.

When I was pregnant with Charlie, a few years later, the craving moved from edamame to hearts of palm. This was a slightly more expensive habit, and a little more sodium-heavy, but all in all something I didn’t hesitate to indulge myself in.

I used to buy these hearts of palm two-packs of big jars at Costco, about 6 of them at a time, and I ate about ½ a jar at sitting, at something resembling warp speed. The salt, the texture, the way you could sort of unfurl those little firm stalks….. I can still take down a jar without batting anything.

But when I can hold myself back from demolishing my HOP stock, I also love adding them to salads. Tossing a cup of two of sliced hearts of palm into any green salad, makes it just that much better. But when they are really featured in a salad as one of the star vegetables that is a real treat. The dressing has a hint of creaminess from a very small amount of mayonnaise, and if you think salads are light and fluffy and unsatisfying, a bowlful of this hearts of palm salad should change your mind.

Make Ahead Hearts of Palm Salad

You can make this hearts of palm salad a couple of hours ahead of time and keep it covered in the fridge. Terrific for picnics and potlucks and buffets and any place you need a vegetable salad that can hang out for a while and not lost its appeal. Using different colored tomatoes and radishes gives it extra visual appeal.

Hearts of palm get their moment in the spotlight in this satisfying salad.

Other Great Salad Recipes for a Potluck: 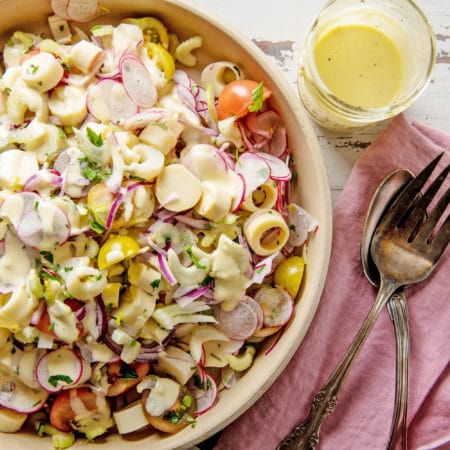 Hearts of palm get their moment in the spotlight in this satisfying salad.
Yield: 6 People