One of the world's greatest comfort foods...and this recipe has a little twist to keep the chicken crispy! 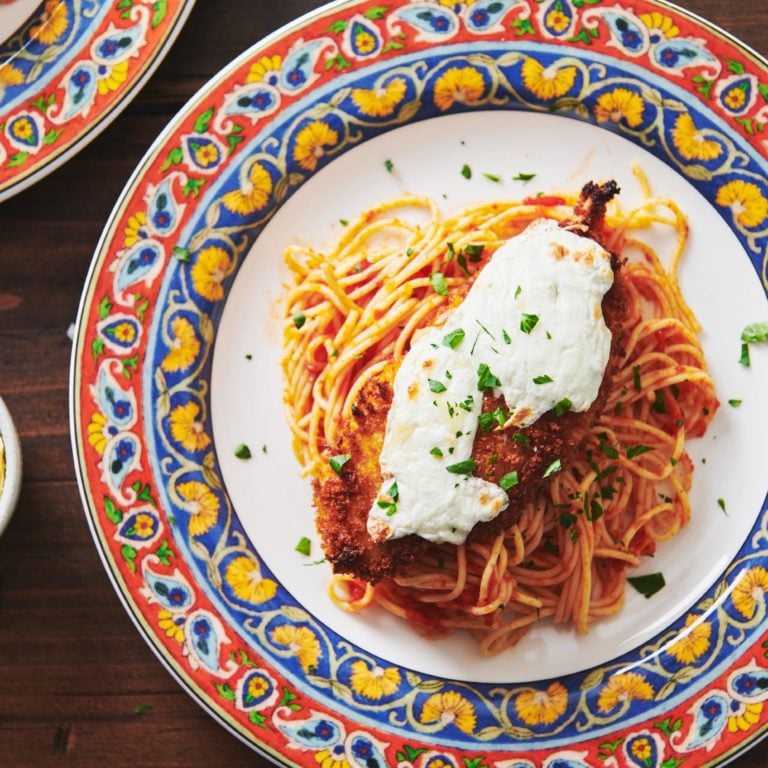 Boy oh boy oh boy do my boys oh boys oh boys love chicken parmigiana.  Because most of us will agree, it is one of those foods in the What’s-Not-to-Love category, yes?  Juicy chicken, crispy coating, tangy tomato sauce, melty mozzarella, zingy Parmesan.  Fried chicken meets pizza, kind of sort of.

What’s the difference? Nothing, just the name. Parmigiana is Italian, and Parmesan is the American way of saying Parmigiana, which actually apparently comes from the French simplification of the work Parmigiana. Either way it’s a beloved Italian-American staple.

And it’s very VERY loved in our world. When I offered our good friend Michael a dinner featuring whatever he wanted (to thank him for taking care of our beloved epileptic puppy while we were away), I presented a number of suggestions to suggest that the sky was the limit.   In fact my exact words were: “Lobster?  Steak?  Chicken parm?”  And he chose chicken parm.  Over lobster.  Because chicken parmesan is in fact that good.

Where Did Chicken Parmigiana Originate?

It is believed that Chicken Parmesan actually originated as a twist on Eggplant Parmigiana, popular in Southern Italy, where lots of eggplant is grown. Eggplant Parmigiana (coming to this blog soon) is fried slices of eggplant topped or layered with cheese and tomato sauce, then baked. In the mid 1900s Italian immigrants living in America (and other places in the world) decided to try chicken in place of the eggplant, and this Italian-American classic was born.

I had a chicken parm thought to experiment with, which I think is a good one.  I wondered if perhaps putting the cheese directly onto the breaded and browned cutlets, baking it in the oven to finish cooking the chicken and melting the mozz, and then topping all of that with the sauce at the end might keep the top of the chicken less soggy.  And it did!

I don’t think it’s the only way to go, but melting the mozzarella directly onto the cutlet without the layer of sauce in between allowed the coating to stay crispier, and then I doused each melty cutlet with marinara sauce at the end, so all of the components were there, just in a different order.

I also love it the traditional way, with the sauce layered in between the chicken and the cheese, though it does sacrifice some crispiness.

Chicken Parmigiana (or Chicken Parmesan) is total comfort food…and this recipe has a little twist to keep the chicken crispy!

If you don’t feel like making the marinara sauce, don’t you worry yourself about that for a minute.  That is in fact what jarred sauce is for.  To make life easier.  If homemade sauce stands between you and Chicken Parmigiana, that would be a crime.

Chicken Parmigiana (or Chicken Parmesan, depending on how authentic you are feeling!) is one of the world's greatest comfort foods...and this recipe has a little twist to keep the chicken crispy!

What to Serve with Chicken Parmesan: 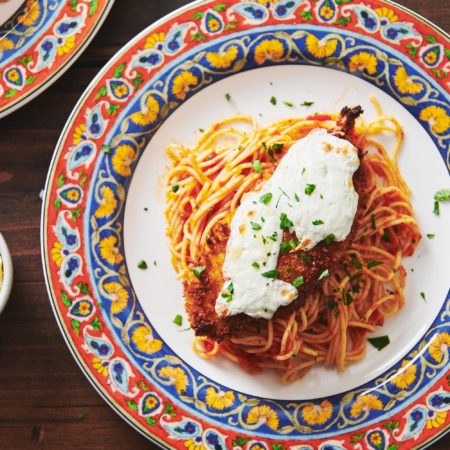