This classic Sicilian eggplant salad, made with vinegar, some sweetness, olives, capers, and tomatoes is amazing heaped on bruschetta or just served as a hearty side. 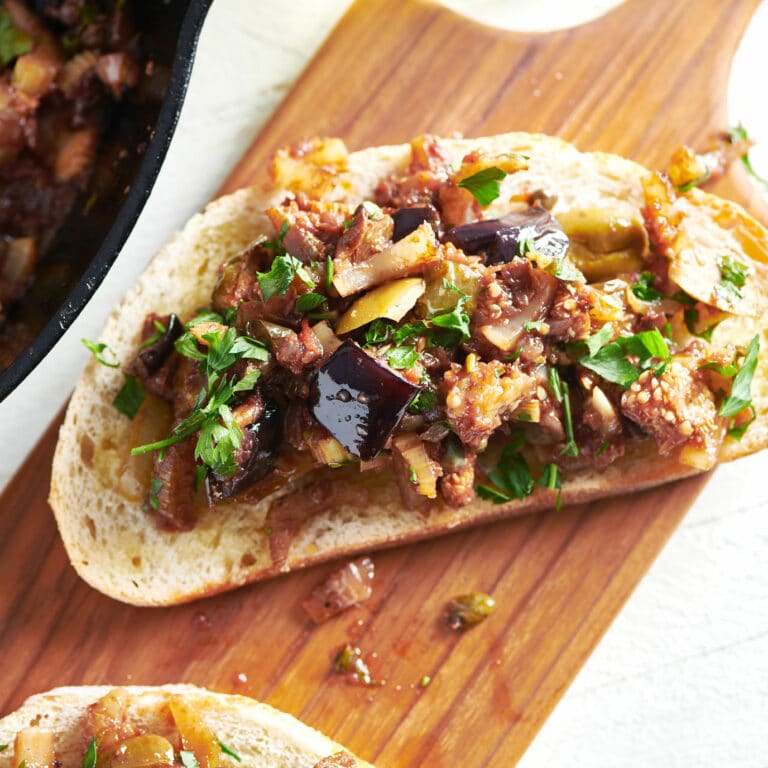 It’s too bad that most dishes made with eggplant aren’t prettier.  I mean eggplant Parm (coming soon!) is quite pretty, but that’s thanks to melty mozzarella, which can make anything look pretty.  And the tomato sauce, which remains pretty distinct.  But other stewed or roasted eggplant dishes – not going to win the beauty contest.

But if you know caponata, or if you just plain old happen to like eggplant, then all is forgiven, yes?  Eggplant is a fabulous vegetable, super versatile, indispensable in a vegetarian diet (unless you don’t like eggplant; then it’s dispensable).

Caponata is a Sicilian eggplant salad, made with vinegar, some sweetness, olives and capers, and tomatoes. Sometimes pine nuts.  I prefer not to peel the eggplant, but if you think the skin is particularly thick, or you just don’t like the texture, you can peel it if you wish.

There are many ways to make caponata, and unsurprisingly many people who feel like their way is the right way.  I have seen the celery blanched instead of sautéed, but I felt like that was a corner I could cut, though I kept the sautéing time short, so the celery would retain some of the crunch.

What Type of Eggplant to Use for Caponata

I used a combo of smaller eggplant instead of one big purple one (more classically Italian) when we shot this recipe.  I used a mix of round steaked Thai baby eggplants, some Japanese eggplants, and you can mix and match which kinds you use.  You are looking for about 1 ¼ to 1 ½ pounds total eggplant.

Sometimes a lot of oil is used to cook eggplant, and the eggplant is basically deep fried – sometimes it’s just sautéed.  I used a generous amount of oil, but not a deep-frying level of oil.  And I have seen recipes with a lot more sugar (or sometimes honey), but I have no love for sweet vegetable salads.  And because you salted the eggplant, you won’t need to add any additional salt as you prepare the recipe – plus there is salt coming from the capers and olives.

The parsley at the end is not optional.  It’s not a garnish – it’s an ingredient.  This salad is earthy and lusty and begs for the freshness a big handful of chopped parsley brings.  You could also try mint, though maybe a slightly smaller amount.  Also, basil.

How to Eat Caponata

Caponata is eaten as part of an antipasti plate, or on its own to start a meal.  It’s also a great side dish for everything from chicken to fish to pork.  My favorite way to serve and eat caponata is on toast, essentially caponata bruschetta, which is very fun and feels quite Italian to say.

Caponata: This classic Sicilian eggplant salad, made with vinegar, some sweetness, olives, capers, and tomatoes is amazing heaped on bruschetta or just served as a hearty side.

And here it is with Killer Roasted Chicken and a simple salad.  A very good pairing.

What to Serve with Caponata: 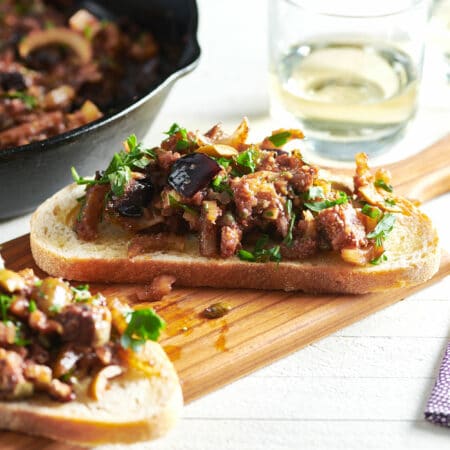