One of the amazing dishes that appears on the table during Ramadan is Fattoush, a salad with a flatbread (like pita), tomatoes, and cucumbers, and we all need to bring this into our lives. 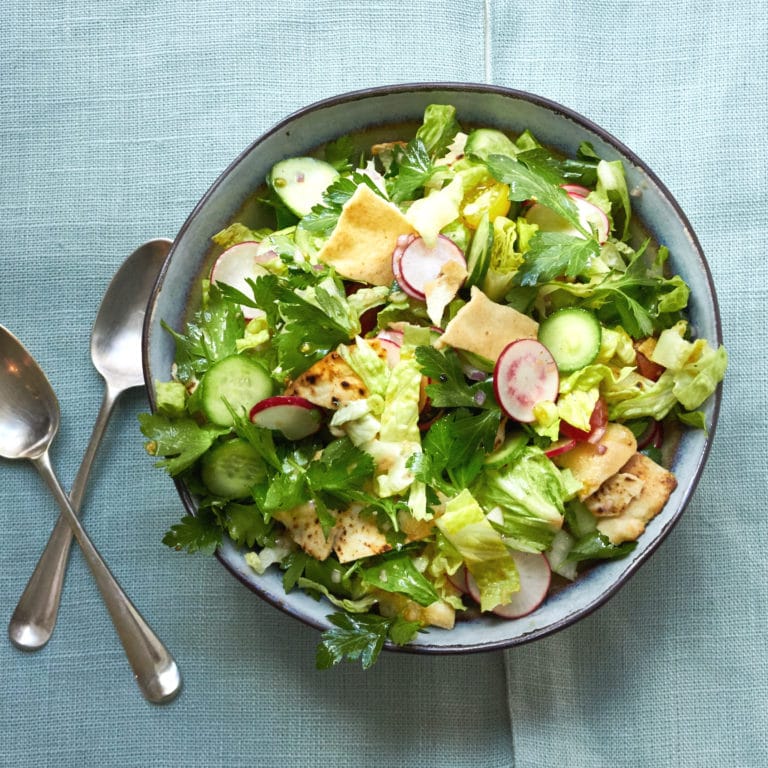 In the month of Ramadan, observant Muslims perform daily fasts from dawn to dusk every day, only breaking the fast with a meal (usually a light one) after the sun sets.   During the daylight hours other affirmative customs are also practiced, such as a renewed attention to charity work, and additional prayer.   Fasting is intended to cleanse the soul, allowing Muslims to take time to turn their attention inward, away from material things.

At the end of the month, there is a celebration as they end the month of abstinence. One of the dishes that appears on the table during Ramadan in many Leventine countries (which cover a big chunk of the Eastern Mediterranean/Middle East) is Fattoush. It may be served during the daily evening break fasts over the month, and it is often part of the big celebratory spread served to commemorate the end of Ramadan.

Many countries have a version of fattoush….and then multiply the number of people in all of those countries to get the number of possible versions of the dish. Like many cross-cultural dishes, researching the different approaches is both fun, and slightly exhausting. Always some type of flatbread, such as pita, tomatoes and cucumbers. But then….lettuce, or no lettuce? Vegetables sliced or diced? Radishes? Peppers? Lemon or lime juice? A bit of sweetener? Sumac? Choices to be made.

Mince your garlic as much as you can, so it really blends into the dressing. A way to get it super fine is to chop it quite a bit, then sprinkle on a bit of salt, drag the flat side of the knife blade across the garlic several time, pressing down as you go to create a paste. Chop some more, drag the knife over it once again, repeat, and soon you will have a fine garlic paste.

I used a little bit of pomegranate syrup in my dressing, because I had a bottle lying around (which I realize is not normal for most American cooks). Use honey if you are not as ingredient-nerdy as I am (or find the syrup online or in a specialty foods store).

Sumac is a spice made from berries that grow wild on bushes all around Lebanon and other countries in the region, and a classic fattoush seasoning. The flavor is tart and tangy. You could use that instead of the za’atar, which is a lovely, tangy and earthy combination of sumac, thyme, sesame and marjoram (sometimes cumin)….and often easier to find in supermarkets. 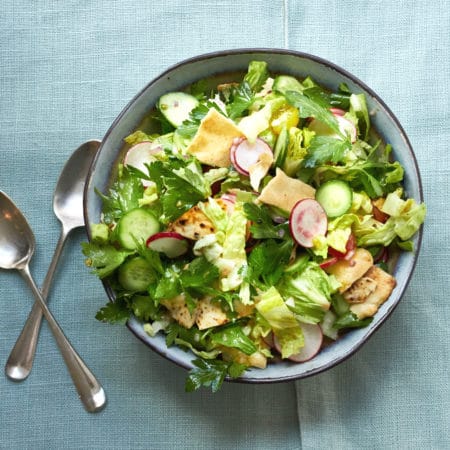 One of the amazing dishes that appears on the table during Ramadan is Fattoush, a salad with a flatbread (like pita), tomatoes, and cucumbers, and we all need to bring this into our lives.
Yield: 6 People
Prep Time: 20 minutes
Cook Time: 5 minutes
Total Time: 25 minutes

For the Pita Crisps