Smooth and creamy and the caramelized brown sugar salty-sweet thing going on that hits you in the back of the throat in the most pleasant way. 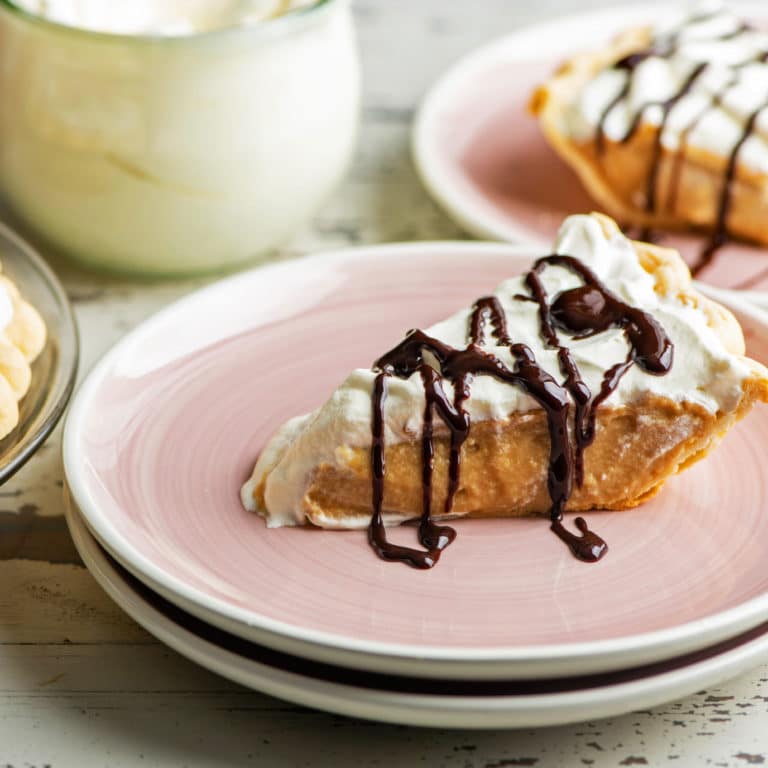 Oh, wow, are we ever heading into the biggest pie season of the year! And my family is all in – perhaps never having met a pie they didn’t like. Apple, sweet potato, quiches and other savory pies, you name it.

But I had never made a butterscotch pie. Just the name alone is marvelously old-fashioned. I started looking at various butterscotch pie recipes for inspiration, searching online, and from older nostalgia-inducing cookbooks. Many recipes used words like “scald,” sometimes double boilers and ice baths were called for, and in days of yore crusts were always made from scratch.

And you, dear readers, probably know by now that from-scratch crusts aren’t my thing…. I am never without a few of their refrigerated crusts and doughs in my fridge, and since it’s pie season, pie crusts are always at hand these days.

There are so many ways to make butterscotch pie! Who knew?   Some called for evaporated milk, some regular milk, some cream. There were recipes with flour in the filling, some with cornstarch, some both. Some involved a baked filling, while others just allowed fillings to set in pre-baked crusts. Some had meringue on top, others whipped cream.   I read and mulled and read some more.

Salted Butterscotch Pie: Smooth and creamy and the caramelized brown sugar salty-sweet thing going on that hits you in the back of the throat in the most pleasant way.

Sometimes hot milk was added to eggs, sometimes an egg and milk mixture was slowly added to hot butter and sugar. However you do it, when raw eggs met heat, a technique called “tempering” has to be involved, which means that the eggs are slowly heated within other ingredients, so they don’t cook and scramble on their own. This is a non-negotiable part of a custard pie.

In short, there were a lot of directions to explore. I played around with a few approaches, with a simple objective: a quick and easy pie with great flavor and texture. I hope you will agree that this pie achieves those goals. And also—a hit of salt to balance out the sweet. I figured, hey if it works for caramel, it surely has to work here.

And, oh, it did. Smooth and creamy and the caramelized brown sugar salty-sweet thing going on that hits you in the back of the throat in the most pleasant way. Charlie pronounced this butterscotch pie amongst the best pies I’ve ever made, and it’s going to make its larger debut at a Friendsgiving celebration I am hosting in mere days.

Precooking, or blind baking, the pie crust pretty much all the way allows it to firm up since the cooking time for the filling is much shorter than it to would take to allow the crust to cook though. Make sure to save the rice or beans you cook with for the next time—you can use them pretty much forever—just make sure to keep them in a jar labeled “baking weights” because that’s what they are (and they aren’t good to cook normally after you bake them). 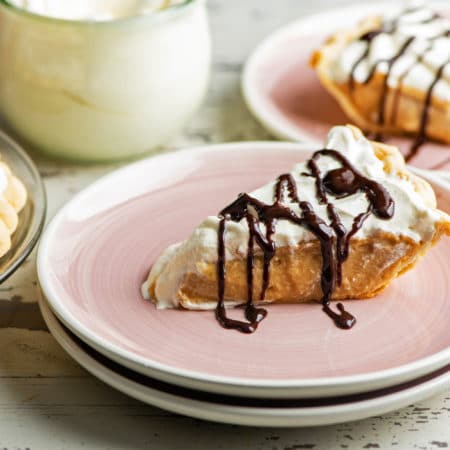 Smooth and creamy and the caramelized brown sugar salty-sweet thing going on that hits you in the back of the throat in the most pleasant way.
Yield: 10 People

For the Salted Butterscotch Filling