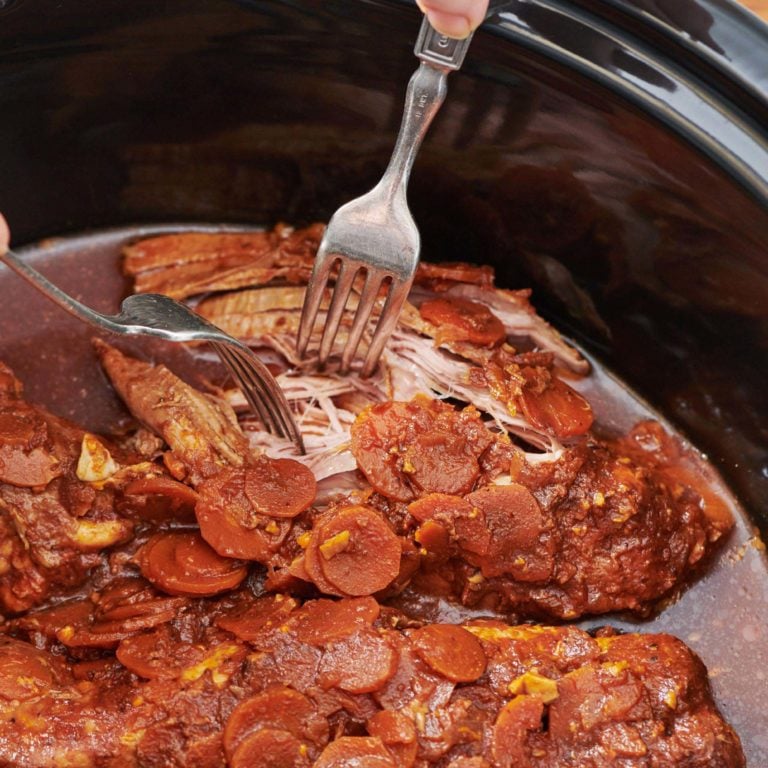 Because I had a pork loin in the fridge, and there was no way in hell I was tossing that baby out. Freeze it?  Reasonable thought.  But there were actually two pork loins in the fridge I was dealing with (don’t ask), so one got frozen, and the other was to become dinner.  Also, I had already brined it earlier in the week.  And after all, one last home cooked meal for two weeks seemed like the right thing to do.

I know.   We all try to consider these depression era-esque impulses part of my charm.

I was getting ready to roast it, and then a package of hamburger buns revealed themselves, and after that all I could think about was pulled pork. But pork loin is a much more lean cut of pork that the shoulder or butt usually used for pulled pork or carnitas, so I figured maybe the slow cooker could help work some magic, and if the meat—which would be already more tender from the brining process (see Notes)—was cooked in the barbecue sauce itself, in a low and slow environment it would become as tender as a fattier cut of meat.

While the pork was doing its thing we ran around packing and doing last minute errands, and pretty much yelling at each other—I hope my household isn’t the only one that feels like it’s going to erupt into flames before a big trip.

In this Slow Cooker Barbecue Pulled Pork Loin recipe a pork loin is slow cooked in barbecue sauce, and it becomes as tender as all heck.

If you ask my kids, I’m not right that much at all.  In fact, it’s more like a lunar eclipse, the frequency of my rightness. But my little peanut gallery conceded that this time, I got it right.  The meat became fall-apart tender, and I shredded it with two fork right into the crockpot, so it got mixed in with the barbecue sauce and the cooking juices.  I have also made it in a crockpot without brining the meat first, and frankly it was pretty much as tender.

What to Serve with Pulled Pork Loin

Tropical Fruit Salsa was the perfect match for this meat piled up on a bun.  But you could use any salsa, and you should play around with options.   Here are 8 Fruit Salsas to Change Things Up!

P.S. The barbecue sauce comes together super fast, and you will have leftover sauce for drizzling on the sandwiches and also for using in other things later in the week.  Use jarred barbecue sauce if you want it make it stupidly easy. 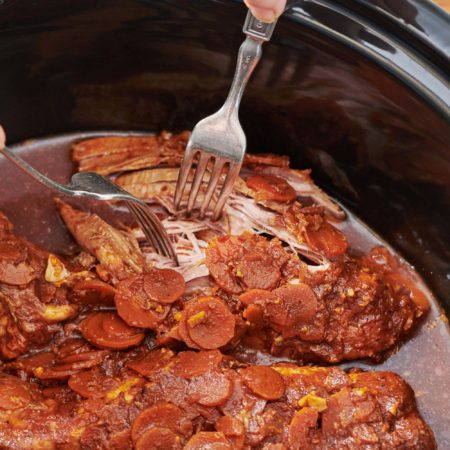 For the Barbecue Sauce

The most basic reason for brining is to add moisture and flavor to meat, especially lean meats that tends to get dry when cooked, such as turkey or pork loin.   The most basic brine is just water with salt and sugar dissolved in it.  And then you can add whatever you like in terms of seasonings, from simple peppercorns, garlic and bay leaves, to lemongrass, herbs, and citrus zest.