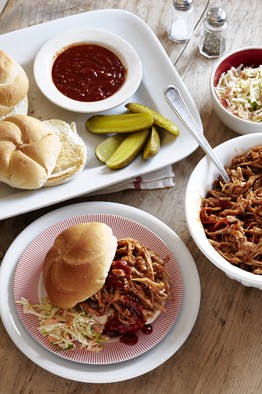 I have been an almost-vegetarian, non-red-meat-except-a-bit-of-bacon-eater since the age of 12, and as such had never eaten a pulled-pork sandwich, nor even been terribly tempted by the thought.

But about a year and a half ago I was helping my sister-in-law cook for a party, and her restaurateur father, known to his grandchildren, and the rest of the family, as Nutzie, came in the door bearing several large aluminum containers of pulled pork, which he had made at his mom-and-pop restaurant in Worcester, Mass.

The lids came off and the smell almost made me weep with longing. I watched everyone pile pulled pork onto rolls, took one little bite of my husband’s sandwich, then another, and fell right down the rabbit hole.

After several months of gently nudging Nutzie for his recipe, I finally got a scrap of paper with the following: “Pork loin (whole) or Pork loin bone in butt end. Roast in oven covered pan ¼ way up w/water. Beef base broth, liquid smoke, S & P. 350 until falling apart. While warm strip meat off bone/pulled with fork. Add BBQ sauce to taste.”

Huh. Not a lot of detail. I knew that pulled pork is practically the definition of barbecue in the Carolinas and Tennessee. There, as well as in other parts of the country, it usually entails a big marbled hunk of pork shoulder, which is prepared using a combination of smoking and slow cooking over a low fire. Then the meat is shredded and seasoned with a sauce that has a good kick to it, sometimes very vinegar-centric (as is common in most of North Carolina), sometimes with tomato (some parts of North Carolina and other areas of the country), and sometimes with some mustard thrown in (South Carolina).

I set about decoding the recipe. During the process, I checked in with my friend and barbecue expert, Elizabeth Karmel, North Carolina native and executive chef of Hill Country Barbecue in New York. She sanctioned the recipe’s call for baking the pork in an oven, simply saying that there was more than one way to make pulled pork, given dictating circumstances (i.e. my not having a smoker or fire pit). And because it’s not yet a terribly steamy time of year, turning your oven on is still a welcome thought.

Pork butt doesn’t take kindly to blasts of high heat, so don’t think you can cheat by turning up the heat and reducing the cooking time. This will yield an unpleasantly tough hunk of meat. Definitely not worth all of your work and patience.

The pork is braised at 350 degrees (don’t even bother looking at it until at least 3½ hours have passed; you will just be wasting your time) until it reaches an internal temperature of 190 degrees, or, as Ms. Karmel describes, “until the bone slips right out, clean as a whistle.”

Also, after four tries, I came to understand that when it comes to adding liquid smoke, there is a very fine line between a pleasant hint of smokiness and feeling as if you licked a tire. The winning amount, in the case of this recipe, is 1 tablespoon.

After the meat is cooked, and left to sit for a bit to reclaim its juices, pull it apart into hunks (you may want to use rubber gloves since the meat will still be pretty hot). Toss the bone and any fatty bits, and then finely shred the meat with two forks or your fingers. The shredded meat is then tossed with a homemade barbecue sauce, more bracing than most with a good amount of vinegar, which nicely counterbalances the seriously unctuous meat.

Ms. Karmel kindly pointed out that my recipe was like a melting pot of pulled porks, with the sauce bringing together elements from all different areas of regional barbecue. I know this was a gentle way of telling me Nutzie’s pulled pork was neither here nor there in terms of authenticity, and chose not to analyze the comment too closely.

Homemade barbecue sauce is one of those things many people don’t think to whip up, but once they do, the bottled stuff never looks quite the same. This ketchup-based version gets its pep from onion, garlic, Dijon mustard, chili powder, chili sauce, and that basic but inimitable refrigerator staple, Worcestershire sauce. Honey and brown sugar provide the sweetness, and you can spike the mixture with as much tangy apple-cider vinegar as you like.

One friend from Kansas City (where they also have, shall we say, firm opinions about barbecue) pronounced this pulled pork the real deal, and that was all the praise this New York City girl who adapted a pulled-pork recipe from an Italian grandfather from Massachusetts needed. 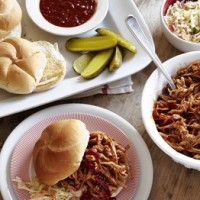