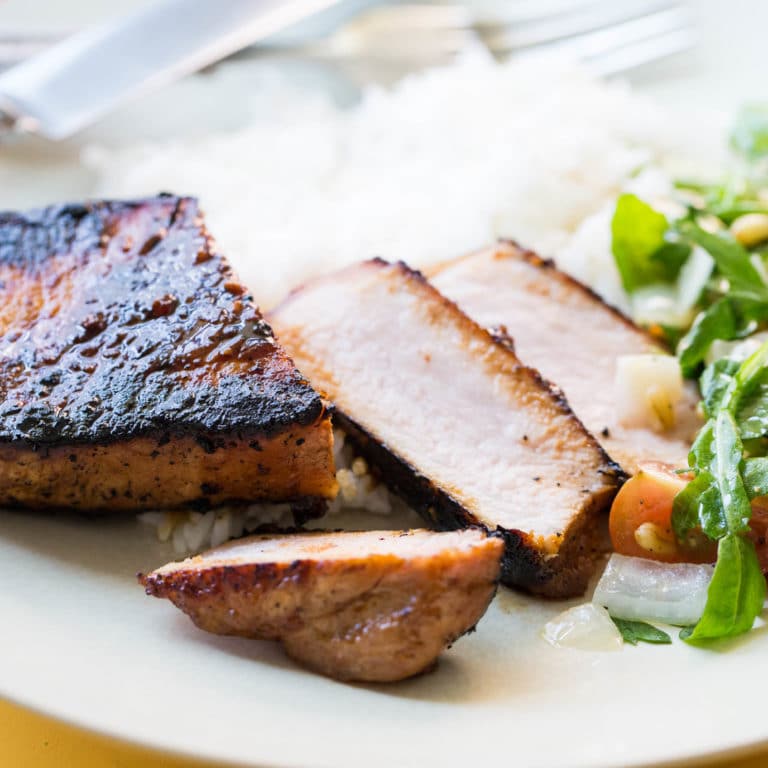 Korean food is one of my kryptonite cuisines.  I am smitten with the flavors.  I just made some Korean short ribs, flanken cut, for my AP column, and now just want to use these flavors everywhere.

Sesame oil, soy sauce, garlic, a bit of sweetness, a bit of heat.  Whenever you apply this combo of flavors to ….well pretty much anything, you are going to get something good.

In this case the heat comes from a traditional Korean ingredient, and one that’s become very readily available, Gochujang sauce.  Gochujang is a classic Korean hot paste, traditionally made with chili peppers, fermented soybeans, brown sugar glutinous rice, and salt (really, it’s so much better than that description would lead one to believe) that is winning new fans every day for its pungent heat.

It lasts for ages in the fridge. Just a little dab will do you, but I love it, and I’m adding it to everything these days.

Look for toasted sesame oil which has a darker color and a richer flavor.  Sesame oil, once opened, should be kept in the fridge to prevent it from spoiling too quickly.  A little bit is all you need to impart that toasty nutty taste to any Asian dish.

Korean Pork Chops: Is this a gorgeous glaze, or what?

How Long to Cook Pork Chops

If you have thinner pork chops, reduce the cooking time.  You really want to make sure that they don’t overcook.  Anyone who’s ever eaten an overcooked pork chop, which is most people who’ve ever eaten a pork chop, knows why.

While you do not need to brine your pork chops before cooking them, if you have time you will ensure that the results are tender and juicy.

There is one other thing that in good conscience I must mention.  Whomever has to clean the pan may have a bit of scrubbing to do.  It would be less work with a nonstick pan, but you get such a great crust with a cast iron or heavy metal pan, that I think it’s a sacrifice worth making.

But I guess I should also mention that my husband usually does the dishes.  So it’s not usually my personal sacrifice.  But life is filled with comprise.  I’ll see if this philosophical nugget flies while he is cleaning the pan.

What to Serve with Korean Pork Chops

Serve Korean Pork Chops with rice and a salad – I happened to have some of this salad around, and it was a perfect companion. 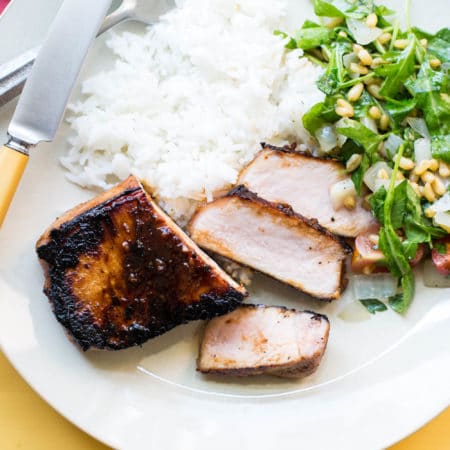