How to Cook Lobster Tail

How to Cook Lobster Tail: There are several super simple ways to cook restaurant-quality lobster tail at home. 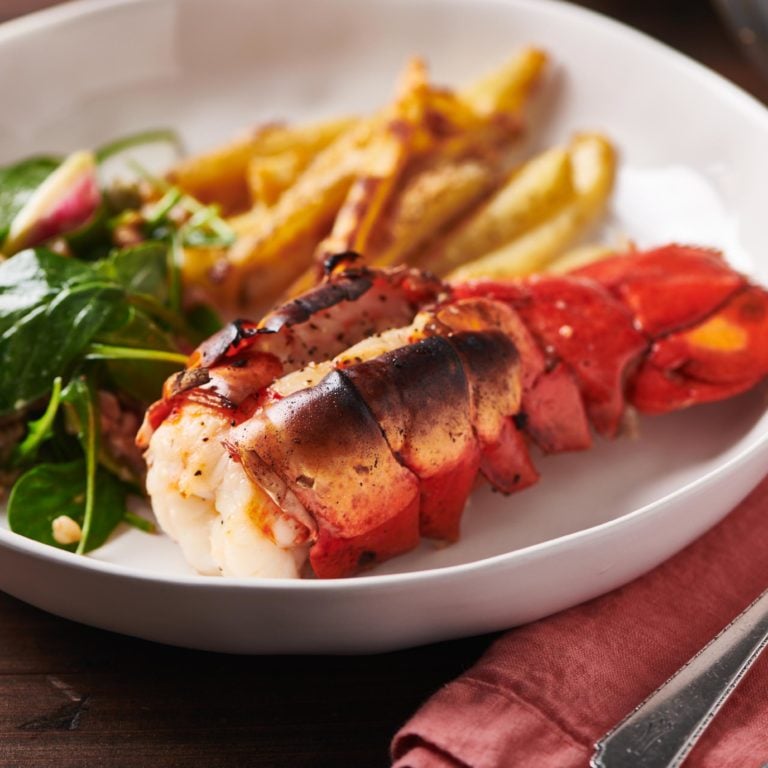 Many of us have only enjoyed a lobster tail dinner at a restaurant, whether a high-end chain, or a full-on seafood restaurant, or maybe a steakhouse (possibly even surf and turf, on a very special occasion?).  What might be surprising is how easy it is to cook it at home (think: New Year’s!).  Can you melt butter and turn on the broiler?  Then you can make a lobster tail.

And while I don’t understand people who think that eating a whole lobster is too much work (have you heard people say that?  Nuts, I say), I know they are out there.  There is also the fact that eating a whole lobster is rarely a delicate or clean endeavor, and in my case I feel like I have to know the person sitting across from me is quite fond of me, because watching me dismantle a lobster is not pretty.  No morsel stays in the shell, and those little wipes aren’t what I need at the end of the meal.  Think more along the lines of a Silkwood shower.

There are actually a number of ways to cook lobster tail.  The four main ways are grilling, steaming, broiling and roasting, and all yield utterly delicious lobster meat.  Boiling is also a possibility, but it’s best to save that method for when you are cooking a whole lobster in the shell, so that the delicate, delicious flavor of the meat doesn’t dissipate into the cooking water.  Baking also works, but I prefer the blast of high heat you get from roasting or broiling over baking, which seems to give the lobster a little bit of extra sweetness, and possibly caramelization.

Following, a quick rendition of the primary methods, and an easy recipe for broiling lobster tail. The main lobster cooking tip?  Don’t overcook it.  It’s that simple.

How to Cook Lobster Tail: There are several super simple ways to cook restaurant-quality lobster tail at home.

Picking the best seafood is just as important as knowing how to cook it.  Especially when you are going for something pricey, like lobster.  There are a whole set of things to look for when you are buying whole, live lobsters, but let’s focus in on the tail here.

As with whole lobster, much depends on when in the molting phase the lobster was when caught.  In short, the harder the shell the better.  This means the lobster has fully filled out its shell, and you will get a larger amount of tender, sweet, firm meat.

Make sure you are buying cold water lobster tail (unless you have the intention of doing otherwise).  This is the kind of quintessential lobster most of us think of when we think of a traditional shore dinner, with its sweet, clean taste, and dense texture.  Most of these lobsters in this country come from Maine (which boasts a lobster on its license plate).  Warm water lobster usually doesn’t get as firm when cooked, and the texture can be a bit grainy.

Buy from a reputable source.  Either go to a quality fish store, or buy from a place that sells lots of lobster tails with high turnover, like a price club.  There are lots of online sources for lobster tail, too – read the company reviews before buying.

Avoid lobster days with any grayish discoloration, or dark spots, which could indicate day (warm water lobster tails also have spots, but this is presuming you are looking for cold water lobster).  Make sure there is no yellowing of the meat itself.  Look or ask to see if there is extra water or any other product injected into the lobster before buying.  You want pure lobster meat.

More often than not, the lobster tails you see at the market, or the fish store, or Costco have been frozen, or are frozen.   That’s fine – most seafood in general is frozen at some point in order to maintain peak freshness, unless you are getting something air flown, or are right near the water.

How to Thaw Lobster Tails

Thawing Lobster in the Refrigerator

The best and easiest way to thaw lobster tail is in the refrigerator, in its packaging, or transferred to a sealed container.  Lobster tails should thaw in one day, unless you have really large ones well north of one pound each (in which case, lucky you, and what is your address?).

You can also place the lobster tails in a very well-sealed zipper top bag and place that bag in a bowl of cold water.  Make sure the bag is tightly sealed so the water doesn’t soak into the lobster meat.  This should take about 4 to 8 hours, depending on the size.

How Long to Cook Lobster Tail

Grilling lobster or lobster tail is a seasonal endeavor, unless you are a hard-core griller.  The amount of time it takes is about the same as for the broiler method, 8 to 10 minutes for an 8-ounce tail.  You can flip the lobster tail once during the grilling if you want grill marks on the top of the lobster.  You will probably want to give it one final more baste on top of the lobster meat with the garlic butter (or just plain melted butter) when you take it off the grill, if you flip it upside down.

For a full description of how to grill lobster tail click here!

Bring a pot of water with a steamer insert to a boil.  Place the lobster tails in the steamer basket.  You can leave the shells intact, or cut them down the top as directed below.  Steam for 8 to 10 minutes until the meat is opaque.

Preheat the oven to 450°F.  Using kitchen scissors, cut the top of the shell down the middle the spread and open the shell a bit to expose the meat (this might be easy or hard, depending on how attached the meat is to the shell — it’s all fine).

How Long to Bake Lobster Tail at 400°F

Place the lobster tails on a rimmed baking sheet or other baking pan, brush with the garlic butter (see recipe below) and cook for about 8 to 10 minutes until the meat is firm and opaque (white) and an instant read thermometer registers 140°F in the center of the tail.

Preheat the broiler, and place the rack about 6 inches away from the heat source.  Using kitchen scissors, cut the top of the shell down the middle and spread open the shell a bit to expose the meat (this might be easy or hard, depending on how attached the meat is to the shell – it’s all fine).

Brush with the garlic butter.

How Long to Broil Lobster Tail

Broil for about 6 minutes until the meat is firm and opaque (white) and an instant read thermometer registers 140°F in the center of the tail.

What to Serve with Lobster Tail: 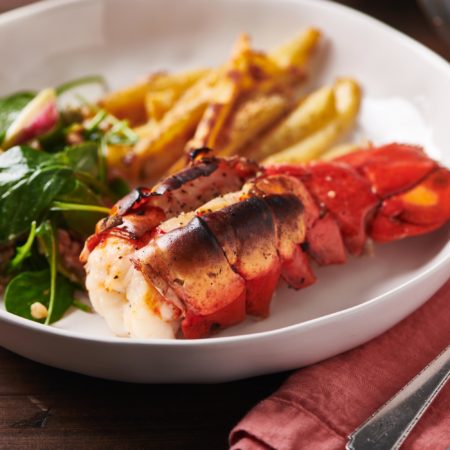 How to Cook Lobster Tail