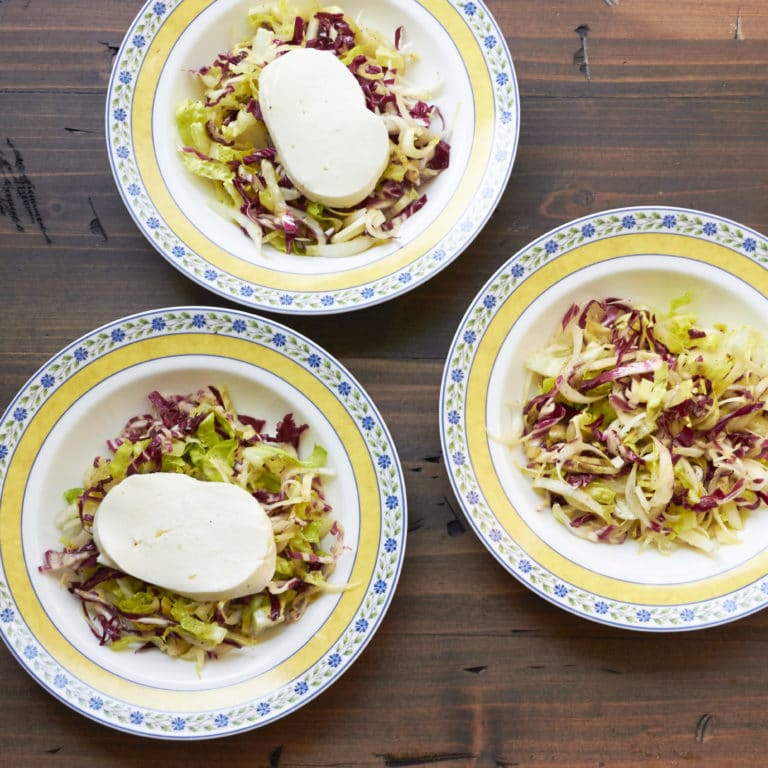 I originally made this salad or us to eat while watching the last episode of a season of Downton Abbey.  But it was delicious and so I have made it since…. and then I just took some new photos because it’s also quite pretty and I have been on a radicchio bender (oh, that just sounds weird…..actually, it just is weird).

SO….now you will read the following which I wrote a number of years back in the context of the framework it was written (or feel free to skip ahead to the recipe if you were not a Downton Abbey freak like I was — no hard feelings, I promise).

Is tonight really the last episode of the season for Downton Abbey?  Did everyone realize this but me?  I am already a little bereft.  Even though it will be a two-hour episode I can’t quite imagine how they will wrap up all of the dangling plot lines.  And too many cliff hangers are hard to take.

Mary’s love looks like its getting a second wind (does she spend any actual time with her child, by the way?  Just wondering.), Edith will head for Switzerland for a prolonged vaca with Rosamond (eg, gestation and childbirth), Robert is off to America to deal with a family mess concerning Cora’s brother (in those days would it have been a tiny thought that maybe Cora should go herself?  No.).  Rose is hell bent on marrying Jack Ross to screw her mother, Tom has a bit of a spark with a local girl.

And the biggest story, in my mind: Gillingham and that very bad man Green end up back at Downton, and now, despite Green’s obliviousness, too many people know.  Including Bates.  Especially Bates.  And suddenly, Green has a terrible accident.

What to prepare to accompany such a momentous episode?  I’m still not sure what I’m doing for main course will be, but I know what the salad will be.  Most of the time the salads my kids lean towards involve mild lettuces, romaine being the house favorite.  I buy multiple packages of hearts of romaine every week.

But this weekend one of my favorite co-chefs, Chris Styler, and I were going for a slightly ambitious meal, and I wanted a salad that didn’t fade into the background.  And on top of that they were bringing a huge ball of incredibly fresh mozzarella from a favorite Italian specialty store, and it deserved a worthy salad backdrop.

Endive and Radicchio Salad with Fresh Mozzarella is a salad that doesn’t fade into the background. Plus, it was a hit with my kids.

To my delight—and I’ll say it, my surprise—my kids LOVED this Endive and Radicchio Salad with Fresh Mozzarella.  Had second plates of it.  I had that sensation of not wanting to eat anything else ever again.  Which is why I am making it again for tonight’s Downton Abbey viewing.

Do you hear the silence?  It’s me refraining from making a comment about bitter lettuces to commemorate the bitterness of ending another Downton season. 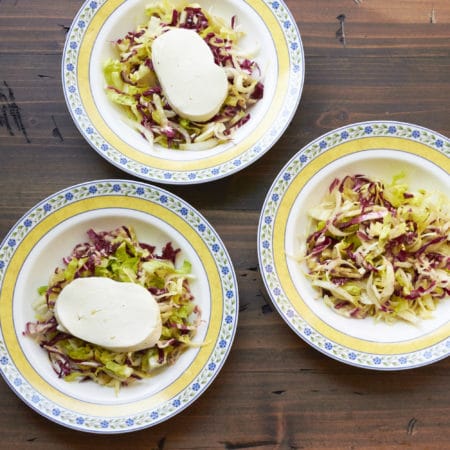