The legend, the recipe. The chocolatey, moist cake from the popular Brooklyn bakery that disappeared in 1972. 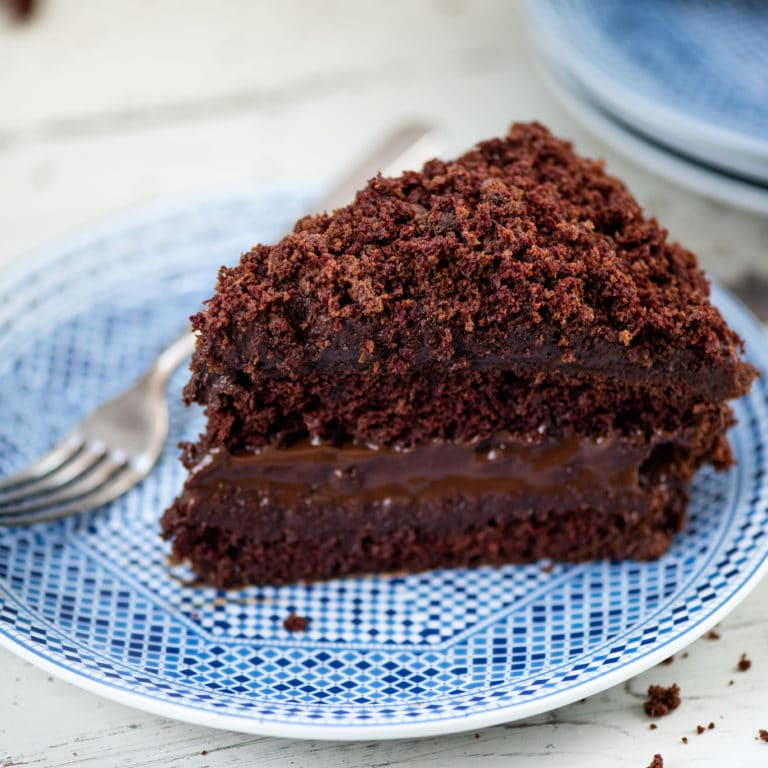 If you don’t like very chocolately chocolate cake then you should move along quickly.  Perhaps you’d like to read about Fruit Salad on a Stick?  Or Shredded Sauteed Brussels Sprouts?  They actually quite delicious.

Now that we’ve gotten rid of the crazy people…..

Ebinger’s Bakery opened in 1898, and grew into a string of 54 bakeries, all over Brooklyn – it was THE bakery, packed with favorites people were crazy about.  Probably the most popular item was the Ebinger’s Blackout Cake, a chocolate monument that Brooklynites lived and died by.  The following was rabid.

And then, abruptly, Ebinger’s went bankrupt in 1972.  The end of an era.  A couple of failed attempts to revive the brand, but no more.  People bought cakes on the last day and froze them, tearfully defrosting them months later, savoring the slightly compromised flavor of a time gone by.

I first read about Ebinger’s Blackout Cake when I was in my early twenties, in a wonderful cookbook by Molly O’Neill called The New York Cookbook, published in 1992 and I knew I had to make it for my grandfather for his birthday.  It sounded magical, the ultimate chocolate cake.  He was then in his 80s and had grown up in Brooklyn during the heyday of Ebinger’s, and I knew he would remember it.

I readied myself to bake this legendary cake.  First, the very moist and very chocolatey cake itself.  Not a simple cake, a cake that involved melting chocolate, whipping egg whites, creaming, folding. I mean not a big deal either, but you know, steps.

While the cake was baking I made the filling, essentially a chocolate pudding in its own right.  More stovetop cooking, lots of whisking, thickening, refrigeration. The original recipe didn’t call for much chilling of the filling,and I added some time, since I am many other bakers found it too loose to really serve as a filling.

Then the frosting: MORE stovetop cooking, 12 tablespoons of butter being added one tablespoon at a time, more whisking, refrigeration.  A total of 25 ingredients in the three components.

The cake was cooled.  And then guess what?  The directions said to slice it into four layers.  HORIZONTALLY.   And crumble one of the layers to sprinkle on top at the end.

The legend, the recipe. The chocolatey, moist cake from the popular Brooklyn bakery that disappeared in 1972.

My dad drove and I carefully, carefully brought the finished cake to my grandfather’s apartment in Great Neck, Long Island, holding it gingerly on my lap.

We had dinner. I lit the candles and presented the cake, excitedly explaining that it was in fact THE Ebinger’s Blackout Cake of his youth.  The very one people reminisced about, dreamed about.  Brooklyn Blackout Cake.  And here it was.  That very cake.  Right here, for his very own birthday.

The male people in my father’s family are not overly prone to effusive praise, and so at some point I was relegated to asking my grandfather, “So, Grandpa, how do you like the cake?”

“Do you know what I like?” he asked, holding his fork aloft.

“What?” I asked, wondering what he would single out first: The flavor?  The texture?  The wonderful layering of components?

Don’t let this diatribe dissuade you. It’s quite a cake. I made it last night, to a much warmer reception. 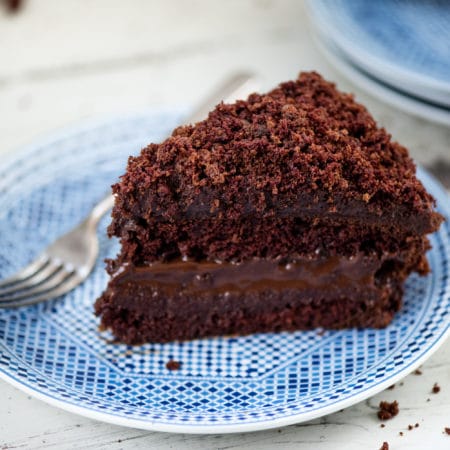