A tomato-tinged brothy Brazilian one-pot dish, fragrant with scallions and cilantro and parsley. 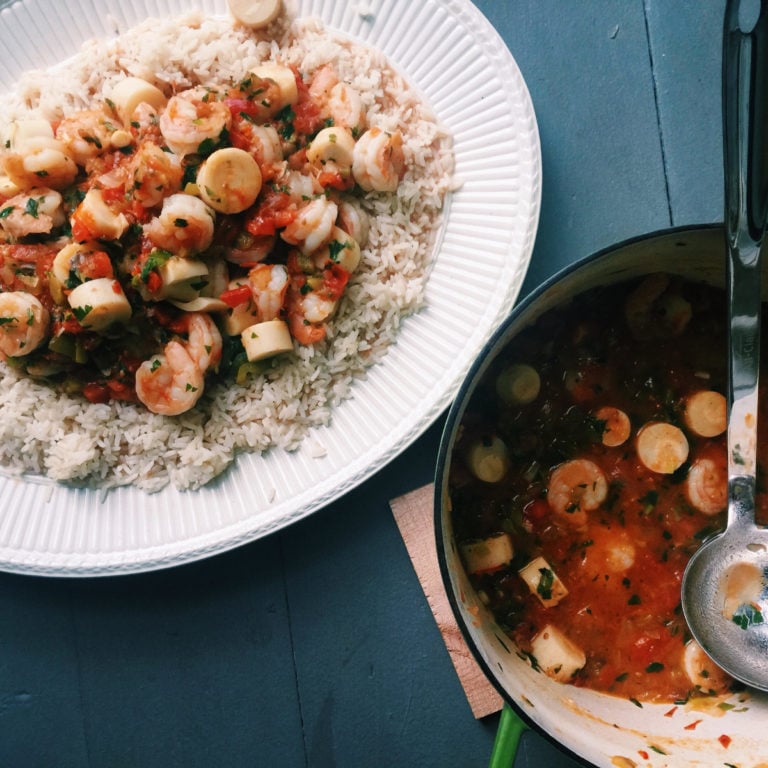 I got to visit Brazil 20 years ago, in the company of my very dear friend Christopher Idone. Christopher wrote a wonderful cookbook called Brazil: A Cook’s Tour, which I edited, published in 1995. (Somehow Christopher, an admired veteran food writer, ended up with yours truly, a pretty junior food editor at the time. A very classic case of “and the rest was history”).

After the book came out, we traveled through Sao Paulo, Rio, and Bahia.  All of the recipes that we had poured over on the pages of the manuscript were suddenly all there in 3-D real life. Dishes red with dende oil, crunchy with manioc flour, aromatic with coconut milk. Rich Feijoadas, creamy Tutu a Mineira, hot and cheesy Pao de Queijo.

The combined cultures of Indian, African, and European (predominantly Portuguese) over the past centuries are visible in the different types of ingredients, techniques, and dishes Brazil.  And in later years an influx of other immigrants have continued to enrich the culture and the food with new influences. You can find hints of Japanese, Arab, Lebanese, North American and Chinese flavors in the food.

One of the dishes I wanted to eat over and over was the Camarões com Palmito, or Casserole of Shrimp and Hearts of palm. We finally this encountered this casserole in the city of Rio de Janeiro.  Two of the most appealing foods ever nestled together in a tomato-tinged brothy one-pot dish, fragrant with scallions and cilantro and parsley.

Christopher and I continued to cook and eat together for 20 more years after our trip to Brazil.  We fantasized abut going back for the 2016 Olympics, knowing that because of his health it was not in the cards.  When he died several years ago he left this world having introduced a whole lot of people Brazilian cuisine.

This recipe is adapted from his classic book, Brazil: A Cook’s Tour. (Sorry, Christopher, I love you, but I didn’t make my own shrimp stock). 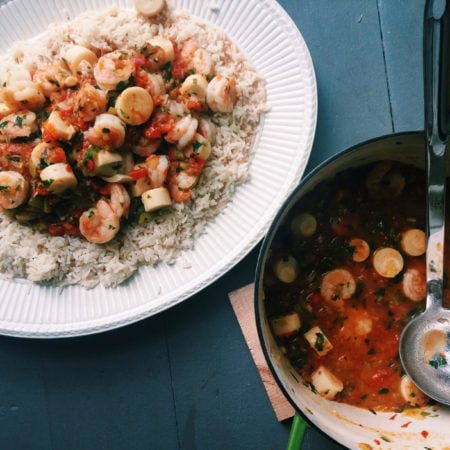