Tender-crunchy crostini are slathered with a spicy mayo and then heaped with slightly bitter sauteed greens.

Yet another recipe that is just a happy byproduct of a photo shoot, where we don’t like to waste anything, and are constantly looking to repurpose different recipe components in delicious and interesting ways.

Broccoli Rabe Crostini with Chipotle Sauce: Toasted baguette slices are slathered with a spicy mayo and then heaped with sauteed greens.

We had made some chipotle sauce to spoon over turkey burgers, which is one of the best ways to make turkey burgers into something hightly desirable.  And we had sautéed broccoli rabe (sometimes called rapini) for something or other – I can’t quite remember.  And we had some baguettes hanging around, because we were in a crostini place.  SO, it seemed only right to pull them all together into one of the best shoot snacks of the day.  And then it seemed only right to turn it into a bona fide recipe of its own.

An assort of crostini is one of the simplest and I think classiest (though I don’t think truly classy people use the word classy) ways to kick of a gathering, or just a special dinner.

Here Crostini with Chipotle Sauce and Broccoli Rabe is paired up with Crostini with Chimichurri Salmon Salad and classic Crostini with Tomato Basil Topping (crostini being a smaller version of bruschetta, which is similarly toasted bread with a bit of olive oil, usually with some sort of topping).  Tell me you wouldn’t be happy to be greeted by such a platter when you arrived at my house?

Other Recipes with Broccoli Rabe: 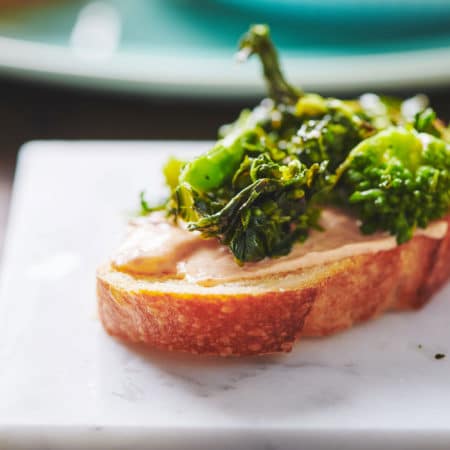 For the Broccoli Rabe:

For the Chipotle Mayo: