How to Make a Perfect Baked Potato 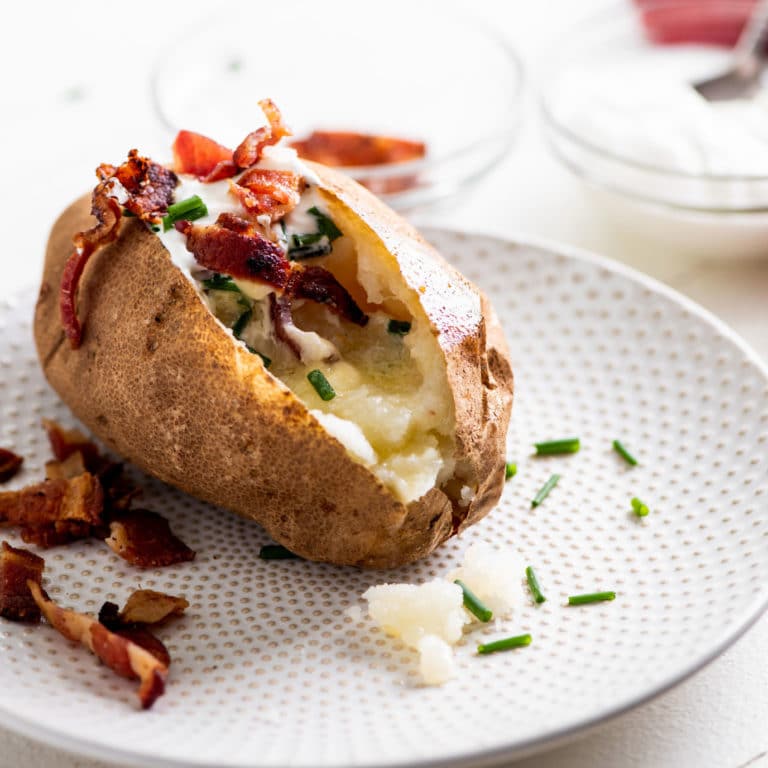 How to Bake A Potato

I have to say, I love what I do, I really, really do. I like writing, I like cooking, and I like talking about writing and cooking (and just talking in general).  But sometimes I find myself in a slightly strange moment, often having to do with a particular article or project, where I am cooking and writing about one particular thing, and lots of it.

My kids usually start off very enthusiastically, and then as the same food group presents itself over…and over….and over again, they start to wilt, and protest.

One of the most extreme versions of this was when I was asked to test every frozen and refrigerated cookie dough I could find, and conduct mini focus groups to rate them for flavor and texture. As you might imagine, the first couple of weeks were like a party everyday. But by weeks three and four, cookie fatigue (in fact, cookie nausea) had set in. Everything has a limit.

But a project a few years back was seriously enjoyable, and none of us got tired of it (and to be fair there were only about 14 iterations of this task, vs. 63 or so cookie doughs).  I was working on a piece about Ways to Top a Baked Potato, and it was just SO MUCH FUN. I found myself staring into the fridge, humming a little, imagining surprising combos. This certainly seemed like a robust reason to ingest copious amounts of sour cream.  And the possibilities were…and remain… titillating.

Baked potatoes are pure comfort food (also gluten-free in case anyone was wondering).  I think the two biggest hits were the Meatball Sub potato and the Taco Potato (not surprising), while I am planning to subsist at least partially on the Japanese Salad potato.

But this did also get me thinking that I have never really mastered the art of the perfect, simple baked potato: that ratio of oven temperature to timing, which results in a perfect baked potato, complete with chewy skin, cooked through interior that is ready to be fluffed and fluffed with a fork, and then paired up with any number of glamorous fillings.  A great Fork-in-the-Road dinner, and a good ways to use up leftovers, since everyone can top their potatoes as they see fit.

Or just a big fat pat of butter and generous sprinkle of salt, maybe some chopped scallions or green onions, or chives.  Pair them up with Rib Eye Steaks with Thyme-Garlic Butter (few things are more satisfying than a steak and baked potato dinner), Greek Roasted Chicken Thighs, or Horseradish Ginger Salmon, to name but a few delightful partners to baked potatoes.

Start with large, firm Idaho russet potatoes; sweet potatoes can also be baked using the same method.    Then once the potato is baked and fluffy – add some butter, some salt, some pepper, or make it a full on side dish or meal with any toppings you can think of.  Now the fun begins…click here for 10 Ways to Top a Baked Potato!

How to Make the Best Baked Potatoes:

Preheat the oven to 375° F. The baked potato oven temp is actually pretty fluid, from 350 to 400°F so if your oven is set at a different temperature go ahead and cook the potatoes at that temperature, just know they might take a little shorter or longer to become soft.  Wash and dry the potatoes, removing any “eyes” with a small sharp knife.  Prick them several times with a fork (or a skewer or the tip of a sharp knife), piercing the skin, to allow moisture to escape while they cook, and prevent them from bursting.

2. Bake potatoes as is or season them as desired.

At this point you can bake them as is, directly on an oven rack, or you can rub them with oil, and season with salt and pepper if desired.  In that case you can still place them directly on a rack in the middle of the oven, but place a baking sheet below them to catch any drips of oil.  Rubbing them with oil will get you a more crackly crisp skin.  I am not a fan of baking potatoes in foil, because I like a crunchy skin, but if you prefer a softer skin, then you can wrap the potatoes in foil before baking.

The cooking time will vary depending on size, but a fair estimate is that baked potatoes will take for about 1 hour to 1 hour and 15 minutes (if you have a bunch of potatoes you may need to add another 10 to 15 minutes or so to the cooking time, or again if the potatoes are quite large).  They are done when the skin is firm and crisp, but when squeezed the inside feels soft.  You can also insert a knife into the potato; when there is barely any resistance once you poke through the skin, the potatoes are done.

4. Make a slit on the top of potato and squeeze each end to open it up.

Remove the potatoes from the oven, and let them sit for a minute or two. Make a slit on the top lengthwise from one end to another.  Squeeze the potato on each end and it will open up (watch out for the hot steam rising).

You can fluff the insides with a fork if you like, and then it is ready to serve topped with whatever you like, from a pat of butter and salt to ….the sky’s the limit!  A traditional loaded baked potato will have a bit of butter, some sour cream, a sprinkle of chives or sliced scallions (green onions), and some crumbled cooked bacon.

Baked potatoes have about 150 calories for a medium sized potato (without any toppings, of course), and 5 grams of fiber (with the skin).  They are a good source of vitamins B6 and C, and potassium.  And they have no fat (yes, again, without any toppings!).

Baking a Potato in the Microwave:

While this isn’t my favorite method, because you don’t have the great crusty crispy potato skin, it sure is faster.  And yes, it’s not really baked.  You just want to scrub your potatoes and dry them.  then poke them with a fork so that they can release steam – this is very important, even more so in a microwave than in an oven (though it’s important there, too).  Steam builds up in the potato as it heats and without these little holes to release the steam it could explode – not all that fun to clean.

How Long to Microwave a Baked Potato:

Microwave your potato for 5 minutes, then turn it upside down (hopefully you have a rotating tray, if not, turn it around on the tray as well), and microwave it for another 4 minutes, and check to see if it’s soft enough.  Add more time as needed, 1 minute at a time.  If you are microwaving more than one potato at a time it may take longer.  Never put foil in the microwave!