How to Cook Perfect Quinoa on the Stove

A recipe for perfect fluffy quinoa every time - with tips, photos, and loads of ideas for how to use it! 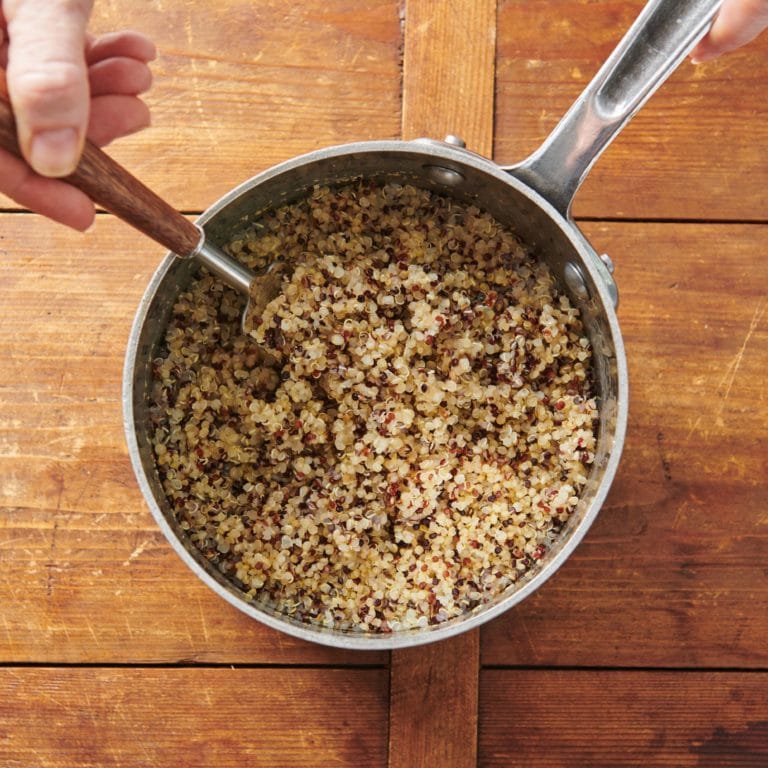 Quinoa (pronounced ˈkēnwä|) has been the “it girl” of the whole grain world for quite some time now. Even though we think of it as super popular in these times, it was a actually staple in the diet of the Ancient Incas, since it was able to grow in high altitude of the Andes. It’s actually a seed, but treated and cooked like a whole grain.

Quinoa is mild and delicious, with a satisfying texture, and takes beautifully to all kinds of seasonings and uses.

Also cooking quinoa is super easy—the most common way to cook quinoa is in a pot on the stove. It’s as easy (if not easier) than make a pot of rice, and it cooks up even more quickly, so it’s a terrific weeknight grain side dish.

How Healthy is Quinoa?

It’s got a crazy high protein count (8 grams of protein in a half cup of cooked quinoa), so it’s a boon to vegetarians and vegans; it contains a nice dose of fiber; and it’s gluten-free for those who have issues with gluten, which is a pretty big deal in the world of grains, many of which contain gluten.

A recipe for perfect quinoa every time.

How to Make Quinoa:

How Long Does Quinoa Take To Cook?

Cooking quinoa takes less time than you might think.  Quinoa cooks up much more quickly than most other whole grains, and any of us who have stood watching that pot of brown rice (which we love!) take its own sweet time to become tender will appreciate that.  About 15 minutes, and you’ve got quinoa.

Quinoa comes in different varieties, with different colors as well, which can be a lot of fun to play with, visually. White, red and black, are the most common colors/varieties available, and some brands make a rainbow quinoa, which is a blend of different colors. Cooking times vary from type to type, so check package directions.

How To Serve Quinoa

Quinoa can be used as a side dish, on its own or mixed with any number of add-ins – such as tossed with a sesame oil and honey dressing and some carrots, and topped with sliced avocado.  Perfect as part of a spread, or a lunch grain bowl all on its own.

Add quinoa to soups and salads, or use it as a nice base to scoop various stews and chilies over. It soaks up sauces wonderfully.  It’s great hot, warm or cold, and you can make up a big batch at the beginning of the week, and use it for days, heating it up for dinners, adding vegetables for a portable salad, and so forth.

Rainbow quinoa is a blend of white quinoa, which has a tasty slightly nutty flavor with even nuttier red quinoa, and black quinoa which has a bit  more crunch.   The grains cook in the same amount of time and the color combo adds extra pop to all of your quinoa dishes.  You can use the blend wherever you would use any single colored quinoa.

You can also freeze it in freezer proof containers or heavy duty zipper top bags – just press the air out, seal it up, and it will keep for months.

Some quinoa has already been pre-rinsed (the packages should indicate if it has or not), but this is a necessary step to remove the sponin, which is the bitter coating that occurs naturally as quinoa grows to protect it from being eaten by random wildlife. An additional rinse doesn’t hurt, so when in doubt, rinse.

Use a fine mesh sieve so you don’t lose any of the grains down the drain, and let cold water run over the grains for a few minutes, shaking the sieve and using your hand to move it around and make sure all of the grains get a good rinse. You do not need to soak quinoa before cooking.

This step is optional, but it really brings out the flavor in the quinoa. You simple place the quinoa in the saucepan over medium high heat and give it a shake and a stir every few seconds, for a total of about 4 minutes, until it is golden – watch carefully that it doesn’t burn. You can also heat up a couple of teaspoons of olive, vegetable, or grapeseed oil (per cup of quinoa) before adding the quinoa for even more flavor.

What is the Water to Quinoa Ratio?

For 1 cup quinoa, use 2 cups water

The ratio of quinoa to water is important.  Add the liquid to the quinoa in the pan, whether you’ve toasted it or not. The basic ratio is 1 cup quinoa to 2 cups liquid. You can use water (season it with a bit of kosher salt), or you can use any kind of broth. I like to use slightly diluted low-sodium broths (usually vegetable3 or chicken) and add any extra salt to the finished dish as needed so that the flavor of the grain shines on through. You can also add a bit of dry white wine to the liquid for another layer of flavor.

If you are making a vegetarian dish, make sure to use vegetarian broth or water.

How to Know When Quinoa is Cooked

Turn the heat to high, bring the liquid to a boil, then turn down the heat, cover the pot, and simmer gently until the quinoa is cooked, about 15 minutes. The liquid should all be absorbed, and the quinoa will be tender and have sprung a little tendril-ey shoot—which is actually the germ of the kernel—indicating that it’s done.

When the quinoa is cooked, remove it from the heat and let it sit, covered, for a few more minutes. Then give it a stir and a fluff with a fork to loosen it up. You can serve it hot, or spread it out in a rimmed baking sheet and let it cool for use in salads and other room temperature or cold dishes.

If you want a similar little bulleted list of info on How to Cook Perfect Rice on the Stove, well, just click here.

This is a recipe for basic untoasted quinoa—but if you wanted to toast it in the dry pot, or in a little bit of oil before adding the water, just see the step-by-step above. Different colors of quinoa have slightly different cooking instructions, s if there are specific directions on your packaging, follow those.

How to Cook Quinoa on the Stove

How to Use Cooked Quinoa:

What to Serve with Quinoa:

Quinoa goes with just about anything, Think of serving it anyplace you would serve rice or simply cooked potatoes. Try: 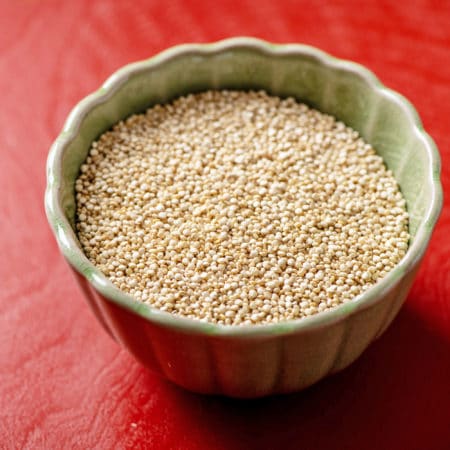 How to Cook Perfect Quinoa on the Stove

A recipe for perfect fluffy quinoa every time – with tips, photos, and loads of ideas for how to use it!
Yield: 4 People
Prep Time 2 minutes
Cook Time 15 minutes
Total Time 17 minutes