The colorful, classic restaurant salad is yours to make at home, savory and sweet, with lots of crunch. 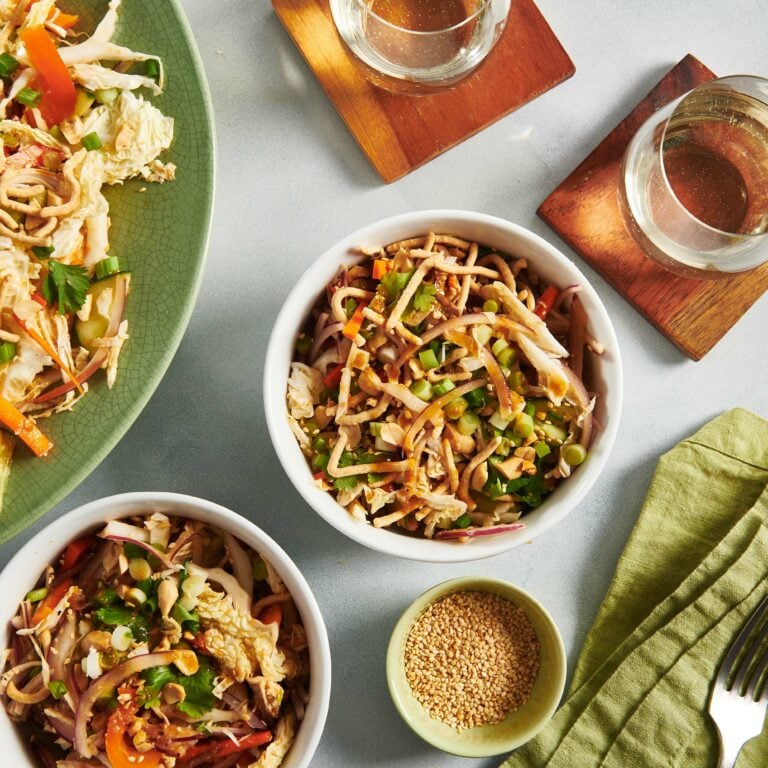 This is the kind of salad I can’t resist on a menu, and the fact that years after it came into “fashion” it still appears on many a restaurant menu means I’m clearly not alone.  If you find it on a menu at a place like the Cheesecake Factory, be prepared for a manhole sized platter piled high with chopped things to get plopped in front of you.  I literally can get breathless eating a salad of this nature — I get pretty into it.

Is this an authentic Chinese dish?  Um, nope.  In the 30s the first Chinese Chicken Salads started taking shape, but from all accounts they didn’t much resemble what we know as Chinese Chicken Salad today.  As the story goes, in the 1960s Madame Wu of the her eponymous renowned Chinese restaurant in LA made what we think of when think of this salad to fulfill a request for Cary Grant one night.  I’m not 100% what he asked for, if the salad itself wasn’t a “think” yet, but that’s one story.  Then there are competing stories involving different Chinese restaurants and chefs during the 1950s and 60s and the truth seems a little murky.

However, in a coda to the origin story, there is a story that feels a bit too familiar to many chefs from around the world.   The salad really became famous when Wolfgang Puck started serving a version on his menu at his LA restaurant Chinois, where it is served to this day.  At the time, the ingredients and combination was startlingly exotic.  And now it’s kind of become a retro-modern West coast staple.  Whatever story is the real one, it’s definitely fusion food at its core.

The Best Chinese Chicken Salad: The colorful, classic restaurant salad is yours to make at home, savory and sweet, with lots of crunch.

What is in Chinese Chicken Salad?

Chicken Salads almost always have something crunchy, something sweet, and something savory.  Many old-school Chinese chicken salads rely on lo min noodles and/ or nuts (often almonds) for crunch, and mandarin orange segments for sweetness.

I am no food snob but canned mandarin oranges are just not my thing — have at it if they are yours.   I included honey in the dressing for some sweetness, there are noodles and peanuts for crunch (I have tree nut allergies), not to mention cabbage, carrots, jicama or kohlrabi (optional), cucumber, and onion.  The dressing is savory with soy and sesame, and a little spicy from garlic, ginger, and hot sauce.

You can play around with this ingredient list as you wish.  If you don’t have one or two of the ingredients, worry not — you will still end up with a salad filled with texture, color and joy.

The creamy, flavorful, umami dressing is one of the best part, and key to making a killer Chinese Chicken Salad. The dressing contains:

You can either use purchased crunchy lo mein noodles in this recipe, or you can use ramen noodles. Inexpensive,easy to find ramen noodles are par cooked, so they are dried and crunchy, but fine to eat right out of the package, no boiling needed or desired here. Throw out that salty seasoning packet – you don’t want to use that in this salad. It doesn’t matter which flavor ramen noodles you buy, since they noodles themselves are all plain. the different flavor is in the seasoning packet that will be discarded, so any brand or flavor works fine.

How to Make Chinese Chicken Salad

Make the dressing: In a food processor add the soy sauce, vinegar, ginger, sesame oil, honey, garlic, and Sriracha.  Process until well combined.  Keep the motor running and drizzle in the oil slowly thorough the feed tube until everything is blended and nicely thickened.

In a large mixing bowl combine the cabbage, onion, jicama or kohlrabi (if using), cucumber, carrots, peppers and chicken.

Drizzle over the dressing and toss to combine.

Transfer to a serving bowl and add the scallions.

Then lo mein or ramen noodles.

And garnish with the cilantro. 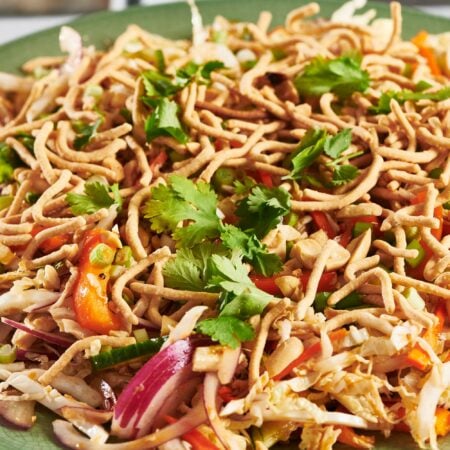 For the Soy Sesame Dressing

To julienne vegetable is to cut them into very slender little sticks, like very thin matchsticks. This term is usually used with firmer vegetables, such as carrots, beets or zucchini.