These are really nicely stuffed, and filled with all the good stuff. These could definitely function as an appetizer, but also seriously qualify as a meal. 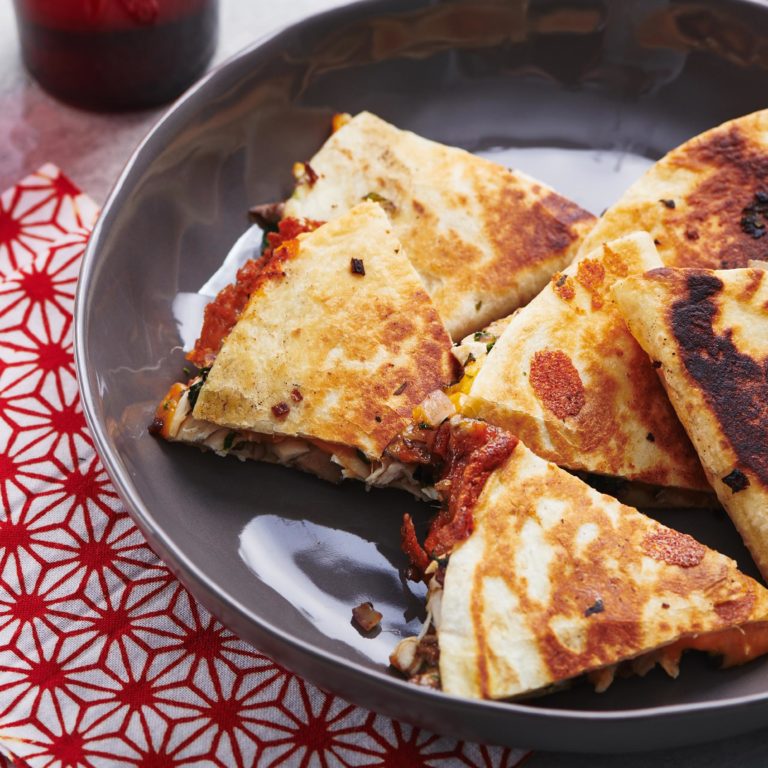 Another chicken quesadilla recipe, because they are one of the best foods ever, and one of the best ways to make dinner out of some tortillas, cheese, and whatever else in in your fridge at the time.

Don’t be shy with the sour cream and the salsa or Pico de Gallo and the guac! Just don’t. Not only am I a fan of the overstuffed quesadilla, I am also a fan of the accoutrements that often accompany quesadillas. One of my life mantras is that a few pieces of an over the top quesadilla well-endowed with stuff are infinitely better than a bunch of pieces of a scrawny quesadilla. I mean, yes, the tortilla has to be able to contain the filling, but beyond that I’m all in baby.

If you want to watch one of the most hysterical comedy bits about rolling up an overstuffed burrito at Chipotle (because I feel sure there have been many attempts to capture the tension-filled acrobatic act that is folding a burrito at Chipotle) you must watch Sebastian Maniscalco. I feel like I have been living under a rock, because I didn’t really know who this comic was until lasgt year, but now the scales have fallen from my eyes, and I have a new comedian crush. Which, by the way is purely platonic, but still quite potent.

These quesadillas are really nicely stuffed, and filled with all the good stuff. Don’t forget the salsa and sour cream!

Some quesadillas feel like an appetizer. These could definitely function as an appetizer, but also seriously qualify as a meal. Pair it up with a salad, and pass those bowls of toppings around.

Some cheese might melt out of the edges of the quesadillas during the cooking process. This is kind of desirable, I think, because it forms little patches of crusty cheese on the outside of quesadillas, which is salty and delicious, or when the pan cools you might get a few little crackley cheese wafers to nibble as a bonus snack. These are the things that make quesadilla cooks happy.

If you use baby spinach it will probably only take a minute to wilt into the mushrooms and onions. More mature spinach will probably take about two minutes to soften. 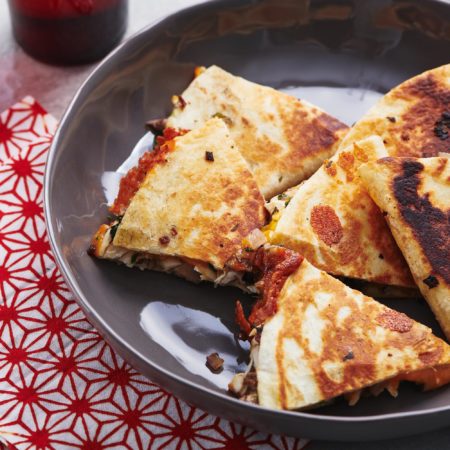 These are really nicely stuffed, and filled with all the good stuff. These could definitely function as an appetizer, but also seriously qualify as a meal.
Yield: 4 People
Prep Time: 15 minutes
Cook Time: 30 minutes
Total Time: 45 minutes