The combination of flavors and textures does a little happy dance in your mouth. 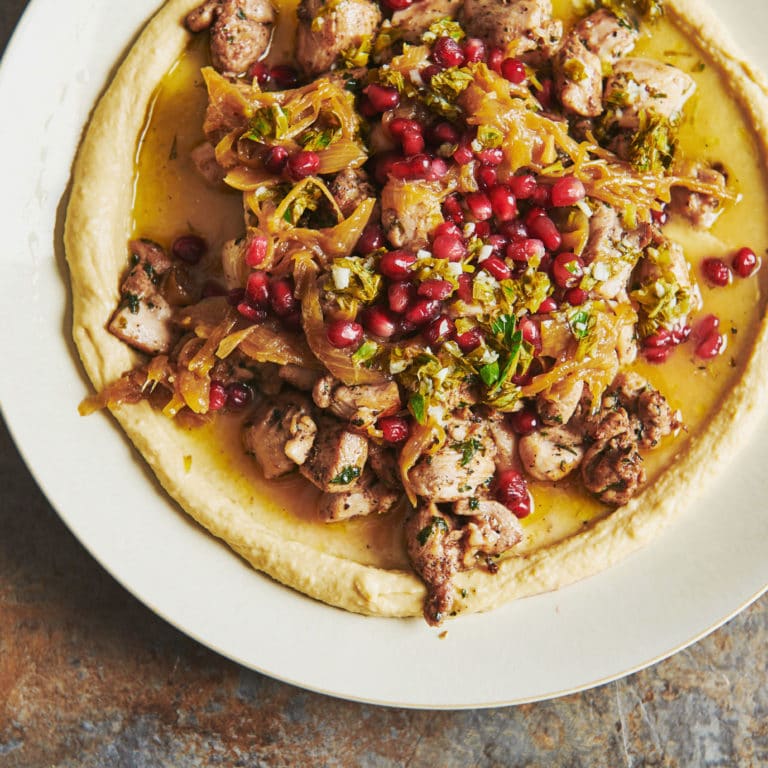 Chicken Kawarma is the recipe to reach for when you want to shake up the routine, and get out of the chicken rut for real!

My friend Chris Styler is such a damn fine cook.  I love to eat his food, I love to cook with him, and I love the fact that every once in a while we make plans to create some sort of themed meal and throw ideas and ingredients back and forth like bean bags, and finally end up with something quite awesome.

We usually pull the kids in, too—there have been homemade pasta nights, crostada nights, and on one memorable occasion, an all-souffle dinner, which was pretty much as overambitious and crazy as it sounds.  We were totally sober when we thought of it, too.

This adapted recipe was the result of an idea to cook an entire meal inspired by the cookbooks of Yotam Ottolengi and Sami Tamimi, which focus on food from the Mediterranean and Middle East.

It was a bit of a departure from my normal fare, but I had pretty much everything on hand (ok well, not the pomegrante seeds….), yet had never blended these flavors in this kind of combination.  No matter how often you cook, and how adept you are in the kitchen, we can all do with a little nudge to shake things up, push outside of the comfort zone.

(At this point I might do a little dance, something like the bastard step child of twerking, and my children would cower and hide their eyes, and never invite their friends over again).

And while I certainly respect the fact that my kids might not like everything I put in front of them, I was kind of elated and frankly surprised when they inhaled this dinner and asked for more.

Chris and I have called each other since just to reminisce about this recipe.  Normal people call each other to recapture about a great symphony or a wonderful party.  We might do that, too.

What to Serve with Chicken Kawarma Luckily I wrote down the ingredients as it came together, and it didn’t get lost in the overzealous sipping of pinot grigio that often accompanies our cooking sessions (us not the children).  We served it with the Endive and Radicchio Salad with Fresh Mozzarella, which also met with mildly astonishing approval from the entire peanut gallery (somewhat Mediterranean, but not really Israeli) .

Chicken Kawarma with Lemon Sauce over Hummus is inspired by Ottolengi and Tamimi—the combination of flavors and textures is magical and addicting.

The toppings are optional but the pomegranate seeds in particular provided such alluring burst of somewhat tart sweetness (and gorgeousness)  that you should go out of your way to get them.  You can now buy them already removed from the fruit, which is a convenience I am so happy to pay for.

Speaking of paying for convenience—if making your own hummus is one thing too many, just buy it.  Also if you don’t have the time to caramelize the onions, just slice one onion in half (red or yellow), and then very thinly into half moons and use that.  Different, but still delicious (and actually the bite of the raw onion would be super nice against all of the earthiness that’s going on in this recipe). 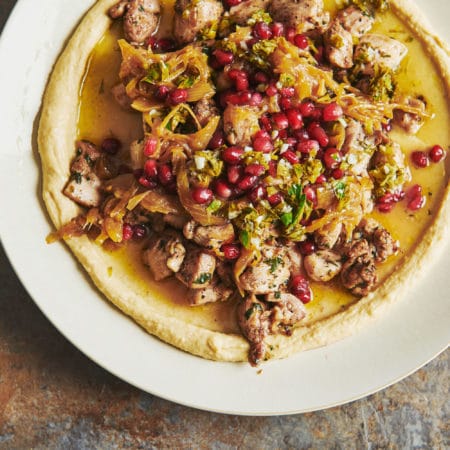 The combination of flavors and textures does a little happy dance in your mouth.
Yield: 8 People

For the Lemon Sauce

For the Chicken Kawarma