Loaded hasselback potatoes are brushed with garlic butter, stuffed with cheese, and topped with sll the fixings! 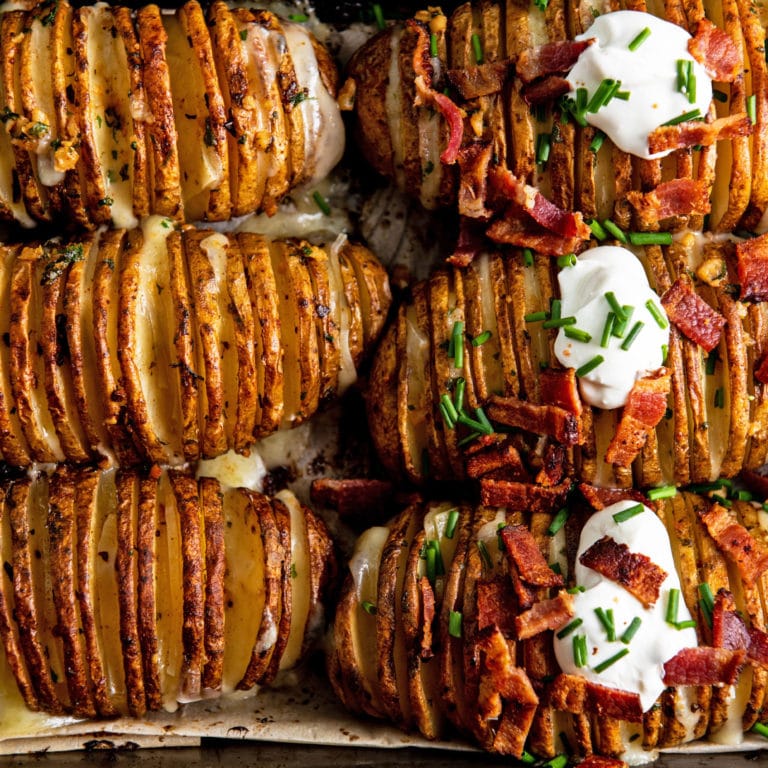 Have you ever seen a hasselback potato? My kids had not, and when Charlie saw it, and tried it, he said, “Please do not make potatoes any other way ever again.” And that my friends, is what people like me live for.

What is a Hasselback Potato?

As you’ve probably figured out from the photos, a hasselback potato is a potato that is thinly sliced—but not all the way through—before baking. The result is almost like a whole bunch of thick chewy potato chips lined up for the eating. Sometimes they are called accordion potatoes.

They are often brushed with butter or oil before baking, and I’m all over that with some garlicky butter. But with the loaded hasselbacks, things get even better.

How Did Hasselback Potatoes Get Their Name?

This potato dish originated in a restaurant in Stockholm, Sweden that has been around since the 1700s called Hasselbacken. Supposedly a student chef there named Lief Ellison invented them in the 1950, though as with many culinary origin stories there is dispute about both the inventor and the time frame. The location seems to be agreed upon, however – I mean, Hasselbacken….hard to argue with.

Just before the potatoes finish baking, you will slip a slice of nutty cheese in between every other slice of these peacock-like potatoes. The cheese will melt gently into the creamy-crisp potatoes, and the result is every bit as gorgeous and delicious as you might imagine.

How to Slice Hasselback Potatoes

This hasselback potato slicing technique is similar to the one I use when cutting bread for garlic bread. You create guardrails of sorts by using chopsticks, or the handles of wooden spoons, placed alongside the potatoes lengthwise. Then when you make your slices, the rods stop the knife from cutting all of the way down, without you having to be super focused about it. The slices will be all held together at the bottom of the potato.

This makes it easier to stuff or brush whatever you want between the slices and insert the slivers of cheese, and keep the potatoes together. The slices don’t have to be perfect; your hasselback potatoes will still look smashing.

How to Reheat Hasselback Potatoes

If you know you are making the hasselbacks ahead of time to be reheated later, baked them for an hour, but then take them out of the oven before you add the cheese slices. Reheat them in a preheated 425 degree oven for 15 minutes, then slip in the cheese, and bake for the final 5 minutes as directed.

If the cheese has already been added you can still reheat them in the oven for 125 to 20 minutes at 425 degrees, but the cheese will probably get very melty and drip out of the slices. I wouldn’t turn my nose up at one of these however, and I would use a spatula to scrape any melted cheese from the bottom of the baking dish and slather it over the top of the hot potatoes.

You know what this is? A vertical potato gratin!  I think Charlie may be right – this might be the best thing that can happen to a potato.

Ok, there are other good things that can happen to potatoes!

To Serve (all optional, pick and choose)