Two of my favorite vegetables, bound together in love and bacon. 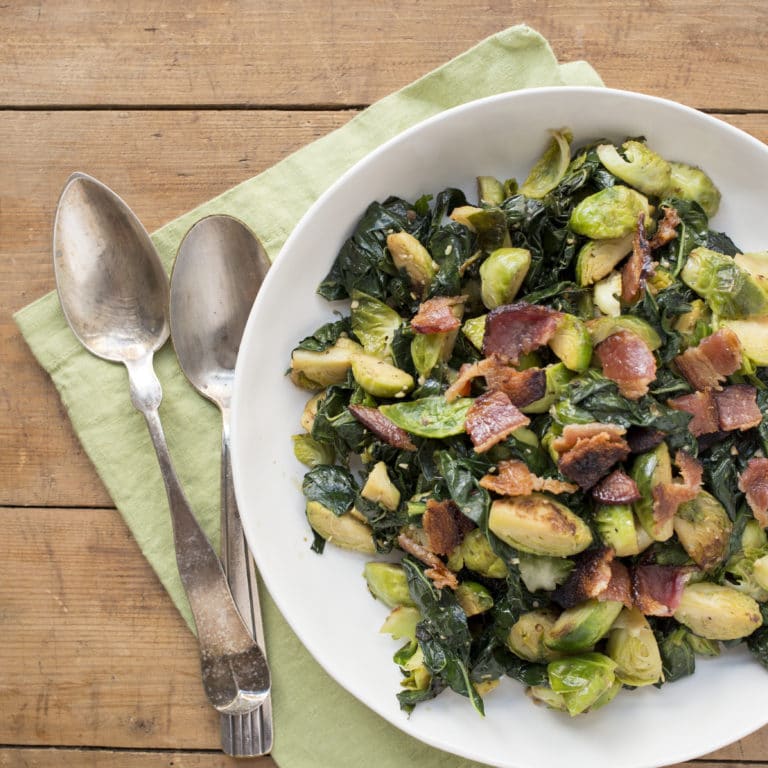 Like many people, I like to reward myself for eating healthfully with treats.  Sometimes I figure out how to do it in THE SAME DISH.   Such a good person for eating so much kale and Brussels sprouts….I deserve a little bacon.  Put that there right on top.

Like many great dishes, this was born of stuff that was lying around in the fridge.  Making something from what you have on had is one of the most gratifying ways I know of to cook.  You feel like a hero.  “I made this, from things I already had around?  And didn’t have to run to the supermarket?  Me smart.”

Sauteed Kale and Brussels Sprouts with Bacon: Two of my favorite vegetables, bound together in love and bacon.

Two bunches of kale in the fridge (no room for kale haters here, please move along).  A slightly sad looking container of Brussels sprouts that needed to be cooked in the near future, or forever hold their peace.  And a small container of crispy crumbled bacon, leftover from a spit pea soup that had come and gone.

(Hint: if you are sauteing or baking bacon for one recipe, make more than you need.  You will use it later in the week on pasta, in a casserole, in a quesadilla, in a pan sauce, in a frittata, in a salad.)

Did that photo with the Greek Turkey Meatloaf make you pause?  Here is the recipe for that.

The red pepper flakes and garlic provide heat and interest, but temper the amounts if you have people at the table who don’t like a little gasp of spiciness in their vegetables.  You can always pass more pepper flakes on the side.  Also, I used the leftovers of this recipe in a fantastic quesadilla with some pre-shredded Mexican blend cheese in a bag.  It was one of my favorite quesadillas ever.

Other Brussels Sprouts and Bacon Recipes: 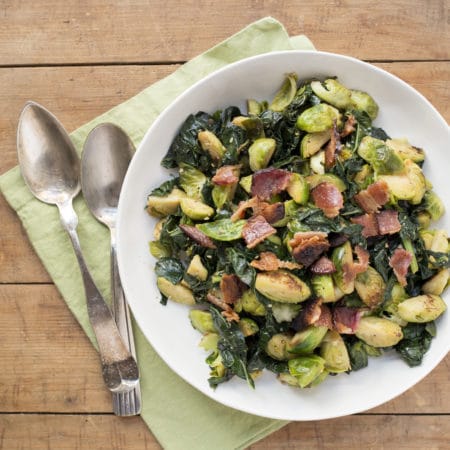 Two of my favorite vegetables, bound together in love and bacon.
Yield: 6 People
Diet: Gluten Free