Runny brie encased in a flaky golden brown pastry is an impressive and irisistible, but so easy to make. 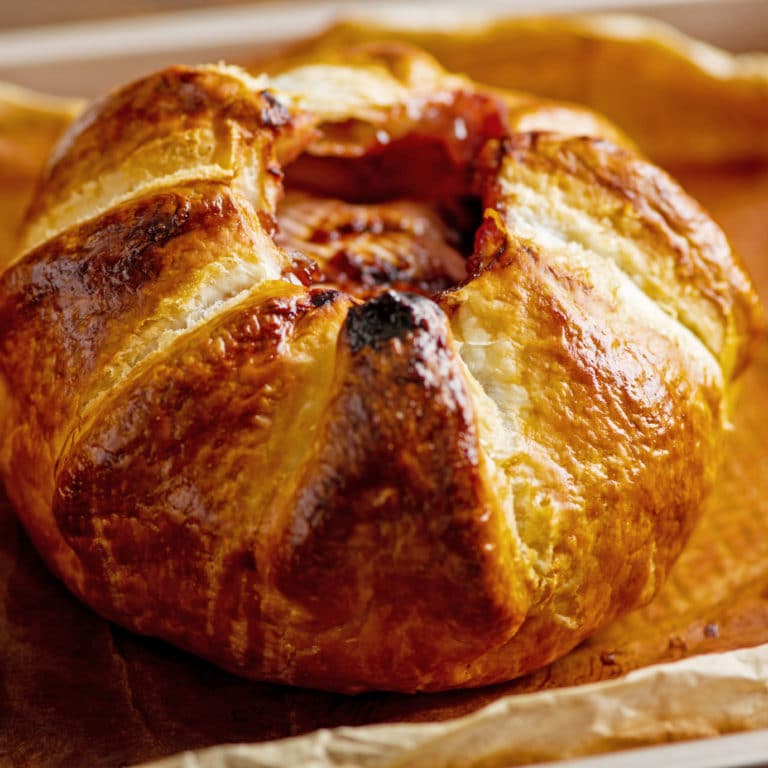 When I was growing up we had some family friends who we hung out with a lot—annual apple picking trips, holiday get-togethers, graduation parties and so forth. But there was the matter of the brie.

Do You Take the Rind Off the Brie Before Baking?

Nope, it’s edible! The husband and the children in the family were either under the impression that the soft, white, bloomy rind of the brie was not edible… or they just didn’t like it. But instead of doing what (now I am channeling my mother) “civilized” people would do—take a slice of brie, place it on your plate, and then cut off the rind, leave it to the side, and eat the creamy insides—they would take the serving knife and scoop out the creamy middle of the cheese, leaving behind an increasingly significant shell of rind for the rest of the crowd to enjoy.

My mother was having none of this, and at some point during the festivities she would swoop down upon the cheese platter and loudly say, “Who in the world did this to the brie?” She would then expound upon the edibility, nay, the desirability of the rind, to a deaf audience. And so it would go, over and over again.

One might wonder why she didn’t just stick to cheddar and alpine cheeses. But she was a classy woman, a Francophile no less, and damnit, there would be brie.

Maybe if she had taken another classic brie route, wrapping it in puff pastry, baking it until the insides were warm and runny, there wouldn’t have been the need for a rind détente after our gatherings. Don’t even get me started on the shrimp cocktail, and how many one should help oneself to, and how one should really know where to put the used tails.

The choice of jam is up to you. Here I used raspberry but apricot jam is another popular and delicious pairing. Also try fig, strawberry, peach or whatever cool jam you picked up at a farmers’ market last summer.

Chilling the brie before baking it for about 20 minutes ensures that the brie will not have liquefied by the time the puff pastry is puffed and browned—you want runny brie, not fast moving lava. You can also put it in the freezer for 10 minutes.

Brie en croute should be baked at 375° or 400°F; it’s a little flexible, so if you have your oven set for one of those temperatures for another reason, you can get that brie right in there. Just keep an eye on it and make sure it’s not getting too brown.

How to Pleat Puff Pastry

What does it mean to pleat the pastry? Basically you are folding the pastry in sections up over the top of the cheese, with some overlap every time you fold up a section. Gently inch the pastry together as you fold up the sections, without pinching too hard.

What to Serve with Baked Brie

Even though the cheese is wrapped in pastry, it still behooves you do serve with crackers or slices of bread, especially if it’s intended to be an hors d’oeuvres. It’s definitely a little carb on carb, but this isn’t exactly a reserved appetizer to begin with. You can also pair baked brie with dried or fresh fruit (think apricots, grapes, raspberries), toasted baguette slices, nuts, and then think about a great cocktail! Try a Pitcher Red Cocktail for the holidays, a Cranberry Orange Shrub, a Hot Toddy, or go crazy and blend up some egg nog milkshakes.

Is there anything more inviting than a creamy, runny, golden brown Baked Brie En Croute? SO easy to make; 10 minutes hands on time!

You can wrap up the brie a day or even two ahead of time and store it in the fridge until it’s time to bake.

If you have leftovers, you can loosely wrap it in aluminum foil and reheat it in a 350°F oven for about 10 to 15 minutes until the brie is runny again and the puff pastry is hot. 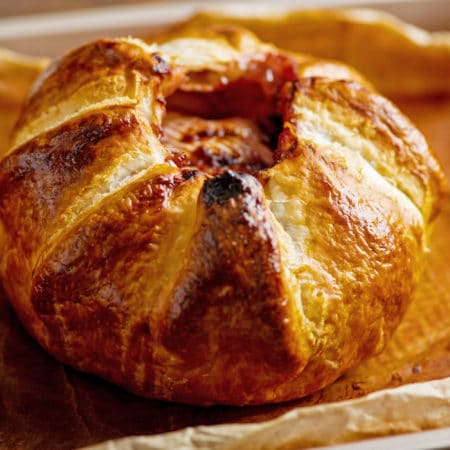 Runny brie encased in a flaky golden brown pastry is an impressive and irisistible, but so easy to make.
Yield: 12 Servings