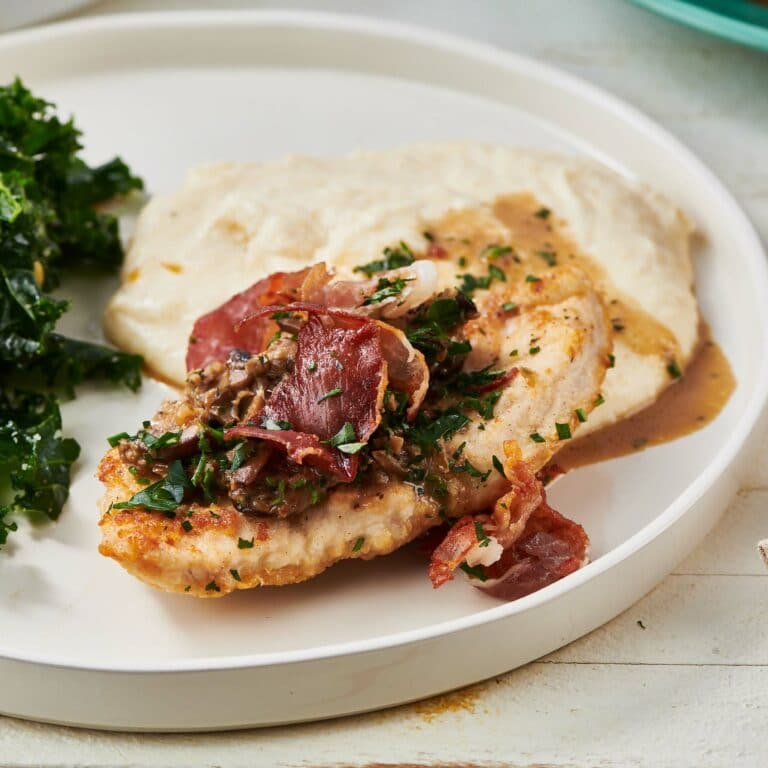 Wait — turkey marsala?  You bet.  Tender, flavorful turkey tenderloins take center stage in this classic Italian dish and hold their own perfectly.  The turkey is flavorful and tender and stands up to the savory, full-of-depth sauce.  You can such a nice layering of flavors by cooking everything in stages in the same pan.

This is a great change-of-pace main course for an Easter lunch or dinner, beautiful but also fast.  If you have a smaller group this Easter this recipe is perfect, but you can easily double it for a larger crew.  Just make sure that when you sear the cutlets you do that in two batches so they brown nicely and don’t just steam.  The rest of the ingredients and sauce can be double-batch made at the same time.

Turkey cutlets are just as easy to cook and versatile as chicken breasts.  They have a richer flavor, and are best cooked over medium heat, rather than high, so they stay tender and moist.  They might not brown much on the outside, but they are juicy and done as soon as they are cooked through.

You see that after you cook the turkey cutlets and after you brown the prosciutto there will be little browned bits stuck to the bottom of the pan.  That’s great; the caramelized bits will release and become part of the sauce, adding layers of flavor.  When the mushrooms are sauteed they will release some moisture before they brown, and after the shallots and garlic are added the marsala wine and chicken broth will incorporate everything into a rich sauce.

Avoid a nonstick pan if possible, which won’t allow for as much caramelization.

If your turkey cutlets are more than ¼-inch thick, you can place the cutlets between two pieces of plastic wrap and pound them gently with a meat mallet, rolling pin or a wine bottle until they are flattened and of uniform thickness.

What Kind of Mushrooms to Use in Turkey Marsala

You can absolutely use plain old sliced white button mushrooms in turkey marsala, but if you have access to different kinds, it’s nice to mix it up (literally, you can also use a mix of mushrooms). Try cremini (also called baby bellas because they are actually young portobellos), shiitake, oyster, chanterelle, or morels would be spectacular when in season.

If you prefer, you can use evaporated milk as an alternative to the cream.  It’s a great use to make use of those extra cans we might have hanging around after the end-of-year holidays.  Half-and-half or light cream work as well.

Adding a couple of tablespoons of butter at the end of the cooking process turns an already rich and savory sauce into something silky and lush.  It’s not much butter at all -just 2 tablespoons – but it makes the sauce shiny and emulsified and restaurant-level.

How to Make Turkey Marsala

Pound your turkey cutlets, if needed between two layers of plastic wrap until they are a uniform ¼-inch thickness.

In a shallow bowl combine the flour, salt and pepper. Dredge the cutlets in the flour mixture.

Cook the floured cutlets over medium heat until they are just cooked though, about 3 minutes per side.  Remove the turkey from the pan to a platter.

Return the skillet to medium heat, add the prosciutto, and stir until crisp.  Remove to paper towels to drain.  In the same pan, cook the mushrooms until browned, then add the shallots and garlic and stir for one more minute until you can smell the garlic.

Pour in the wine, and add the broth.  Stir until all of the browned bits come loose and the liquid reduces and starts to become a syrupy sauce.

Add the cream, return to a simmer, and stir in the butter until melted.

Season with salt and pepper to taste and stir in half of the parsley.  Pour the sauce over the turkey on the platter, and sprinkle with the rest of the parsley. 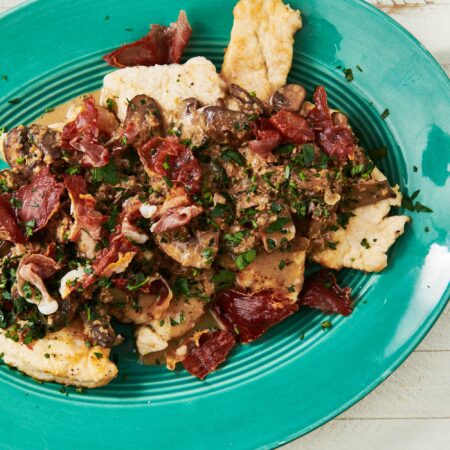 If you don’t have heavy cream you can skip it, or sub it evaporated milk or even half and half.

If your turkey cutlets are about ¼ inch thick to start with, there is no need to pound them. If your cutlets are more than ¼-inch thick, you can place the cutlets between two pieces of plastic wrap and pound them gently with the flat side of a meat mallet, or a rolling pin or wine bottle until they are flattened and of uniform thickness.