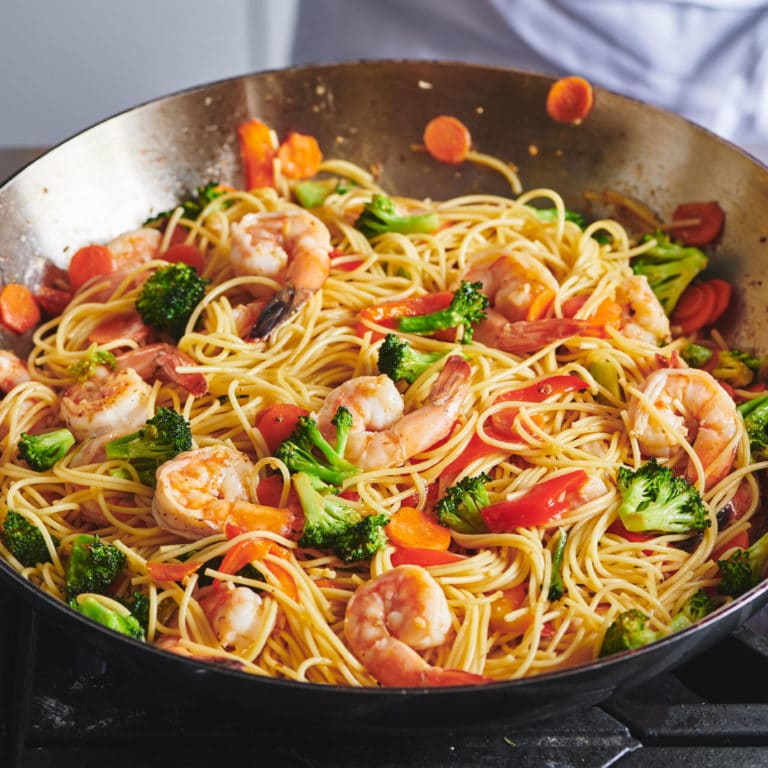 I have solidly documented Gary’s love of stir-fries on this website.  What I may not have done justice to is his love of stir fries that involve noodles.  If I say I am making a stir fry, or any kind of Asian food at all, he will look up hopefully and say, “With noodles?”  Slightly childlike, certainly predictable, but mostly endearing.

Lo mein is one of those dishes we can’t resist on a Chinese take-out menu, but that may not have made its way into your home kitchen.  It should—it is just a stir-fry with noodles.

Making it at home means that you can use much less oil than most restaurants do; this is definitely one of those dishes that seems to give off a real shimmer in some Chinese restaurants. You can make a shrimp lo mein at home that has a very moderate amount of oil, plenty of shrimp, and loads of vegetables. And it will be absolutely delicious, and fresh tasting.

This lo mein recipe happens to feature shrimp, but in two shakes you’ll see how you can make a vegetarian version, or a chicken version, or a steak or pork version of this ever popular Chinese-American dish.

Shrimp lo mein is made with long cooked noodles, mixed with shrimp vegetables and sauce. You can buy lo mein noodles in the Asian section of many supermarkets, or in Asian specialty stores. You might find them fresh as well. And you can order them online. Feel free to use spaghetti instead of the lo mein noodles.

Chow mein is made with fried noodles, and is usually crunchy. It typically doesn’t have as much sauce as lo mein. The noodles are also often thinner than those used in lo mein.

How to Make Shrimp Lo Mein

Start by cooking the noodles and setting them aside, and mixing up the simple stir fry sauce so they are ready to roll when you need them.  You can use either long spaghetti-thickness chinese noodles, which might be labeled lo mein noodles, or you can use spaghetti. Just cook them according to package directions and make sure not to cook them past just tender.

Then saute your shrimp, not until they are all the way cooked through, but just until they get a bit firm and pink.  Set them aside.

In the same skillet (or wok) saute some vegetables, in this case broccoli, carrots and red bell pepper.  You can also bump up the ratio of vegetables and shrimp to noodles, resulting in a meal that looks and tastes great, and does the right thing by your family nutritionally.  My kids never flinch at a vegetable when it’s in the context of a stir fry.

Use whatever vegetables you have around, and get the kids engaged in choosing which ones to swap in or add: chopped kale, asparagus, broccoli rabe, or cabbage, sugar snap peas, snow peas, spinach, other colors of bell pepper… pretty much any vegetables can work in this flexible dish.  You could also add a couple of teaspoons of minced fresh ginger when you add the garlic to the pan, for a bright, spicy note.

Return the shrimp to the pan.

And add the sauce, and stir to mix.  Then in go the cooked noodles and toss to combine everything.

Cornstarch is a thickening agent, and often added to recipes after being mixed in with a bit of liquid. When the cornstarch is heated in the sauce, it allows the sauce to thicken, thanks to its chemical structure, and the sauce can really cling to the noodles and vegetables in this recipe. In other recipes, such as fried chicken, it can be used (sometimes blended in with flour) to provide extra crispness.

You can use vegetable broth and leave out the shrimp for a fully vegetarian lo mein. You could also sauté the about ½ pound shrimp in one pan with a teaspoon of oil, and then add a teaspoon of oil to that pan, and to a second pan. When heated, divide the vegetables between the pan you used to sauté the shrimp and the second pan. Divide the noodles and sauce evenly between the two pans, return the shrimp to the pan you started cooking the shrimp in and you will have one version that’s vegetarian and one that features shrimp.

This is a nice opportunity to let kids pick the vegetables they like to include in this recipe. They can also peel the carrots, measure and mix up the ingredients for the sauce, and peel the shrimp (wash hands thoroughly before and after!)

What to Serve with Shrimp Lo Mein

This is absolutely an all-in-one meal, and there is no need to serve anything else. But, if you are looking to create a larger Asian-inpired spread, you can serve the lo mein with: 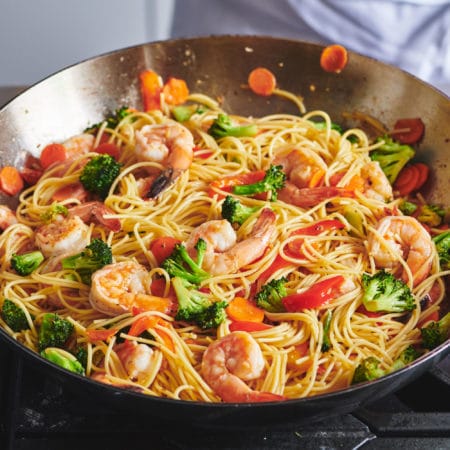 A healthy and quick shrimp lo mein recipe, colorful and so easy; perfect for a satisfying weeknight dinner.
Yield: 4 People