How to Defrost Shrimp 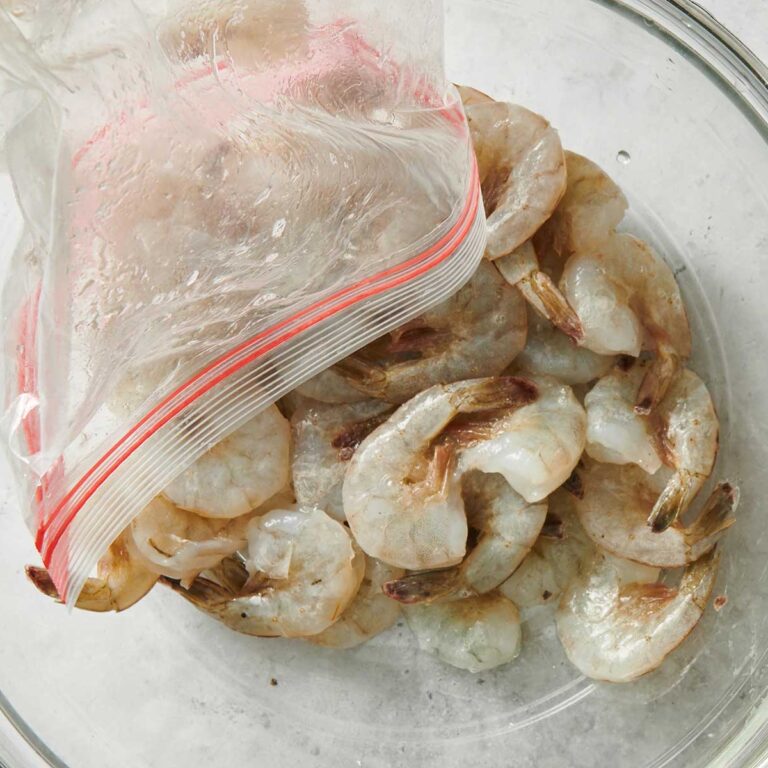 Frozen shrimp are a staple in my house, and because they defrost so quickly that means a great dinner can be on the table super fast. There are a few ways to defrost shrimp safely and quickly, and you’ll find the simple instructions right below.

Did you know that almost any shrimp you buy at a store have previously been frozen?  It’s true!  When you think about how long it takes to get shrimp from the waters (whether those waters are in the Gulf of Mexico or Asia or Central or South America or elsewhere) to the store that makes total sense.)  Also, even when you are buying shrimp from a fishmongers or seafood counter that are thawed and laid out on ice, they were almost certainly previously frozen.

Which is why you should never be apprehensive about buying frozen shrimp!  In fact, when you purchase frozen shrimp, you can have the ability to defrost them right before you cook them, so you know they will be at their freshest.  No need to race against the clock to cook those thawed shrimp within a day.  Simply defrost them yourself when you are ready to make your shrimp dish, and in a very short time, you’ll be ready to get cooking.

In short, frozen shrimp offer the most flexibility, the best flavor, the firmest texture, and perfectly great quality all around.  (I once got to go on a shrimp trawler in South Carolina and help bring in a haul of fresh shrimp – and then I froze them myself within an hour – talk about fresh frozen shrimp!  Three months later, they were spectacular).

How Long Will Frozen Shrimp Last

They will last for up to 9 months, but using them within 3 months will result in the best flavor and texture.  Buying frozen raw shrimp in the shell is your best bet: pre-peeled shrimp may have additives included to preserve freshness, while shrimp with their peels on are less likely to have anything added.  Also, pre-shelling and cleaning shrimp before freezing them can cause a loss of flavor and texture.

Avoid any frozen shrimp with dark spots, which indicate that the shrimp were less than fresh when they were frozen.

How to Defrost Shrimp: Having frozen shrimp on hand means that dinner is but minutes away. Here are the safest, quickest ways to thaw shrimp!

How Long Can Thawed Shrimp Last?

Defrosted shrimp should be refrigerated and used within 2 days.

There are several ways to defrost shrimp. The one you chose (below!) will probably depend on how quickly you plan to cook them!

How to Thaw Shrimp In the Fridge

Frozen shrimp will thaw in the fridge overnight, and this is the optimal way to thaw them.  You can keep the shrimp in their original packaging (if they are already in a sealed bag). Place the bag or package on a rimmed baking sheet or in a shallow bowl in case it leaks.  The amount of of time this will take depends on how big a block/package of frozen shrimp you have, and what size the shrimp are.  Larger shrimp will take longer to defrost.  And larger blocks or packages of shrimp will also take additional time.  As they start to thaw, breaking the shrimp blocks into smaller chunks will help them defrost faster.

But unless you have monster sized shrimp, or a massive block of shrimp, 24 hours should be sufficient.  When the shrimp are pliable, they are ready to use.

Once your shrimp is defrosted should place the thawed shrimp on a platter or board lined with clean dry paper towels to soak up additional moisture.  Removing additional moisture will allow them to cook better, whether they are searing up in a pan, or absorbing the flavors from a soup, sauce, or stew. If you plan to use them out of the shell, remove the shells and clean them before drying them on paper towels.

How to Quickly Defrost Shrimp

If your shrimp are sealed in a bag, you are good to go, but if the shrimp are not in an airtight bag, you’ll want to transfer them to a sturdy plastic bag with a secure zipper top closure.

Let sit for about 25 minutes until the shrimp are thawed.  Every so often, use your hands to try and separate the shrimp around in the bag without opening it, so that they defrost more quickly and evenly.  Remove the shrimp from the bag.

And however you’ve defrosted the shrimp you want to dry them before cooking so they will get nice color on brown a bit on the outside when you cook them (unless you plan on poaching them). To do this, peel the shrimp (unless you are planning to cook them in the shell). Spread the peeled shrimp out on a platter or board lined with clean dry paper towels to soak up excess moisture.

How to Devein Shrimp

The vein of the shrimp is actually the intestine (I know, ick). It can add a gritty consistency, and also look off-putting.  You can devein the shrimp before or after cooking them, depending on when you remove the shells.

First peel the shrimp. You can leave the tail on or off, depending on how to plan to serve the shimp. , Use a paring knife to slice down the back (the outer curve), cutting about 1/4-inch into the shrimp to reveal the vein. Remove the vein with your fingers, or scrape it out with the paring knife. Discard the vein.

Also see How to Sauté Shrimp.