Fall-apart tender chicken in a salty-sour sauce is one of the hallmark dishes of the Philippines, and for excellent reason. 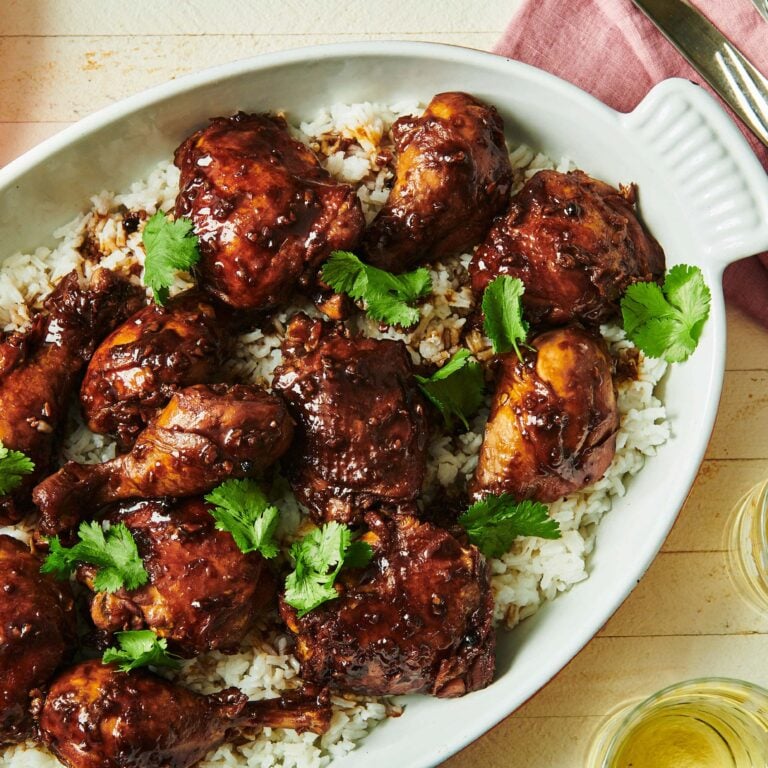 The first time I tasted chicken adobo, the national dish of the Philippines, I was blown away.  The salty sourness of the sauce, the fall apart tenderness of the chicken, it’s the kind of thing you want to eat often and quickly (sometimes finding yourself a little breathless and exhausted at the end of the meal).  I knew this dish had to become part of the dinnertime cannon.

Researching chicken adobo became a little project for me.   Two of my friends (sisters, and members of Team Mom 100) are Filipina on their mom’s side and there was no way I was going to put up this recipe unless I got their thumbs up.  There was a lot of reading, and even some right-in-the-moment texting for advice with Victoria and Cialina (and their mom!).  And after a few tries, I landed here, and not only got the thumbs up from my friends, but also their brother AND their mom, which I do not take lightly.

Adobo is a stewed dish, usually made with chicken or pork.  It reflects the Spanish and Mexican influences on Filipino food, but it has an emphatic level of sourness, which is one of the hallmarks of Filipino food.   I learned much about adobo and the flavors of the Philippines from “I am a Filipino: And This is How We Cook” by Nicole Ponseca and Miguel Trinidad, and if you are a fan of Filipino food, you should lay your hands on this book.

As with any beloved national dish recipes vary widely, and many cooks have little tricks and techniques that they use (and again, as with many coveted recipes, not everyone wants to share all of their techniques!).  If you talk adobo with anyone who grew up with adobo they will probably tell you their mom’s (nanay’s) or grandmother’s (lola’s) is the best.

There are two kinds of adobo: dry and wet.  In both cases the meat is marinated, but there are differences in the cooking process.

In a wet adobo, also called adobado (which translates to little sibling of adobo), the meat finished cooking in liquid, also becoming fall apart tender, but with the results being more stew-like.  The sauce thickens into a gravy like consistency.

There are also versions of adobo that fall somewhere in between the two – I landed in this dry/wet intersection for this chicken adobo recipe.

White meat is rarely used in chicken adobo.  As Victoria said, “Pinoy (a person of Philippine descent) don’t like white meat.”  Dark meat is juicier, more flavorful, and better suited to long and slow cooking than white meat, which can dry out.  You can use a combination of thighs and legs, or choose one or the other.

Chicken Adobo: Fall-apart tender chicken in a salty-sour sauce is one of the hallmark dishes of the Philippines, and for excellent reason.

You will want to use a wide-bottomed pan, like a brazier, as you want as much the evaporation of the liquid to be slow but steady.   A deep large skillet works well, a large Dutch oven is also a good choice, but avoid deeper stew or soup pots which won’t allow the liquid to evaporate at the pace it should for everything to get to where it needs to be at the same time.  A rondeau is the type of pan used in the Philippines for making adobo, shaped similarly to a brazier.

As with many soups and stews, it’s best to plan to prepare the dish ahead of time, and let it sit in the fridge for a day or so. Then when you reheat it gently, you’ll get a dish with the best expression of the flavors.  The flavors will meld together in a very rewarding way. Not that the adobo won’t be delicious right after you make it!  It will, but the dish will just have a deeper, more cohesive flavor which develops over a bit of time.

And the sourness from the vinegar will have a chance to mellow slightly – you still want it to be tart and sour, but the flavor should be pronounced but not overwhelming.  In the Philippines, chicken adobo is usually made the day before eating, as it really does improve with a day or two in the fridge

The presence of vinegar in Filipino food is a constant, one of the most prevalent flavors in the cuisine.  Vinegar was originally used not only as a flavoring but as a preservative.  Pre pre-refrigeration times, vinegar helped in preventing meat and other perishable foods from going bad.  And even now, with refrigeration, the vinegar helps the cooked adobo stay good for up to a week.

The most used type of vinegar in Filipino cooking is white vinegar made from sugarcane.  It is called sukang maasim, and it is slightly less acidic than distilled white vinegar.  If you can’t find it you can use white wine vinegar, rice vinegar, or cider vinegar.

Another vinegar used often in Filipino cooking is called sukang iloco, and it is a dark brown, made of the molasses that is left over from making sugar from sugarcane.    In the Philippines there are lots types of vinegars available, and if you have a good source for them, it‘s a fun way to play with your favorite recipes (and this one!).

Again, there are as many adobos as there are cooks, but there are some ingredients that make frequent appearances.  Soy sauce, garlic, black peppercorns, and bay leaves are staples.  Silver Swan is the most popular brand of soy sauce in the Philippines, thick and salty.  But you can use whatever soy sauce you have on hand.  Some people add an ingredient with some heat to their adobo, like chile oil, but my adobo advisors liked a milder, full on comfort food adobo. I definitely recommend this two-pack of the most popular vinegar and sauce sauce used in making adobo.

What to Serve with Chicken Adobo: 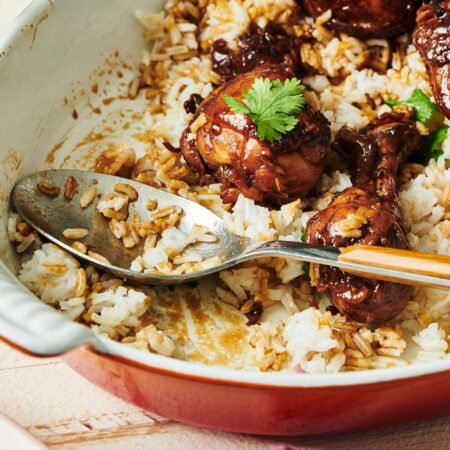 Fall-apart tender chicken in a salty-sour sauce is one of the hallmark dishes of the Philippines, and for excellent reason.
Yield: 6 People