A classic kugel recipe, just the right amount of dense and rich, with a sprinkling of raisins and a slightly secret ingredient from my grandfather. Perfect for Rosh Hashana or the break fast meal on Yom Kippur. 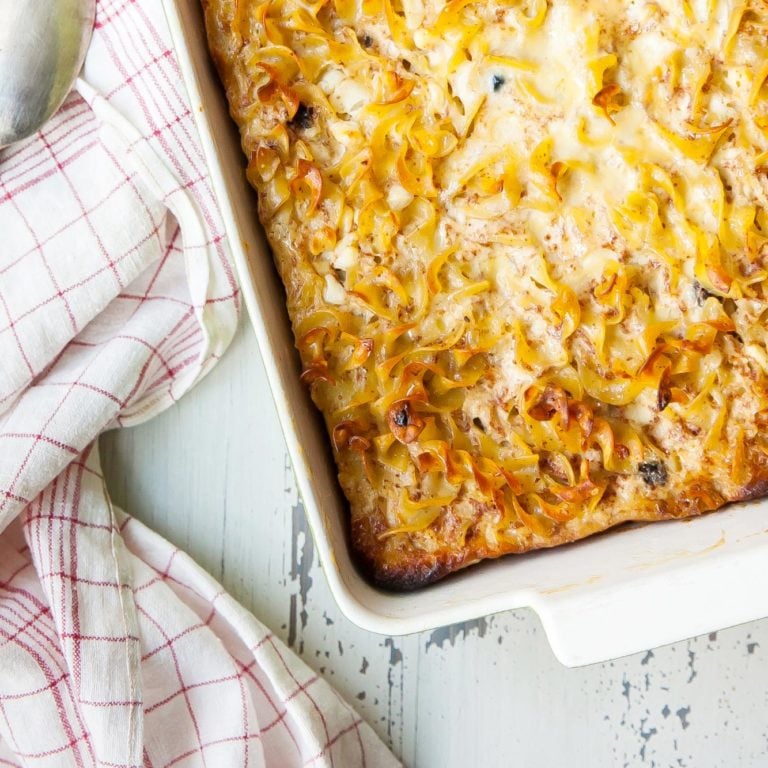 I have such nostalgia for noodle kugel, specifically the one my father’s mother used to make it. This is particularly notable because she wasn’t much of a cook, though her kugel was really quite good. My grandfather would hold up his pinky (a thing he did for emphasis) and ask us, “Can you guess what’s in here that makes it special?” “Orange,” we’d sigh. We had been down this road before. “Orange!” he’d say triumphantly, finger poking into the air. He never seemed to notice our lack of proper admiration for this smart addition to a plain old kugel. Now I get it.

I tested kugel after kugel recipe for months, chasing the memory of my grandmother’s kugel for my new cookbook, Dinner Solved!  And I finally got to the kugel I was searching for.  However, there is a coda to this story of nostalgia and food. When I made it for my mother, after finally feeling like I nailed it, she said to me: “You know your grandmother never made that kugel. Her housekeeper did.” Apparently I have nostalgia for my Nana’s housekeeper’s kugel. I think I’m okay with that; it’s the best noodle kugel.

What is Noodle Kugel?

Kugel is a Jewish dish, mostly eaten in Ashkenazi households, and while sometimes it is made from potatoes, it is often made with noodles, which is what my family always had.  It is typically served on shabbat, and also on Jewish holidays, like breakfast for Yom Kippur or Rosh Hashana (regular noodle kugels can’t be served on Passover, as noodles fall into the leavened wheat category, which is not ok during the 8 days of Passover).

A classic kugel recipe, just the right amount of dense and rich, with a sprinkling of raisins and a slightly secret ingredient from my grandfather.

The kugel can be baked up to 2 days before serving; reheat in a 300°F oven for 15 minutes or so. You can also make the kugel and refrigerate it unbaked for up to a day, and then bake it right before serving.

What to Serve with Noodle Kugel

Pair this with Beef Brisket with Wild Mushrooms or Jewish Brisket for a lovely Friday night or Rosh Hashana dinner (not a kosher meal, though!  I hasten to add…).  Or even Hanukah, though that’s not necessarily a traditional kugel holiday.  You could start with Favorite Crispy Potato Pancakes (Latkes).

Other Recipes for the Jewish Holidays: 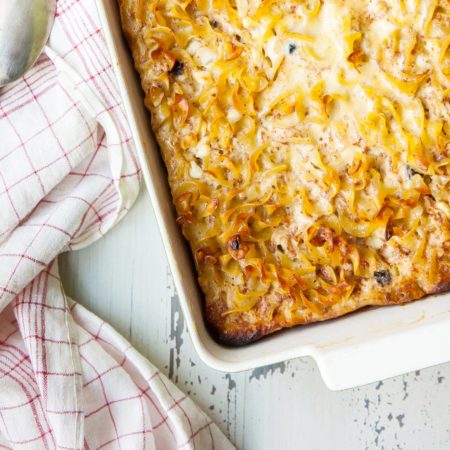