How to Cook Celeriac 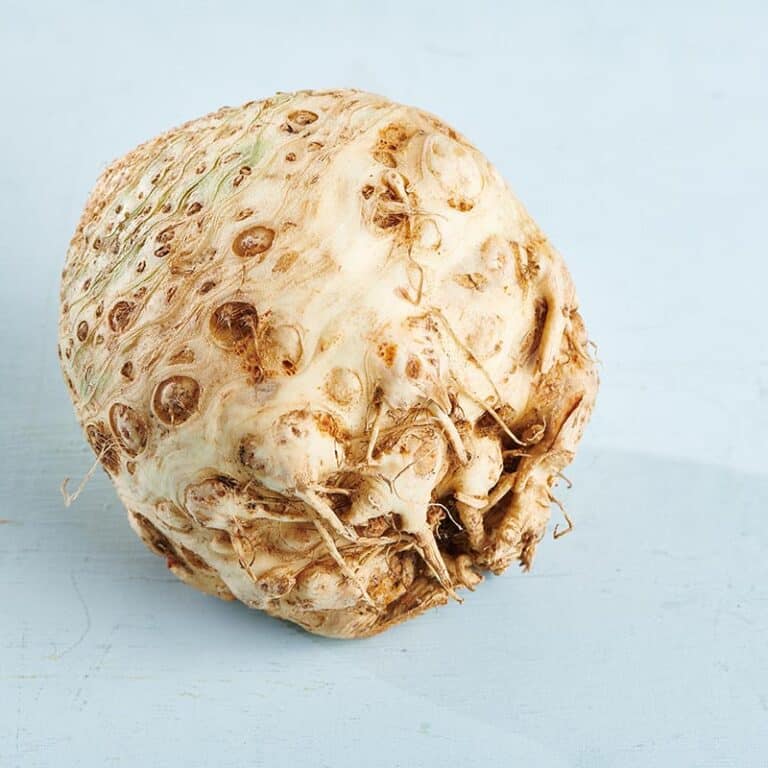 Celeriac is a large root vegetable that is eaten all over the world in many forms. Celeriac is actually the root that celery grows out of, and it is also referred to as celery root. It is super versatile because it can be eaten both cooked and raw. Because it has a relatively mild flavor, it can be a great addition to any dish and commonly used instead of potatoes as a more nutrient-rich option for mashed or pureed vegetables.

Celeriac is a lumpy bumpy vegetable, about the size of a grapefruit or softball.  It is easily identified when connected to the, but when sold alone in the market you’re looking for a brownish, rugged looking round bulb with little roots coming out of it that look like strings. The outside often looks be dirty, as many root vegetables appear to be from growing under the earth. The pale smooth interior is very similar looking to jicama, and should look quite uniform in color and texture.

Avoid celeriac that appears slimy or mushy or spongy inside (however, if part of the interior is still firm and smooth, you can cut away the less desirable parts and use that).

Celeriac is a large root vegetable that is eaten all over the world in many forms. Here’s how to buy, prepare, and cook celeriac.

Its taste tends to be earthy and nutty like some other root vegetables. The flavor is sometimes compared to a turnip but celeriac has a fresher flavor because of the subtle hints of celery flavor. Celeriac is super crunchy which makes it great on top of a salad or in a slaw. When cooked, celeriac becomes sweeter and softer. Because of that, celeriac is great mashed or used in a roasted preparation.

Celeriac can be a healthier alternative to potatoes: The texture and consistency is similar, but again celeriac has a more earthy flavor. In many recipes they can be swapped for each other.

Flavor-wise, parsley root is a great alternative to celeriac. When substituting, use an equal amount of parsley root compared to the original recipe calling for celeriac, though note that parsley root does have a stronger flavor.

In some recipes, mostly uncooked, you can use an equal amount of celery because it will have a very similar taste and flavor profile to celeriac.  The texture of raw celery is of course crunchy like the texture of raw celeriac, but celery will never soften the same way celeriac does during the cooking process, and has a stirinier texture. Cooked dishes will have different results, and cooked celery doesn’t mash up the same way.

In recipes where celeriac is used raw, jicama is a great substitute because it has the same crunchiness.  However, the flavor is not the same (jicama is fruitier) so, jicama is not a great alternative when cooked.  Since raw celeriac is usually used for its texture, in most cases you can swap in jicama or celery.

How to Cook With Celeriac

You’ll need to take a few steps to prepare your celeriac for cooking and eating. Use a knife to cut off the top and the bottom of the root.  Then use a knife, or a sturdy vegetable peeler to remove the rest of the brown bumpy skin.  A vegetable peeler will probably take a few passes, whereas a paring knife will allow you more control.  Then you can slice or dice or julienne the celery root in the way best suited to your recipe.

You want to use celeriac immediately after removing the skin when the preparation is done or it will start to brown or oxidize.  If you need to hold the celeriac, keep the vegetable submerged in a bowl of cold water with a few tablespoons of lemon juice mixed in to stop the discoloration.

How to Store Celeriac

Celeriac freezes nicely, as long as you blanch it first, which will help it keep from browning too much.  Wash, peel and slice the celeriac, then blanch it in salted boiling water for 2 minutes, then drain, and plunge it into an ice water bath to stop the cooking.  Freeze in a freezer proof sealable bag  with the air pressed out for a few months until you are ready to use.

Where to Find Celeriac

Celeriac is grown throughout the US so, you may be able to find it at a local farmers market, as well as at grocery stores and supermarkets.  Peak season for celery root is from fall to early spring, so keep your eyes open at the farmers’ market during those months of the year.

Some grocery stores will sell celeriac while it is still connected to the celery but most sell celeriac alone. It will be in the produce section with other root vegetables.